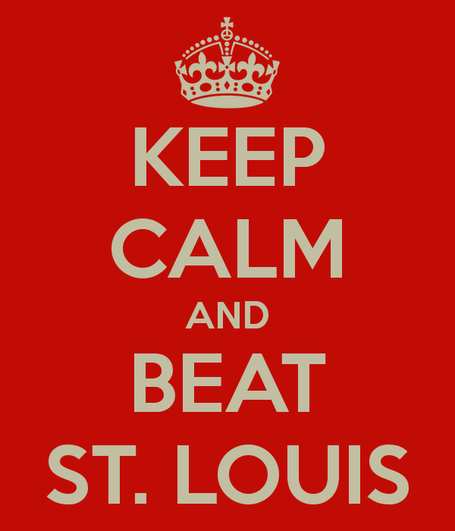 I don't think I've ever formally thanked St. Louis for beating Milwaukee in the 2011 NL Championship Series. Not sure I could cope with living in a world where Tony Plush had a shot at a World Series ring. So let's start off by saying: thanks for that, Cardinals.

That done, the two teams who face off here have a little bit in common, beyond fanbases sharing a strong dislike of Rickie Weeks. Both made the playoffs last year - though, of course, St. Louis fared rather better against Milwaukee than we did. This year, both teams are in possession of the best run differential in their division, largely due to productive offenses driven by an off-season outfield signing and a young first-baseman. But both currently find themselves languishing in third-place, pressing their noses against the playoff glass, and hoping for a good run down the final stretch to find them a way in..

The reigning World Series champions started off 2012 in much the same way as they finished 2011 - winning, at a rip-roaring pace. They won nine of their first dozen games and by early May were already 4.5 up in the Central, with a record of 16-8. However, for both that month and June, the Cardinals had a losing record, though they always just managed to avoid the psychological barrier of dropping below .500 - they're now 6-0 this year in games played with an even record. They've perked up of late, with a 22-15 record in July and August, and the Pirates' loss to the Dodgers means St. Louis are two back of Pittsburgh in the battle for the second NL wild-card.

St. Louis have the best offense in the NL, scoring 4.90 runs per game, two-tenths up on last season. It wasn't expected to be that way, as they lost arguably the best hitter in baseball over the past decade, Albert Pujols. Could they replace a .328 hitter, averaging 40+ HR and 120 RBI? Yes, they have. Last year, they got an .889 OPS out of 1B; this year, the figure is .875, with Allen Craig and Matt Carpenter both over .900 there. The team may have seen little out of Lance Berkman, but they signed Carlos Beltran, who is hitting .284 with 28 HR. Add in more or less repeat performances from the likes of Yadier Molina, David Freese and Matt Holliday, and the runs have been flowing.

The rotation has been very stable since Opening Day, using only six starters. The sole change was the result of Jaime Garcia hitting the DL with a shoulder issue, but replacement Joe Kelly has given them a solid 3.47 ERA in 11 starts. The problem has been far more the bullpen. It ends well enough, with set-up man Mitchell Boggs and closer Jason Motte owning a combined ERA of 2.43, so Arizona would do well not to be trailing late (the Cardinals are 56-2 when entering the eighth with a lead). But the rest of their relief corps has been a work in progress; in contrast to the rotational stability, they've used 16 different relievers, with a 4.28 ERA that's #10 in the league.

Mike Matheny has now replaced Tony La Russa as manager, so at least I don't have to figure out whether or not the pitcher is going to bat eighth. The above is based on recent line-ups more than overall position - Furcal was dropped down the order fairly recently. There is some flexibility - Matt Carpenter has started games at five different positions, and Craig at both corner outfield spots in addition to first. There's probably some platooning going on as well, but I'm not going to go that far into things. I have Monday Night RAW to watch, and let's be honest, you probably don't care all that much.

It's not certain at this point whether it will be Kelly, as the injured Garcia has been throwing rehab starts in the minors. With his last outing taking 75 pitches, there is a possibility the team will activate him, though it was reported the team may want one more tune-up before doing so. Kelly's last start was easily his worst, even if his defense didn't help him, with three of the seven runs allowed being unearned. Kennedy will also be looking to bounce-back, as his run of good starts came to a grinding halt at Chase on Wednesday, as the Pirates clubbed him around, proper-like.

Let's not forget Wainright was a top 3 pitcher in 2009-10, before Tommy John surgery.. Daniel Hudson should note Adam's first months back were shaky, with a 5.77 ERA over his first eight starts. The next eight, it came down to 3.77, and over his most recent seven, he has a 2.22 ERA. I think he's back. As for Joe, I predict he'll look really bad in one of the first three frames, prompting desperate GDT pleas for Gibson to put in Collmenter Zagurski anyone whose count of functioning limbs passes three, then proceed to shut out the opposition the rest of the way, allowing three runs in six-plus innings for his ninth quality start in ten attempts. In other words, Saunders gonna Saunders.

Yep. Lohse has allowed two earned runs or less More than two-thirds of the time (17 starts), and lost exactly twice in 24 starts this season. Ironically, those came against the worst teams in each league, the Astros and Royals. so clearly the plan should be for Arizona to show up wearing the uniforms of the 1899 Cleveland Spiders. I keep wanting to call Cahill our "Baby-Faced Assassin", but the the results over the past couple of months have been more like a "Baby-Faced Substitute Teacher". Nothing you can really take offense at, but allowing three or four runs almost every time out doesn't exactly generate wild enthusiasm.

Both teams need to win this series. I suspect one of them is likely to be disappointed. Ah, you don't get that kind of cutting-edge analysis on AZCentral.com, do you? I also get the feeling that there will be several "runs" scored in this game, possibly by both sides, and that there may even be some trotting around the basepaths, though don't quote me on that. I am unimpressed by our chances much against Lohse, and Wainright seems to be back to ace form as well - so if we don't take the opener, I've a feeling we could be booking tee-times by the weekend. Which is really odd, because I don't even play golf. St. Louis, two games to one.

For all your Cardinals (non-NFL) needs, please visit Viva El Birdos. They're a friendly bunch. [You may bump into snakecharmer....] And if you're reading this, ZM, we miss you. :)