Share All sharing options for: Diamondbacks 7, Nationals 4: Washington Falls Below The Gold(schmidt) Standard

Arizona pulled out the stops to avoid the sweep on Sunday afternoon, with an entertaining victory over the Washington Nationals. Paul Goldschmidt led the offense, driving in three runs and scoring two more, while Patrick Corbin took a shutout into the seventh inning, evening his record for the season at 4-4. What looked like a laugher, with the Diamondbacks 7-0 ahead after six frames, turned out to be a little more dramatic in the end. However, J.J. Putz picked up his 22nd save of the season, getting the final out with the tying run at the plate, and Arizona moved back above .500, though lost two of three on this short home-stand.

Harper got a one-out single - though if John McDonald had made a decent throw to first, he'd have been out, so some Bryce-enamored scoring there. Amusingly, after the ball skidded past Goldschmidt, Harper tried to turn for second, but ended up running into an immovable object, in the shape of first-base umpire Mike Muchlinski. Remember that video of Stryker Trahan checking a runner, from a couple of weeks back? It kinda looked like that. Seemed to knock Harper silly, as he then got himself picked off, falling down to the ground as he tried to start a rundown, and just sitting there like a sad clown base-runner, bro'.

Lessons could have been learned from Goldschmift in the second. A similar situation - throw short-hopped by an infielder to first - was, for some reason, scored an error, and Paul managed to avoid colliding with any officials as he made his way to second. He then swiped his 11th base of the season by taking third, and when the catcher's throw sailed into left-field, Goldschmidt was able to trot home, putting the Diamondbacks on the board. His 11 stolen bases are the most at the position in the National League, and the most by an Arizona first-baseman since Travis Lee had 17 in our inaugural season.

Goldschmidt was just as instrumental in our next two runs, in the third inning. Chris Young had doubled down the left-field line, and Jason Kubel became the second D-back plunked on the afternoon. Goldzilla brought both men home with his first hit of the series, taking a hanging 0-2 pitch and ripping it down the line for a double. Another extra-base hit, off the bat of Aaron Hill made it 4-0 to Arizona in the bottom of the fifth, and one batter later, the Nats pulled their starter, Ross Detwiler - his final out was a screaming liner right back at his face off the bat of Kubel, trapped through sheer, instinctual self-preservation.

The Diamondbacks hadn't finished punishing Nationals' pitching that inning, however. With two outs, Goldschmidt drove in his third run of the day with a single back up the middle, then Justin Upton and Miguel Montero produced back-to-back RBI doubles, to make the score 7-0 for Arizona, breaking the game wide open. That was the end of the meaningful offense for the home team, with a Chris Young walk being the sole base-runner for us the rest of the way. We scored our seven runs on only six hits, the lowest number in a taco-producing game by the D-backs for almost four seasons, since August 20, 2008.

Meanwhile, Patrick Corbin was putting on an absolute pitching clinic. Harper's first inning "hit" was the only base-runner he allowed through six innings, and he was subsequently picked off, allowing Corbin to face the minimum. Patrick set down 16 in a row, and was also being economic, taking 66 pitches through the middle of the sixth. It's hard to say exactly what has changed since Corbin first came up, and posted an ERA of 5.73 over his first four appearances. He seems to have better control, with a K:BB of 19:5 this time in the rotation, compared to 18:9. first time he was there.

The Nationals did get to him for a couple of tallies in the seventh - I blame the blasphemous wave, which could be seen rippling its way around Chase during the frame. Though I'd also reckon one of those should have been unearned, with Montero failing to corral a near-perfect two-hopper from Jason Kubel on a sacrifice fly. Still, Corbin tied his career high with seven strikeouts, walking none, and being charged with two runs over seven innings, on four hits. That's a total of four runs over nineteen innings in three starts, a very impressive 1.89 ERA. With every start, it seems more likely he's in the rotation for good.

The bullpen made things rather more interesting than I think we'd have wanted. Matt Albers worked around an error by Chris Johnson to strand two men in the eighth, but Takashi Saito retired one of four batters faced, being charged with two runs and leaving with a man on first and one down in the ninth. With the tying run on deck, J.J. Putz came in for what was now a save situation: he got the next batter, but then issued his first walk in over a month to bring Roger Bernadina up as the tying run. A nice, high fastball took care of the last Washington hope, and Arizona had successfully avoided the sweep, ending Washington's winning streak at eight games. 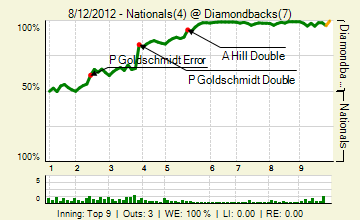 Another lightly-trafficked Gameday Thread, with AzDbackfanInDc having more than twice the comments of the next-placed grimmy01, with hotclaws taking the bronze. Also to be seen: CoachD11, kishi, 4 Corners Fan, soco, onedotfive, CaptainCanuck, Tucson d-back fan, Clefo, asteroid, Jim McLennan, xmet, txzona, dbacks79, Turambar, Augdogs, Bryn21, Rockkstarr12 and snakecharmer. Comment of the day goes to Turambar, who got to enjoy this one in person, courtesy of another generous ticket donation.

at game, thanks for tickets

"I could have been king, but in my own way I am king. Hail to the king baby." Ash from Army of Darkness

With the Giants having just put a five spot up on the Rockies (and are still batting in the eighth), to take a three-run lead, it looks like we will stay five games back of the NL West leaders. It's now San Francisco's turn to face Washington, while we go back on the road, with the first stop being St. Louis on Tuesday, after a travel day tomorrow. There will, as usual, be plenty to discuss on the 'Pit, game or no game!