Well, that happened. It was Miley, it was SnakePitFest, it was... some poor fielding and a loss to ensure a losing series. C'est la baseball, I suppose. I figured that while I may not have been able to attend the festivities over at Chase today, I may be treated to a solid, well-fought game, one in which we proved our mettle against one of the NL's elite. Yeah, well. Hit the jump to read the details; unfortunately, there are no Chris Johnson heroics or Jason Kubel bombs to speak of, just a really lousy inning of doom. Maybe you guys should have spent your time heckling the fifth.

It didn't look great for our RotY-to-be at first, nor did it look good for our defense. Unfortunately, these are two things that really didn't ever look good throughout the night. Danny Espinosa slapped a one-out single to left, then scored on a Ryan Zimmerman double that Justin Upton allowed to roll by him. There's a solid chance that Espinosa would have stayed put had Upton played the ball correctly, and the play was ruled E9. A run nonetheless, however, and the Natinals were up 1-0.

The Nats held that 1-0 lead for approximately one batter in the bottom half of the first, as Aaron Hill murdered the second pitch he saw from Edwin Jackson for his fourteenth homer on the season. The Diamondbacks took a lead in the second on a double from JUp, a triple from Miguel Montero, and an RBI single from Stephen Drew, then tacked on more in the third on a Chris Johnson sacrifice. It was all rainbows and butteflies through four -- Miley had yet to give up an earned run, and his team was carrying a 4-1 lead over an NL East juggernaut. Then the fifth inning happened.

Bunt single. Sacrifice from the pitcher. RBI double. Error by Chris Johnson (you don't say?!) to load the bases. Two-run single. Pitch in the dirt, then an overthrow to second from Miggy. Another RBI double. And, hey, let's throw in a walk. It was now 5-4 in favor of Washington, and that was enough to get Miley out of the game. Newly called-up (again) Brad Bergesen allowed one of Miley's two runners to score, but stopped the bleeding at 6-4. All told, it was a five-run inning for the Nationals. It was much more painful to watch than read, and I'm sure it was more painful to view it live than it was to watch online.

The game, looking bleak, would go on to the later innings, Diamondbacks trailing 6-5 after a pinch-hit RBI double from Ryan Wheeler in the sixth. The game progressed to the ninth, the score (ok, I guess the Washington bullpen) refusing to budge. Just three outs left to tie things up -- what were the odds of that, when the offense seemed incapable of overcoming such a titanic lead the four innings prior?

It was a perfect set-up. It was SnakePitFest, the night where the best of Diamondback fans joined together to cheer on the team they all love. Better yet, the heart of the order was coming up for the Diamondbacks - Hill, Kubel, and Goldschmidt would all get a crack at Tyler Clippard, each representing the tying run in the worst-case scenario.

Yeah, well, it pretty much went worse than whatever "worst-case" you can think of. Five pitches, three flyouts, ballgame. :( 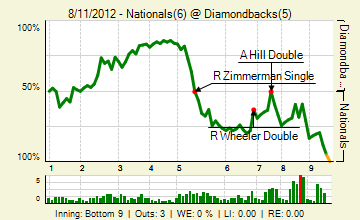 Jake Elmore also got his first crack at the majors, flying out with two men on and one down in the eighth. It earned him a -12.0% WPA. Whoops. The GDT was unsurprisingly quiet, pulling in just a bit over 300 comments on the night. No one managed to hit sixty comments, with dbacks79 coming the closest at 57. Also present: asteroid, Bcawz, txzona, piratedan7, Augdogs, marionette, onedotfive, TylerO, egboyz, 4 Corners Fan, jwimh3, BigPapaKishi, LiamNeeson, CaptainCanuck, Tucson d-back fan, Jim McLennan, hotclaws, xmet, and Muu.

I was originally going to give Comment of the Night to Clefo, but a) he always wins and b) it wasn't actually in the GDT. So, piratedan7 wins, and also doesn't need any context:

Let's try and avoid a sweep tomorrow. Detwiler vs Corbin, 1:10 start. The Giants won today, while LA lost; we're now five back from first, and four from second. Let's ignore the Wild Card for now. I fully expect pictures and stories from tonight's SnakePitFest, so to those that attended: get workin'.