Prologue - Take Me Along

The time: A mid-August evening.
The place: A southwestern baseball field.
The setting: A team just home from a cross-country, 10-day road trip faces the team with the best record in baseball. The home team is four games back of the division leader, and to be the best, you have to beat the best, and every game counts from here on out, and other clinches.
The players: A struggling sinkerball pitcher vs one of the phenoms of the current age.

It was a two-faced kind of night for starter Trevor Cahill. He had his sinker working early and often. He got two strikeouts in the 1st inning and grounded out the side in the 2nd, though the 2nd inning also consisted of a two-out double and walk.

The Nationals scored first in the 3rd inning when Steve Lombardozzi tripled (on some really poor defense by Gerardo Parra) and Bryce Harper hit a deep sacrifice fly. Cahill followed that up with two two-out walks, neither of which scored, thankfully. So while the game was only 1-0 in favor of the visiting Natinals, Cahill was already up to 60 pitches after three innings.

Stephen Strasburg was turning out to be exactly who we thought he was. He worked very quickly and had fairly solid command of all his pitches. He had a 1-2-3 1st inning and worked around two-out walks in the 2nd and 3rd innings. He had a bit of an adventure in the 4th when, with two outs and Upton on first via another two-out walk, home plate umpire Dale Scott was hit in the head by a Miguel Montero foul tip. The game was delayed while he left the field and C.B. Bucknor took his place behind the dish. When intermission was over play resumed, Montero worked a walk, then Chris Johnson laced a single to left for the Dbacks' first hit and their first (and only) run to tie the game up.

Strasburg resumed form by striking out the side in the 5th. He finished the night with six innings, one run, one hit, four walks, and six strikeouts.

The Nationals got their lead right back in the 5th inning. Lombardozzi was again on base, and Ryan Zimmerman smacked a two-out home run half way up the left field bleachers. Michael Morse homered to lead off the 6th and put Washington up 4-1. Cahill's night: six innings, four runs, six hits, three walks, four strikeouts, and the big bugaboo as always, two home runs.

Matt Albers, also making his Chase Field debut, pitched a rocky 7th inning. His first two batters singled (Lombardozzi, again) and walked (Harper), then Adam LaRoche reached base (and Lombardozzi scored) on an error that was given to Stephen Drew but really should've been given to Albers.

Takashi Saito pitched a clean 8th inning and we headed into the top of the 9th inning only down 5-1.

I say "only" because it got worse, yes it got much much worse. Mike Zagurski was brought in to pitch, and if your first inclination is to groan and hide your head in your hands, you are not alone. Tyler Moore doubled on Zagurski's first pitch, the Lombardozzi singled again. Harper hit his second sac fly of the night. Zimmerman, up with two men on and one out, only walked. LaRoche doubled in Lombardozzi, and after Morse struck out, Jayson Werth doubled in Zimmerman and LaRoche.

Why was Zagurski still pitching when it was clear he didn't have what it took to get three outs in the 9th inning of a game where your the team is already behind four runs? Because why waste an arm when your team is now behind by eight runs, is my guess. Brad Ziegler eventually started throwing in the bullpen, but wasn't needed.

Jason Kubel doubled (on a ball horribly misplayed by Roger Bernadina) to lead off the 9th inning and pinch-hitter John McDonald beat out an infield single. (These were Arizona's second and third hits of the entire ballgame; the first came in the 4th inning.) With two on and two out for Chris Johnson, all hopes were on the New Guy to at least make the score respectable, but, it was not to be.

It was one of those nights, those nights where even the prospect of fireworks didn't keep all of the 29,000+ fans around for the nightcap. The kind of night where the prospect of catching the now-division-leading Dodgers, five games up, is ever more daunting. The kind of game where your hopes just keep dwindling and dwindling... just like the slope of the fangraph... 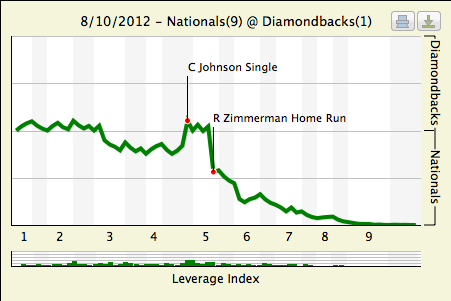 Forget keeping fans in the stadium, we couldn't even keep people in the gameday thread. Even DC left early. During the sinking of the Mike Zagurski ship, it was absolutely quiet in there. For several minutes. You know us, that never happens. Clefo took home the Tony award, DC was runner up, and asteroid checked in from the row behind the Diamondbacks dugout for third place. All present were: AzDbackfanInDc, asteroid, Clefo, snakecharmer, piratedan7, hotclaws, txzona, Bryn21, DbackCardsFan, Jim McLennan, dbacks79, GuruB, 4 Corners Fan, Fangdango, Rcastillo, CoachD11, CaptainCanuck, rd33, Marc Fournier, xmet, PatrickPetersonAZ, jjwaltrip, and morineko.

After Clefo went on an MST3K tangent, piratedan had this important piece of advice.

Many props to Clefo for helping me with theatrical references and fielding all of my stupid questions. At least tomorrow is Saturday, which means home Saturday black unis and SnakePitFest Day. It's a 5:10pm start time, when Rookie of the Year candidate Miley faces former Diamondback no-hitter pitcher Edwin Jackson. Get your programs, get your programs........