First and foremost, I'd like to apologize to the native (or competent) Spanish-speaking SnakePitters out there. I took two years of Spanish in high school, so that title seemed accurate (enough) for me. Tonight was lucha libre mask night at Chase Field, as most of you probably know; I'm sure we can all agree on two things regarding the matter, one, that Diamondback lucha libre masks are awesome, and two, those that disagree clearly just fail to get it.

Trevor Cahill -- who'd pitched very well against the Dodgers his last time, also at home, where he gave up one earned over six innings -- went to the hill tonight, and for lack of a better phrase, did his job. He wasn't perfect, but her certainly was not bad. The Dodgers managed more runs than their first try against Cahill back on May 22 just three batters in: Jerry Hairston, Jr., drove a ball into the left field bleachers with a man on second, putting the Dodgers up two-nil. The score remained that way for some time, as Chad Billingsley and Cahill had a bit of a pitcher's duel going on, with each team ending their innings with as many runs as they'd started with. A few hits were scattered, but neither team managed to get a man to third until the fifth. And then, good things happened.

Miguel Montero got things going immediately with a ball he crushed off of the wall, ending up with a double. Geoff Blum then singled, while Montero put on the brakes at third. Gerardo Parra proceeded to drive a ball down the left field line, easily scoring both Blum and Montero with a double. All of this, of course, with no outs. Trevor Cahill brought the first out for the Diamondbacks in the inning, with a bouncer that moved Parra over to third; Parra then scored on a very high sacrifice fly from Stephen Drew, giving the Diamondbacks their first lead of the ballgame at 3-2.

The teams traded runs in the sixth and seventh with a sacrifice fly from Paul Goldschmidt and a home run from AJ Ellis, respectively. And that was all Cahill saw. He finished out the seventh without allowing another hit, ending his night in line for the win. All three runs he gave up were the results of home runs; past that, Cahill was fantastic. The Diamondbacks added an insurance run in the eighth on a bomb from Jason Kubel that landed about six rows back in right field, which was more than enough for JJ Putz to seal the victory.

Billingsley couldn't quite hit Trevoresque numbers, going six while surrendering four, taking the loss. Every non-pitching Diamondback managed a hit tonight (no one had two, curiously enough) except for Stephen Drew, who still accounted for one of the team's five runs batted in. Overall... today was a good day. 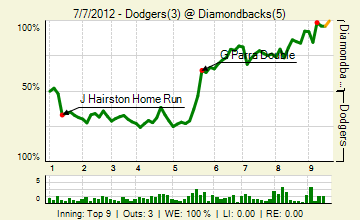 A moderately trafficked GDT tonight, as we tallied nearly 600 comments throughout the course of a game. AzDbackfanInDc led the charge with 107 commenters (the only user to hit triple-digits on the night). Clefo came in a modest and distant second with 64 comments, while blue bulldog came in third with 55. Twenty others joined the fray, with hotclaws, blank_38, Jim McLennan, Zavada's Moustache, 4 Corners Fan, jinnah, porty99, rd33, piratedan7, KDbacks, Bryan J. Boltik, DbacksSkins, xmet, Backin'the'Backs, azshadowwalker, snakecharmer, JoeCB1991, CaptainCanuck, soco, and DbackCardsFan all gracing us with their presence.

Comment of the Night goes to Clefo (shocker), who posted the following in response to Phil's claim that Williams is too conservative at third:

Barry Goldwater’s all like "Whoa dude, dial it back"

The Trevor Bauer Show resumes yet again tomorrow. Let's hope that a) we can the last three games from the Dodgers in this series heading into the All-Star break, and b) Trevor Bauer can, like, even make AZCentral chill tomorrow. Ok, so maybe that's too tall of an order. Maybe we should ask for something a little more reasonable, like a no-hitter or something. I trust Jim will post Bieber once more tomorrow - see you there, and keep in mind it's a 1:10 start time.