The Diamondbacks: Scoring And Allowing Runs

Share All sharing options for: The Diamondbacks: Scoring And Allowing Runs

You may have spent your Fourth of July holiday hanging out with friends, barbecuing or possibly even contemplating the nature of America. Me, I spent a good chunk doing all those things, but also crunching offensive and pitching numbers for the Arizona Diamondbacks. This stemmed from a discussion in a thread, where it was concluded that part of the problem with the Diamondbacks this year, is that they have trouble scoring the "right" number of runs. That would be "more than the opposition". Less facetiously, when our pitching is holding things in check, it seems the offense struggles to push one or two runs across. Is that the case?

There will be charts, oh yes. And tables? Why, certainly. It's the American way!

What I did was sort this season's first 80 games by runs scored, and divide them up into ten "buckets" of eight games each. I then worked out the average runs scored and allowed for the games in each bucket. As a comparison, I did the same thing with the 2011 season - there, I used the same ten buckets, but each was of 16 games, dropping the highest- and lowest-scoring game of the season

So, to read this: in the bottom 10% of games for the offense, the Diamondbacks so far this year, scored an average of 0.50 runs and conceded 4.38. Last year, they scored 0.81 and conceded 4.19. Overall, the number of runs scored hasn't changed all that much (4.52 per game last year, 4.39 this year.) However, the distribution of them certainly has: it's now a lot more "feast or famine". In 2011, the D-backs were held to zero or one runs 14 times. They have matched that number before the half-way point of this season. Conversely, they have scored eight or more on 14 occasions in 2012, already closing in on the 19 times they managed last year.

There's two schools of thought on any correlation between RS and RA. You could think there isn't much overlap between hitters and pitchers, and so runs scored and runs allowed in a game should be independent of each other. On the other hand, you could think that when the offense is having trouble scoring, pitchers and the defense will bear down harder, aware that every run has an additional importance [and the converse, naturally, leading to more runs being allowed when your team has scored plenty on its own account]. To see which is the case, let's put those numbers above in graphical form. First, here is the above chart for last year's Diamondbacks: 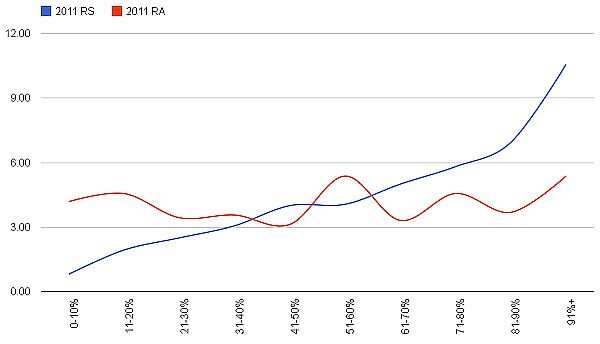 The blue line is offense, the red pitching. As you can see, the numbers of runs allowed doesn't really vary all that much from the average of 4.09 per game. It's a little higher in the middle contests, but appears to be more or less just the random variation you'd expect. Now, take a look at the same graph for this year's team: 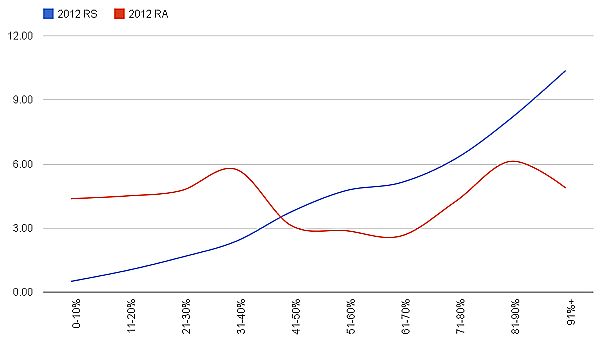 This seems a differently-shaped graph entirely. The mean allowed is somewhat higher (4.32 runs per game), but 2012 Diamondbacks allow more than usual, both when the offense is struggling and when the offense is pouring on the runs. What does this mean? To be honest, I'm not sure. A mental slackness that causes pitchers to "give up" when the offense seems to be doing so? To justify that kind of claim, you'd probably need to look at more teams to flatten out the random variations, and see if there is any kind of common pattern to be found between winning and losing franchises.

Another way to look at these numbers is to examine the team's record, again through the first 80 games, when scoring or allowing a certain number of runs. The table below does this, and for comparison, also lists the win percentages for last year's team and the NL average in 2011.

What this tells us, is that a big problem this season is losing a lot of low-scoring games. Now, obviously, you won't expect to win the majority of those, but when the Diamondbacks score three runs or less, their record this year is 3-31. That's a win percentage of just .088, compared to the National League average last season, in the same situation of .243. If we'd performed simply as expected, that would equate to an extra 5.3 low-scoring wins for Arizona. The same goes when allowing two or three runs. Last year's team were especially good, going 34-7 in such games. This year's model is 9-11, again well below the record you'd expect on average in these, of 13-7.

Something that also stands out is how good last year's Diamondbacks were at dropping the hammer on teams; as soon as that sixth run crossed the plate, it was basically game over. Arizona went 45-2 when free tacos were in play i.e. scoring more than five runs. This year, we're only half way through the campaign and we've already lost six such contests (and are 20-6 overall), after last night's 8-6 defeat to the Padres. About the only area where we're doing better than 2011, is when the D-backs score 4-5 runs, and that seems mostly to be the freakish result of having gone 11-2 when we score exactly five runs.

The "tl;dr" version? The distribution of runs may be partly responsible for the Diamondbacks being third in pitching fWAR in the NL, and the same in hitting fWAR, but only ninth in the standings. It's not so much the offense or pitching which is the problem, as the timing of the production. For example, if the distribution of the offense had been more normal - fewer zeros and ones, and fewer 8+ games - the team could well be on the other side of .500, as their Pythagorean record would have them. There's probably very little to be done about this in terms of changes; we can only hope things sort themselves out in the second half of the season.