Former Diamondbacks manager Bob Brenly once made four errors in one inning of baseball - but later in the same game, hit a walk-off homer. Hard to imagine quite how that feels. However, if anyone can empathize with Brenly, it's new Arizona third-baseman Chris Johnson. He had a brutal start: bobbling one ball, forcing Paul Goldschmidt to dig out an errant throw, clanking a bare-handed play and, to cap it all, hitting into a double-play with the bases loaded to end the third inning. Two frames later, the Dodgers walked Miguel Montero to set up a similar situation for Johnson with two outs, and the SnakePit mob were sharpening their pitchforks...

Look, I could try and extend the suspense a little bit further, but the odds are, if you are on this site, you know what happened. Perhaps you glanced at the title, or saw the box-score and noticed the four-spot for the Diamondbacks in the fifth inning. While it's possible that Johnson struck out, reached on a wild pitch, and Trevor Cahill then drove in three runs with a bases-clearing double... It's probably not all that much less likely than what actually transpired: which would be Johnson hitting a grand-slam in his first game with the Diamondbacks. For context, Craig Counsell played 664 times for Arizona, while Mark Reynolds hit 121 home-runs, and neither ever slammed. Nice work, n00b.

But I dunno. Outside of that, and Paul Goldschmidt's low-earth orbit three-run homer in the first inning, following hits by Gerardo Parra and Aaron Hill, tonight's contest didn't exactly feel like a great game for Arizona. Not that you'd really know it by looking at the score, admittedly. But there seemed to be Arizona runners stranded everywhere, sloppy defense, and bone-headed base-running. Even though Cahill had his best start since the middle of June, it didn't particularly seem that way. A WHIP of 1.50 on the night, and taking 107 pitches to get through six innings probably inform that opinion a bit.

On the other hand, only two of the 18 outs he recorded came in the air, which do suggest his sinker was working well. He even got through the first inning without allowing a run, ending a streak of seven such starts. It looked more than a bit dicey as the first two Dodgers he faced walked and singled, bringing up the toxic, smoggy heart of their order - Matt Kemp, Andre Ethier and Hanley Ramirez - with two aboard. However, Cahill struck out Kemp on three pitches, and rendered HanRam moot by getting Ethier to ground into a double-play. Amusingly, Cahill also got Ramirez to strike out with a feeble checked-swing release of the bat, which went about three feet.

Cahill ended up allowing six hits and three walks, but held the Dodgers to 0-for-8 with runners in scoring posiition, and the only damage came on an RBI ground-out to the penultimate batter he faced on the night, Hairston (no: the other one). Brad Ziegler had a perfect seventh, but Takashi Saito allowed his first run as a Diamondbacks on back-to-back hits, leading off the eighth. He rebounded to retire the next three batters, and the ninth inning was turned over to Craig Breslow, who retired the Dodgers in order to finish the game.

On offense, plenty of hits for us, particularly at the top of the order, where players #1-4 all enjoyed multi-hit games. Gerardo Parra had a three-hit night, with two apiece for Aaron Hill, Jason Kubel and Goldschmidt. However, beyond the two home-runs mentioned previously, the Diamondbacks did nothing of note with their eight other at-bats with men in scoring position. Even when they got a hit with RISP, they failed to score and made an out. In the sixth, Parra singled and stole second but tried to come home on a Hill infield single and was gunned down at the plate. Throw in an error by Miguel Montero, wonky range on the Parrazooka - and we won this? By five? Seems we did. 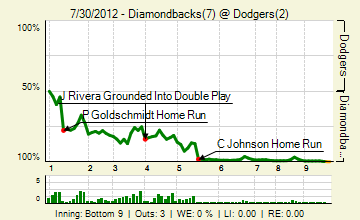 In case you were wondering, Johnson finished the game at +2.3%, his pluses and minuses more or less canceling each other out. A brisk Gameday Thread, over 1,100 comments - been a while since we've had that on a Monday, I think. imstillhungry95 took gold, with Clefo and soco filling out the podium. Also exemplifying the Olympic spirit and taking part: porty99, blank_38, Zavada's Moustache, $-The Moneyman-$, grimmy01, piratedan7, hotclaws, Rockkstarr12, onedotfive, PatrickPetersonAZ, benhat, CoachD11, Tucson d-back fan, Fangdango, txzona, BattleMoses, rd33, egboyz, CaptainCanuck, Jim McLennan, AzDbackfanInDc, Augdogs, deerhaven, 4 Corners Fan, marionette, Muu, PR151, snakecharmer, Gibbysdad, dbacksfann, Turambar, kishi, Scottyyy, Husk, since_98, Red Reign and SongBird.

Comment of the thread... Well, I did think about giving it to some of the rather pointed criticism given to our new guy in the early innings, but in the spirit of reconciliation, let's give it to porty99 for more or less calling it.

All we want is gslam please

Good results elsewhere in the standings for Arizona, as Atlanta were the only team ahead of us to win today (the Giants are still playing, tied with the Mets in the ninth). Tonight's win brings the Diamondbacks to within 3.5 of the Dodgers in the NL West - a Giants loss, hopefully, would mean they drop back to the same mark. The last time we were closer than that was all the way back on April 19... Same two teams tomorrow night, with Wade Miley and Chris Capuano facing each other in a battle of sinister starters.