Diamondbacks 2, Padres 6: Even The "Lubrador" Can't Save The D-backs

Share All sharing options for: Diamondbacks 2, Padres 6: Even The "Lubrador" Can't Save The D-backs

As in Trevor Cahill's last start, in Atlanta, he gave up an early home-run, then largely settled down for several innings, looking more like the pitcher we expected to get when we traded Jarrod Parker. However, as previously, a three-spot in the middle innings - then the fifth, this time the sixth - proved decisive. The offense were unable to deal effectively with Clayton Richard, and the result was the third loss in a row for Arizona, sinking their record back below .500. Not quite the way we wanted the home-stand to start, shall we say.

Cahill found himself bitten by the long-ball again tonight, allowing homers to a pair of Padres hitters, who came into the game with only three each. He has now allowed eight in 101.2 innings, which at 0.71 HR/9 IP is a higher rate than you might expect, but is actually lower than his numbers with Oakland (1.00). As long as they're solo shots, as they were tonight, it's probably not much of a problem. However, the sixth inning was still problematic, even after the lead-off homer. Cahill clanked a simple throw over from Aaron Hill while covering first with one down: after a strikeout by the pitcher, he couldn't get the fourth out, hitting a batter then allowing a two-RBI double.

That inning blew open what had been a one-run game, though any hope of Arizona getting back in to it would have required a good deal more effort than we saw from most of the offense in the front half. They were largely unable to solve Richard, who came within one out of throwing a complete-game on behalf of the Padres, which would have been only the second time San Diego had got one this season. The sole exception was Paul Goldschmidt, who hit the ball hard in almost all his plate appearances, and got two outs to increase his batting average for the season to .297 - hopefully, he can get it up to .300, where it hasn't been since Opening Day.

The Diamondbacks all but wasted their best opportunity to get back into the game in the bottom of the sixth. A leadoff walk to Willie Bloomquist was followed by a double off the wall from Aaron Hill, to put runners on second and third with no outs. However, three pitches later the inning was over, as Justin Upton, Goldschmidt and Miguel Montero all made first pitch outs; only Goldzilla's sacrifice fly proved productive, scoring Bloomquist. Arizona were 0-for-8 with runners in scoring position, extending their hitless streak there. It now covers three entire games, plus the last five such ABs in the Milwaukee opener, going back to Goldschmidt's third-inning homer:26 at-bats.

The Diamondbacks did get a run back in the seventh, Chris Young homering - he has three hits in his last 21 at-bats, but all three have left the yard. The previous two before that were doubles, so Young hasn't had a single since June 15. However, that run simply restored the three-run disadvantage, as the human white flag, Mike Zagurski had been called into the game, and somewhat inevitably, allowed the Padres third home-run of the night in the top half. It's only the fifth time this season that San Diego has had more than two long balls in the same game.

They scored a sixth and final run against the Arizona bullpen, with Brad Ziegler proving largely ineffective, retiring one of the five batters faced (including, as Clefo noted, four batters who saw him from the left-hand side, not quite optimum usage for our ROOGY). He gave up two walks and a hit batter as well as a single; one of the first-named came with the bases loaded, driving in a run. That got him a hook from Kirk Gibson, and Bryan Shaw cleaned up the mess nicely, with a little help from Upton. Justin delivered a strong throw on a fly-ball to right-center, nailing the runner easily at home plate.

The D-backs made it briefly interesting with two outs in the ninth, as Ryan Roberts and Gerardo Parra both singled, finally driving Richard from the game, and forcing the Padres to use at least one reliever. Indeed, Arizona came within one ball of getting the tying run to the plate, but Jason Kubel looked at strike three on a full count, and a very forgettable game for Arizona came to an end. 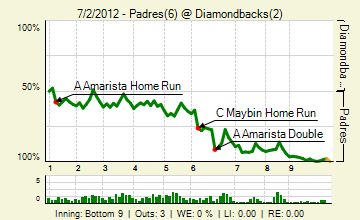 I suppose I'd better explain the headline, since it also ties in to the comment of the night. They had an extended promo for the Lucha Libre mask giveaway on Saturday night, and had the team's "luchador", complete with mask and cape, in the booth. Yet, Mark Grace spent most of the time pronouncing it as "lubrador". I'm not sure what this is. Either a new breed of dog or... Well, I'll defer to J.J.'s Soul Patch: