If we could just stop Ike Davis from hitting home runs, we'll be fine. That's what we all thought. Unfortunately, we all were wrong. As expected from a knuckleballer, 'twas a game slow and rather boring, but I suppose I can give you the details, so here goes.

Joe Saunders was on the mound and like many Diamondbacks pitchers seemed to think the approach was to let the other team score first, creating an exciting sense of uncertainty laced with despair. David Murphy singled after Ruben Tejada grounded out, then David Wright bounced one off the wall to get him home. Scott Hairston doubled and Wright scored. This was getting a little monotonous, so Ike Davis popped up, one of his few outs of the series. Saunders then walked Jason Bay, pitching a little too cautiously. Fortunately, Andres Torres popped up leaving the team two runs down after the first. Stephen Drew, Aaron Hill and Willie Bloomquist then went down meekly, never looking like scoring.

In the top of the 2nd, R.A. Dickey singled, Saunders still going with his weird plan of allowing baserunners, but luckily nothing came of it. Paul Goldschmidt, Miguel Montero and Gerardo Parra managed to load the bases with a hit, a HBP and a walk, but it was Saunders up next and he was no R.A. Dickey so it all went for nothing.

The third inning was uneventful by both sides. in the 4th, Josh Thole was hit by a pitch but it was just poor control, not retaliation. Joe had settled in now.

Or had he? Wright walked then stole 2nd (Miggy could not get off a good enough throw to prevent it), then a hit from Hairston scored Wright from second. Well, the Mets three ahead now, but that's not too much for our bats is it? Yes, it was.

(At this point, my biro ran out and all I could find was a marker pen with sparkly, green ink. This added a festive look to my notes which they did not deserve.)

In the 6th, Torres walked - "oh no not more walks" I hear you cry. Yeah, and though Thole was thwarted by Hill flipping the ball out of his glove and Dickey struck out, Tejada then got on 1st, Torres went to 3rd, and Murphy doubled him home to make it 4-0 Mets

"Where is our big inning?" I wrote in glittery capitals.

Well, it wasn't the bottom of the 6th, though Hill managed to get on base, advance to 3rd on a passed ball and Goldy, the only Diamondback with a live bat, got him across home plate. It was 4-1.

The Mets couldn't score in the 7th but in the interests of balance neither could the Snakes.

Brad Bergeson came in for Saunders and continued the plan by letting Torres get on base. Thole blooped a ball in the corner where it rattled round so Torres could score. Valdespin came in for Dickey but was ineffectual, because of a great catch by Kubel, running through a patch of sunlight in left field to make it. Tejada grounded out to Hill which got Thole to 3rd but Murphy, though he gave the ball a ride, could do no further damage. Jon Rauch came in to pitch for Dickey and efficiently mopped up Blloomquist, Hill and Kubel.

Bergeson held the fort in the ninth then Parnell, 3-8 this season, got an easy finish, though Goldy walked again, the only batter to look half alive. 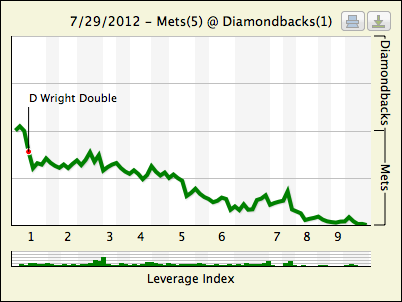 So that was it - not a very inspiring way to end the homestand, but at least the Giants also lost (swept by the Dodgers, which ties them for first).

There were no green comments though the thread was quite lively considering other options, so I've chosen this as the COTD because it summed up the game.

So, to recap that at bat