Whoa, what a wild one. A game that I actually forgot about (what happened to the 7:10 start times?) and only flipped in a little bit into the game turned into an extremely tense one, even if the score doesn't necessarily scream "intense". Ike Davis was the story of the day for New York and will likely remain the only real memory of the game for Mets fans. For us Diamondback folk, though, we'll remember it for that ninth inning, one that pitted JJ Putz against one of the best hitters in baseball, standing as the tying run. Hit the jump for what essentially amounts to a run-of-the-mill eight innings (with some history and web gemmage sprinkled in) and a heart-pounding ninth.

The game started off reasonably well, and pretty much continued on that way throughout the contest. All of the Mets blows were more or less responses to runs that we added in the previous inning, so at no point -- save for one two-out situation and the ninth inning -- did the game feel like it was going poorly. Actually, it was anything but. Ian Kennedy sailed until he was forced out in the seventh, only looking off against one Isaac Benjamin Davis.

Unfortunately, it wasn't just once. After Aaron Hill doubled home Gerardo Parra in the bottom half of the first to give the Diamondbacks an early lead, Ike Davis drilled a fastball over the plate off of the centerfield wall to knot the game at one apiece. Evil Chris Young again allowed the leadoff hitter to reach in the second inning, walking Miguel Montero, which ended up biting him when Ryan Wheeler (the good one) doubled home the runner to return the lead to the Diamondbacks. Two batters later, a Gerardo Parra single-turned-into-failed-double scored another run. He was thrown out at second, which is too bad, considering the top of the order would be up with a man in scoring position. But, back to Ike Davis.

In the fourth, Davis tacked on his second home run of the game, crushing the same pitch off of the same pitcher to same spot on the wall in center dropping the Arizona lead back to one. It was his third home run in the last two games off of the Arizona staff, and any positive feelings I had of him in the past (hey, I had a friend who liked him) have been entirely removed. Way to go, Ike. Who's the sad one now? The Diamondbacks added three more in the bottom half (hey, another leadoff batter getting on base) on a Montero homer and Parra single, and at that point, the game shifted towards the comfortable zone. Except for the fifth inning, where Ryan Wheeler saved at least a run on a flashy catch to end the inning with two Mets on base and Ike Davis on-deck. Yikes.

Fast-forward to the ninth (you didn't miss a ton, promise), where JJ Putz is trying to shut down the Mets and give the Diamondbacks consecutive victories against the club. The leadoff batter flies out. Good start. Andres Torres strikes out. Almost good start, except he reaches when Miguel Montero fails to nab the ball. Ruben Tejada singles, two on. Scott Hairston's up, but strikes out on a probably-ball-four. This brings up David Wright with two on, down by three, and Ike Davis on-deck once more. Ball. Called strike. Ball. Foul. Then, Wright swung through a splitter for strike three. We win 6-3, go us.

Kennedy pitched very well save for the three home runs, exiting with a line of 6.1IP, 7H, 3ER, 1BB, and 9K's. It was also the first time an NL hitter lost after hitting three home runs since Chris Young back in 2009 against the Rockies (thanks to Jim for that). You guys probably remember that game as my first recap. Probably. 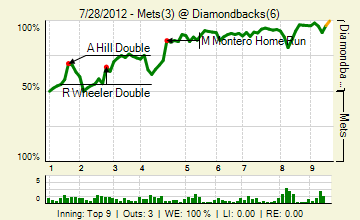 Don't look now, guys, but we're only four and a half back, with San Francisco dropping their contest today against Los Angeles. Just saying. Tomorrow we look to take the series at 1:10MT. We get to face RA Dickey. Hurray. S'ok, though, 'cause we've got the Joe Saunders on the hill for us. Be there (or here), yo.