Generation K: Why Strikeouts Are Increasing

Share All sharing options for: Generation K: Why Strikeouts Are Increasing

On Thursday night against the Mets, the Diamondbacks struck out a total of 16 times. That tied a season high, and Arizona had also fanned 15 or more times in a regulation game on June 30th (against Mike Fiers and the Brewers) and April 28th (facing the Marlins and Anibal Sanchez - imagine our hitters are glad he has gone to the American League!). So it was the third time we'd had 15+ K's, in less than a hundred contests this year. I was surprised to discover it had only happened twice over the 1,178 non-extra inning games played during the first nine seasons of the franchise's existence. And this isn't a particularly K-prone team, only 6th in the league for K's.

But it's not just the Diamondbacks. Through Thursday, there have been 31 such games in the majors this year - with more than one-third of the season still left, that's already the most in recorded baseball history, our contest pushing past the previous record, set in 1997. 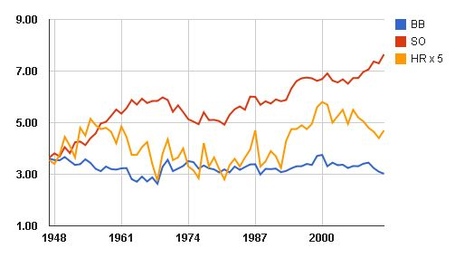 The graph above shows the number of strikeouts, walks and home-runs per game in the National League since the start of the integration era in 1947 [Home-runs are x 5, in order to make the variations more easily visible on the same scale] I restricted numbers to the National League, because it didn't go through the addition of the DH in the seventies like certain leagues I could mention. And I started the numbers in 1947, in part because it marked the start of integrated baseball, but it also began the modern era of slugging: the previous year was the last time there was less than 0.50 home-runs per team game.

The trends are obvious. Or lack of trends, in the case of walks, which have remained relatively constant, sticking between 3.00 and 3.75 since the lowering of the mound in the late sixties. Home-runs show a great deal more variation. While their lowest point was similarly in the original Year of the Pitcher (1968), they exploded in the eighties and nineties, more doubling from 1981 (0.56) through 2000 (1.16), before dropping back to around 0.9. I strongly suspect the decline is for reasons which need little explanation, but there's likely a correlation with the "number of times asked to pee into a cup" stat.

Strikeouts, however... They increased more or less steadily for the first couple of decades after the war, peaking at fractionally below six in 1969. Interestingly, the lowering of the mound from 15 to 10 inches which took place prior to that season, did not have an immediate impact on strikeouts: they increased from 5.84 to a then all-time record of 5.98. However, over the following years, K's did decline, reaching as low as 4.92 in 1981, a level not seen since the mid-fifties. But they rebounded quickly from there, cracking six per game for the first time only five season later, and have been permanently at or above that number since 1994.

Recently, the pace of the increase seems to have been accelerating. Strikeout rate sat between 6.5 and 7.0 from 1995-2008, breaking the previously unseen seven barrier in 2009, and continuing to rise from there. This season, through Thursday night's whiff-fest at Chase Field, the average team was striking out 7.65 times per game. But note how little impact the rising tide of whiffs has had on offense - which could support the theory that they're no "worse" than outs generally. The increase appears to have been fueled by taking away from the number of ground-ball and fly-ball outs, not hits. If we go back to 1947, the average line there was .265/.338/.390, for an OPS of .729. This year, the numbers are .253/.318/.401, an OPS only 10 points lower, even as strikeouts have more than doubled.

What are the reasons for the increase? Unlike home-run tendencies, there's no obvious explanation. Part of it may be tied to expansion, with a lot more hitters now needed, diluting the talent pool. While the same could be argued has happened to pitchers, that has partly been countered by the increasing rise of bullpen arms, with managers more inclined to leverage a platoon advantage. Additionally, relievers tend to strikeout more batters than starters (this year in the NL, their rate is 8.5 per nine, compared to 7.3 for the rotation), so more innings for them will lead to more strikeouts overall. However, Bill James likely nails it on the head (as quoted by Tangotiger):

One part of the equation is certainly that pitchers are throwing harder than they've ever done. Among qualifying starters this year, the median fastball velocity (half below, half above) is 91.2 mph, thrown by the likes of Gavin Floyd. A decade ago, the first season for which we have meaningful numbers, the median was Miguel Batista, at 90.1 mph, with less than 30% reaching Floyd's speed. The increase over the same time-frame is even more stark when you look at relievers. In 2002, the median reliever was Rick White at 90.3 mph; now, it's 92.5 mph, for example Francisco Cordero.

You can seem a similar kind of pattern on the Diamondbacks roster. In 2002, among pitchers with 40+ IP, Curt Schilling and Randy Johnson were the only ones to throw harder than Batista's 90.1 mph. This year, that list would include Wade Miley, Craig Breslow, Daniel Hudson and David Hernandez - the last named has an average fastball of 94.7 mph, and it's no surprise he leads the team in K-rate as well. Now, there's a good deal more to pitching effectively in the majors than just velocity, certainly. But if you make a mistake in location, you've got a better chance of getting away with it at 96 mph than 88.

For the reasons noted above, it's a trend which seems likely to continue for the foreseeable future, and one wonders if this will result in any changes to the rules down the road to redress the fine balance between pitchers and hitters. While runs scored per game are up on the previous season, for the first time since 2006. hits per game are currently at their lowest level for twenty years. While we can certainly appreciate the beauty of a pitchers' duel, offense is likely more popular among casual viewers.

One of the long-term effects of this might be to decrease the importance of defense, because fewer balls are being put into play. Writing before this season, Christina Kahrl showed that the percentages of balls in play has dropped from 73% in 1992 to 69% last year, and concluded "The recent success of bad defensive teams with deep pens and strong lineups might provide a template that keeps us exactly where we are for years to come." It's interesting to view the signing of Jason Kubel in this light, though given the Diamondbacks' middle-of-the-league position in pitching strikeouts, it doesn't seem an entirely formed philosophy.