General rule of thumb:
Runs Batted In By Starting Pitcher > Runs Allowed by Starting Pitcher = WINZ!
So it proved tonight for the Diamondbacks, as Ian Kennedy not only got the victory for pitching eight innings of two-run ball, he also broke the game open with a three-run triple in the fourth - his first three-bagger as a professional. The win was the Diamondbacks fourth in a row, and got the team back up to .500 for the first time since the opening day of July.

The first inning was disturbingly quiet, with Jonathan Sanchez looking better than his record indicated, disposing of the D-backs on nine pitches, with the aid of a double-play off the bat off Aaron Hill. However, Paul Goldschmidt continued his barrage of domination on left-handed pitchers, burying his 13th home-run of the season a good way into the bleachers in left-center. He's now hitting .396 off southpaws (38-for-96) with eight home-runs. Kubel may have been getting all the headlines of late, but Goldzilla has been getting his numbers up there. His OPS+ coming in to tonight was 133, trailing only Tony Clark's 2005 among franchise first-basemen with 300 or more PAs.

He was also an instrumental part in a very interesting fourth, leading off with a walk. Justin Upton followed with the same, then Miguel Montero cranked a double off the right-field wall. However, Goldschmidt thought the ball would be caught, and tagged up to advance. Unfortunately, Upton was operating under no such misconception and was between second and third before he realized third base was full of Goldzilla. Miggy, similarly, was round first, and he was the one who made the out. With men on second and third and one down, Chris Young popped up (shocking, I know) and it looked like the chance would go begging, as Colorado walked Ryan Roberts to get to Kennedy.

With three walks already in the inning, and Sanchez known for wildness, the perceived wisdom i.e. Mark Grace was that Kennedy should wait it out until Sanchez has thrown two strikes. Kennedy, however, was having none of it, and put a very pretty pass on a 1-1 fastball and drove it to the corner in left-center where even the speedy Dexter Fowler couldn't reach it. The bases were emptied and we had a four-run lead, on only the second bases-loaded triple by a pitcher in over seven years [Anthony Bass had one off Josh Johnson in May. As soco noted in the GDT, the Padres still lost]. Willie Bloomquist followed up with his second hit of the night to make it 5-0 to the Diamondbacks.

Kennedy, meanwhile, was mostly cruising on the mound, though he did allow a solo home-run in the fifth, and an RBI single to the penultimate batter he faced, in the eighth. He threw first pitch strikes to every batter faced through two outs in the fourth inning, and 22 of 29 overall. Over his eight innings, he had no walks and seven strikeouts, the same as he had in his previous outing, against the Reds, allowing only five hits here. Good to see his numbers going in the right direction: if the Diamondbacks are going to make any kind of push in the second-half, he's going to be a big part of it.

Of course, no D-backs win would be complete without a little drama, and Ryan Roberts' sacrifice fly not only delivered free tacos for the sixth consecutive game, they also provided a bit more breathing room for Arizona. That was welcome, as Mike Zagurski came in and allowed a homer, then a walk, putting the tying run in the on-deck circle. J.J. Putz, who had already been warmed up to come in for the save before RyRo's RBI, came in and ensured that hypothetical run stayed right there, retiring the next three Rockies on 12 pitches, with a dozen pitches and two strikeouts. It was only his fifth save opportunity in 36 games since June 10.

The six runs scored tonight gives the Diamondbacks 52 over the past half-dozen contests. That's the most in over a decade, since the team pushed 53 across from September 21-27 in the 2001 season. The all-time record for the team is an impressive 60, in the 1999 season,.which included a trio of 8 run games, a 10, an 11 and a 15. Standing wise, it didn't do much for us in the NL West, as the Dodgers and Giants both won. However, all the wild-card teams outside the West were beaten. The two spots would currently go to Pittsburgh and Los Angeles: we're 4.5 games back of the latter. Just keep winning... 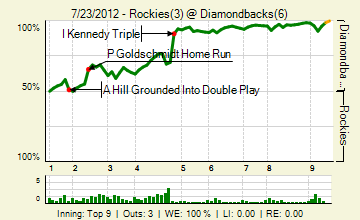 Honorary mentions go to the green comments posted by hotclaws and $-The Moneyman-$, but they are disqualified from consideration due to shameless pandering of cute and self-promotion (ok: more 'Pit promotion, really). Instead we got for the double bill of Clefo and ZM, who responded to the question of whether there was a better non-Votto first-baseman in the NL then Goldschmidt, with:

and I say Bryan LaHair, I DON’T CARE IF HE HASN’T BEEN PLAYING FIRST SINCE RIZZO THE RAT CAME UP, WHY AM I ASLEEP AT THIS TRAFFIC LIGHT?

Congrats on getting through that monologue

We'll be back for the same teams tomorrow, and we'll be at the park for this one, so are hoping for good things. And by "good things," I mean another win.