Share All sharing options for: Diamondbacks 12, Astros 3: For It's One, Two, Three...

Record: 46-48. Pace: 79-83. Change on last year: -4.
... home runs, we win, at the old ballgame.
So, we avoided a sweep yesterday against a terrible team. That's progress. Today (or, rather, tonight), we went to see if we could clinch a series against an awful team. Now, that wouldn't just be progress, but more of a monumental leap. But how could we follow up yesterday's game, a game in which the Astros were "clapt up", to quote the great philosopher soco, a game in which we piled on 13 runs en route to a five-run victory over Houston?
Why, the answer to that question is pretty simple. We'd go out, Jason Kubel would smash three home runs (two and a half in Schulte's book), Wade Miley would dominate, and we'd set ourselves up to sweep the Astros tomorrow afternoon. Just like that. Hit the jump for the deets, yo.

The first inning was somewhat of a microcosm of the entire game. Wade Miley very quickly set the top of the Astros order down 1-2-3; in the bottom half, Jason Kubel hit a home run. See? Microcosm. Admittedly, the game wasn't really blown open until the fourth. Houston actually managed to cut the the lead to one (the closest the game was all night) on a Chris Johnson double in the top half of the inning, yet it seemed that it served to do little past angering Jason Kubel.

After the first three batters of the inning got on base (double, walk, error) for the Diamondbacks, Willie Bloomquist got things rolling with a sac fly to right. With runners at the corners, Aaron Hill singled, bringing the score to 4-1 in favor of the good guys. Then, Jason Kubel happened again, as he drove a ball to right scoring both Miley and Hill and bringing the score to 7-1. The game started feeling good at that point, and to be honest, it was pretty much over at that point. However, I'd be remiss as a recapper to end one like that, so I'll carry on, just for you.

Bloomquist added two more ribbies to his season total in the fifth, scoring both Chris Young and Ryan Roberts and bumping the score up to 9-1. Jason Kubel homered yet again in the sixth, his third of the night, and rose his season RBI total to a very nice 70, standing gloriously atop the National League leaderboard. It's the first three run home run game of his eight-year career, and it came in Sedona Red. Woot.

Miley allowed just a single run all night (with the other two Houston runs coming off of the bullpen), ending his night with a line of 7IP, 4H, 1ER, 2BB, and a career-high nine strikeouts. His ERA is now just a hair over three at 3.02. He looked good throughout the night -- yes, it was against Houston, but whatever -- and his awesome rookie campaign continues to impress.

I, however, continue oscillating between believing and wanting to sell at the deadline. After the last two games, it seems like we're a good team that just needs to hit its stride to take the division, as opposed to the Reds game, a game where I just felt bad. The Dodgers won over the Mets today and the Giants beat the Phillies in extras, so we gain no ground in the divisional standings. The optimist (something that I think I am after today) says that we didn't lose any ground today. There's no denying, however, that we're going to need a little bit of help from the two teams on top of us if we want to still pull this thing out (so long as you're still believing).

But for now, I'll just enjoy this victory. Today, my Snakepit brethren, was a good day. A fine day indeed. 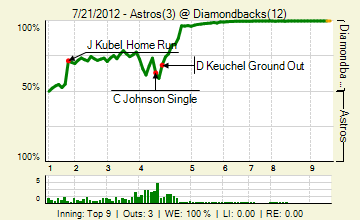 Comment of the Night goes to The-Moneyman. No context needed, except that it was posted before the game.

Let’s see how the D-Backs Do Dallas.

So tomorrow we go for the sweep. Let's do eet.