In the middle of the sixth inning, Arizona were six runs up, Joe Saunders had a one-hitter going, and we looked very likely to take three out of four on the road against the NL Central leaders. Didn't quite turn out that way. Saunders allowed a three-run homer, then Bryan Shaw melted down, throwing eight straight balls to bring the tying run to the plate. That, and more, scored as he was inexplicably left in, and the Reds plated seven runs over two innings, to get a split of the four-game set. I'd have settled for that going in, but the defeat feels a lot worse.

soco will be along with a full recap later: this is just a place-holder, in which we can sulk and stew for the next few hours.

Thanks, ghost soco, I'll take it from here!

I want to blame the 9:35am start. Even accounting for Eastern Daylight Time, the time zone of heathens, that's still too early. Of course, the problem with this theory is that the Diamondbacks, who should have been the team uncomfortable with such an early start, dominated the first half of the game.

Willie Bloomquist started things off right away, leading the game off with a single. After somehow not becoming a TOOTBLAN, Bloomquist would come around to score after stealing second, and being brought home on a Paul Goldschmidt single.

Bloomquist got the offense started again in the 3rd with a leadoff double. An Aaron Hill single later, and the Diamondbacks had staked out an early 2-0 lead, and didn't look to be slowing down. Hill added another run with a solo home run in the 5th.

The Diamondbacks really broke open the game in 6th. Justin Upton, the Lazy One, led the inning off with a double, and Chris Young matched his double with one of his own to put the score at 4-0. Henry Blanco realized he hadn't done anything in awhile, so he hit a two run homer to put up a taco score, and Mike Leake, the Cincinnati starter and former Arizona State University star, was out of the game.

The Reds finally got on the board in the 6th with aforementioned 3 run shot by Brandon Phillips. And then, the 7th inning. Look, you probably haven't even read this far, if anything at all, so I'm not going to torture myself by reliving it. Bryan Shaw, bad dog, no treats, et cetera.

It's a shame that the team wasted such a good start by Saunders. Sure, he let up the 3 run homer, but I'll take 3 runs from my starter most days, especially on days where the team has already scored 6 runs. More than 6 innings pitched would be nice, but 5 strikeouts and only 4 hits is more than acceptable. But that's a .500 team for you. 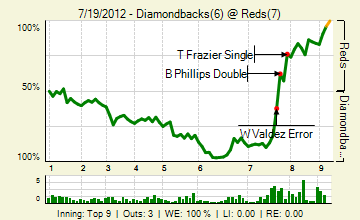 Founder of the 'Foundation for the Advancement of Clefoing' a 501C3. Owes Ian Kennedy a T-Shirt.

Tomorrow the D-backs limp home to take on the hapless Astros. Of course, we said the same thing about the Cubs and look how that turned out. One of the games, I believe, is Justin Upton Bobblehead night, so don't be lazy and head out to the game to snag one yourself. First pitch tomorrow is the usual time, 6:40pm Arizona time, so be here or somewhere else.