(NOTE: As with the first one, there are many images in this story that I took. Prepare accordingly.)

In the second (and probably final for this season, to be honest) installment of "me going to Reno Aces at Tucson Padres games to watch highly touted pitching prospects and then take pictures and write about them" (probably should come up with a catchier title sometime.), I went tonight to see Tyler Skaggs test his mettle against the Padres. As you may recall, Skaggs was the PTBN that kept a good many people from jumping off various cliffs and tall buildings in the Dan Haren trade back in 2010.
Like Trevor Bauer before him, Skaggs started the season in AA Mobile, and then was promptly called up to Reno. Before tonight he was the holder of an impressive-for-Reno 2.65 ERA in his time in AAA. Would he feast on the Tucson Padres, or would they feast on him?

It's the second one, unfortunately. The Aces were lackluster on offense, and made a few costly defensive mistakes. I wasn't really that surprised, they are a D'Backs farm team, after all. Follow after the jump for more deets, as the kids say. 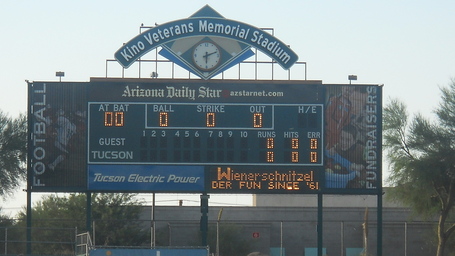 I went with my mom, who was passing through town, and we were able to get pretty good box seats right next to the visiting team dugout. While this made for good viewing during the game, it made pre-game a bit awkward with the hordes of autograph seekers around and being the only people in the section who actually were sitting there for the game and not going after autographs. I thought it was cool enough to be close enough to be able to touch a good number of Reno players who came by. (But I didn't, I respect people's personal space, plus I had this weird paranoid feeling that Josh Bell would beat me up as a surrogate for the things written on this website about his play.)

It was also dollar hot dog night. I took advantage of this twice.


The Aces staked a 1-0 lead on a Josh Bell RBI double in the top of the 1st, but that was the height of their offense, unfortunately. The second batter Skaggs faced, Andy Parrino, lined a hard ball right into Skaggs' leg. The trainer came out, but Tyler stayed in the game. It's hard to say whether that affected the rest of his night, but it wasn't a great night for him.

It seemed to start out okay. His stuff, from my untrained eye, looked pretty good, but he only recorded one strikeout all night. This is a weird thing, but the sound that the catcher's mit made when a pitch from Skaggs hit it was distinctly different from every other pitcher that night. That probably means nothing, but it's something that I noticed.

There was a chance for a clean inning, as Skaggs had Parrino picked off later in the inning. All Mike Jacobs at First Base had to do was make a clean throw to second to get the runner out, and Jacobs did throw the ball in the general vicinity of Adam Eaton. Thing is, Adam Eaton plays Center Field, and Parrino was safe. This would become very important, as Skaggs would walk the bases loaded. I wasn't at the best angle to say one way or the other, but Keith Law, who was also in attendance, seemed to think he got squeezed:

Skaggs 90-94 in the first. Broke two bats, took a liner off his leg, got squeezed by the HP ump on the second of his two walks.

The admittedly awesomely-named Beamer Weems made those walks and that error pay with a bases clearing double to make it 3-1 in favor of Tucson. 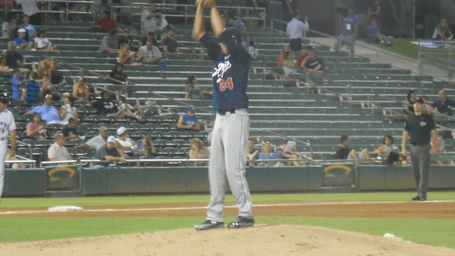 Three runs just like that, and all unearned. Skaggs would give up an earned run in the 3rd, giving up a solo shot to Matt Clark. He would only last five innings. His final line was: 5.0 IP, 1 ER, 1 K, 3 BB. Not exactly what you would want to see from him, but it's only one start. It's hard to tell if the ball off the leg adversely affected him in any way (since it happened on the second batter of the game.), but for whatever reason, Skaggs was not sharp tonight. Of course, I'm not going to sit here and declare that his prospect status and major league dreams are doomed after one mediocre start. We'll see how he does in his next few outings. It would be nice to see more K's and less walks. (ACHIEVEMENT UNLOCKED: GENERIC ADVICE THAT APPLIES TO ANY PITCHER!)
The Padres added another run on the triple/sac fly combo off of Mike DeMark, and the score held 5-1. The Aces had a few opportunities with runners in scoring position, but failed to capitalize. The Aces are still up 2-1 in the current four game series, and can go for the win tomorrow night.
Some other takeaways: 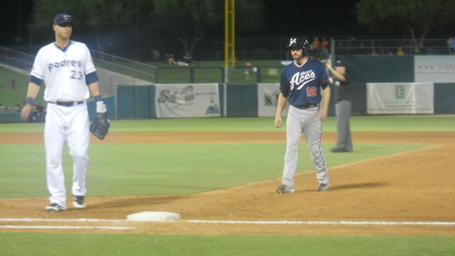 As I mentioned, one night is not sufficient enough to really gauge anything about any baseball player, from established big league superstar to fringe prospect. We'll have to see the development of Tyler Skaggs in Reno before making any sort of judgement, and even then that judgement will probably be wrong in some way. Based on his hype and previous efforts, I could conceivably see him up in September in the event the D'Backs fall out of contention, and there's also a good chance you see him on the opening day roster in 2013, unless you don't. I could be wrong.