The Dbacks got a big win in Cincinnati last night. Can we keep the momentum, or will we falter? Find out after the jump. Or just read the box-score...

This starts out rather uneventfully as the Dbacks go down 1-2-3 in the top of the first. It got sort of messy in the bottom of the first as Bauer gives up a walk to Drew Stubbs and Drew boots a groundball so both runners are safe. Brandon Phillips strikes out and Ludwick walks on a wild pitch, which scores Stubbs. Not much else happens until the bottom of the third, when Bauer gets Cueto and Stubbs to ground out, but then Cozart and Phillips walk, which brings up Ryan Ludwick and he promptly launches a 3 run home run. Scott Rolen walks, but Todd Frazier strikes out to end the inning.

The Dbacks scatter a couple hits in the 4th, 5th and 6th, but fail to score any runs. The Dbacks begin the top of the 7th with a Geoff Blum single, although Drew, Bloomquist and Hill made 3 quick outs to end the inning. The bottom is pretty quick outside of a Drew Stubbs single; after that the Reds are sat down 1-2-3. Montero leads off the eighth with a ground-out. Upton hits a single but CY and Goldy both strike out to end the top of the frame. Scott Rolen singles to open up the bottom half but the Reds fail to make any more noise as the next 3 batters are quickly sent back to the dugout. Parra leads off the last inning with a strike out. Ryan Roberts singles, and Drew strikes out. Bloomquist hits another single, but Aaron Hill strikes out on a foul tip against Aroldis Chapman to end the game. 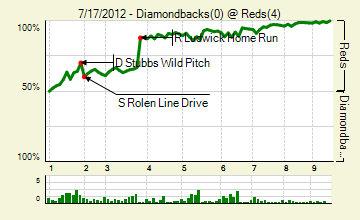 Comment of the Thread... Well, there was a tie on five recs between Clefo and Zavada's Mustache, but originality dictates that it goes to the latter, despite the former pleading. "I did a comment like this once before in 2010, and that one may have been better. But there was no COTN til later in that season and I felt robbed." DENIED! The following was after Mark Grace admitted to a...relationship with the female Reds mascot.

“Hey baby, back home I’m a mascot too. They call me Racin’ Gracie. But don’t worry, I always…finish last.”