This is 'Pit Your Wits. We're back after taking last week off. "Why did you take last week off?" you might ask. The answer to that is simple: "just because". You might also notice that this is up on Wednesday, and not the usual Thursday slot. What are the reasons for that? "Stuff" is the answer. So yeah, PYW is gonna be on Wednesdays now, so adjust everything about your life accordingly.

Last time around, we wrote haikus about the D'Backs performance in June. A good time was had by all, but there must always be a winner, just because. Follow after the jump for that sort of thing

Gold goes to kishi for this:

"Anytime you can sign an oft-injured guy to fill a hole that wasn't there YOU MAKE THAT DEAL."
-Clefo

Silver goes to Zavada's Moustache for the following:

Carly Rae Jepsen's rhythm broke down in the second line, but you get the idea.

Bronze, as if often the case, is shared this week between since_98 and jinnah. (I should also note that ZM also had a 3 rec haiku, but only one prize per entry. I think I said that before, if not it's an unwritten rule and thus is more sacred.)

Look at it this way:
at least we are not the Cubs.
That’s all I can say.

I don't let facts get in the way of my opinion.

(Boy, that is awkward in hindsight)

And here is the leaderboard:

So that means that at the All Star Break, kishi is our first half leader. Here is his prize: 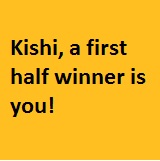 Yeah, I worked for less than a minute on that. Not bragging, just saying.

As we know, this is the time for wheeling and/or dealing in baseball. The D'Backs are in that weird purgatory zone between being buyers and sellers at the time of writing. Imagine you wake up on August 1st and look at a newspaper (this is a hypothetical alternate universe where newspapers are still things that people use for stuff). What is the most outrageous headline you can think of for the D'Backs moves at the trading deadline?

(Try to be outrageous in a kind of funny way. I mean "UPTON AND BAUER TRADED FOR JOHNATHAN SANCHEZ" might be funny, but it's depressing, mostly.)

Entries and recs will be accepted up to the end of Tuesday. Get on it, people!