Diamondbacks 5, Reds 3: AZ Makes A Right Charlie Out Of Bronson

Share All sharing options for: Diamondbacks 5, Reds 3: AZ Makes A Right Charlie Out Of Bronson

One of the things I love about baseball, is the near-infinite possibilities it presents, with a chance you'll see something unique every game. Such was the case tonight, though the score-books will simply record it as:
Chris Young intentionally walked, Miguel Montero out at home.
What? WHAT? What? Yeah, Miguel Montero had an...interesting game, driving in four RBI for the D-backs, making a couple of alert plays at home, but also... Well, we'll get to that later. In the bigger picture, what matters is that Arizona won their first game in the second half. Getting five consecutive hits to win the game probably helped.

The offense, all but invisible in Chicago, showed up with a vengeance in Cincinnati - the D-backs surpassed their entire tally of runs against the Cubs, before a single batter was retired. Hits by Stephen Drew, Willie Bloomquist and new #3 hitter Aaron Hill loaded the bases for Miguel Montero, who promptly emptied them with a double to the left-center gap. new #5 hitter Justin Upton made it 4-0 with an RBI single of his own, though the chance to do more damage was lost, after Lyle Overbay blistered the ball straight into the first-baseman's glove for a lined double-play. Still, it was the best opening frame for us since we put a four-spot up against the Phillies on April 23.

However, if Reds starter Bronson Arroyo struggled - the first 11 Diamondbacks to come up went 7-for-10 with a walk - Wade Miley had almost equal issues of his own early. Cincinnati scored a run in the first, and added a couple more runs in the second, all the damage coming with two outs, as their first 10 batters went 6-for-9 with a sacrifice. The D-backs wasted a chance in their half of the second, as Wade Miley popped up a bunt when Gerardo Parra had basically stolen second. If he'd pulled the bat back, it would have been a man on second with no outs; instead, it was bases empty, with two outs, thanks to our second non-standard double-play.

Fortunately, Montero restored a bit of breathing room with his ninth home-run of the season. And Miley suddenly found the "on" switch to retire batters, which he seemed to have mis-placed over the last couple of starts. He went back to busting right-handers with fastballs inside, then finishing them off with hard sliders down and in. Wade retired eleven Reds batters in a row, five of them on swinging strikeouts. The D-backs continued to pile up hits, with 11, plus two walks, through five innings, and also had a few balls smashed right at the home defense. I wondered if the runners left on base were going to come back to haunt us.

The sixth inning saw the end of Miley. He had only thrown 97 pitches, but Wade left with two runners aboard and two outs - Kirk Gibson brought in Brad Ziegler to get the third out, probably because the tying run was on base. Miley seemed none too happy with the decision, yelling to his glove as he headed towards the dugout, but Ziegler proved up to the task [he had held right-handed batters to a .574 OPS coming in to the game]. Miley's final line was 5.2 IP, 8 H, 3 R, 3 ER, 0 BB, 6 K: probably his best outing since his last W on June 24. Could the bullpen and offense keep him the pitcher of record and get him to ten victories?

The seventh inning was...interesting. The Reds' reliever walked two batters, couldn't find the strike zone with the aid of Google Maps, but got Lyle Overbay to hit into a double-play. Chris Young was up, with Miguel Montero on third: one wild pitch caromed right off the back-stop to the catcher, and Miggy had to hold. On a 3-0 count, the catcher called for an intentional walk to Young, but the pitcher spiked another ball to the backstop. Montero came, stopped, started again, and another fortunate ricochet off the stonework allowed the catcher to flip the ball to a (somewhat surprised) pitcher covering home, who applied the tag. "C Young intentionally walked, M Montero out at home."

The bottom half had its moments too, as Miguel Cairo fouled a pitch off, which was pounced on by Montero, who tagged the batter, and Cairo was called out by home-plate umpire Dan Bellino [who also had one of the most generous strike-zones I've ever seen, though he was consistent, at least]. Cairo was furious, bumping the ump, which will likely lead to sanctions there. Replays suggested the ball might just have spun back onto the very back edge of home-plate, though Bellino may also have been screened. Safe to say, he certainly won't be one of The Friends of Mr. Cairo.

The Arizona bullpen was solid, with Ziegler, David Hernandez and J.J. Putz allowing a single and a walk over 3.1 scoreless innings. Putz allowed the hit with one out in the ninth, to bring the tying run to the plate, but got the next two batters to strikeout, picking up only his fourth save since June 10. Lots of hitting to go around as well: Bloomquist, Montero and Upton each had three-hit games, and Lyle Overbay - hitless since June 19 - was the only player without a hit, going 0-for-5 with a GIDP. Generally, you'd expect to score more than five on 13 hits and six walks, but tonight it was enough. Arizona are now 14-2 when scoring exactly five runs this year. 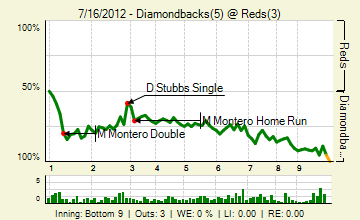 Comment of the night goes to ZM, narrowly edging out piratedan

I haven't seen Cairo this angry,

Since Mubarak was still in power.

We'll see you tomorrow for the same two teams, with Trevor Bauer taking on Johnny Cueto: I am expecting the Total Recall references to fly...