Diamondbacks 1, Cubs 3: ...And A Slice Of Deep Despair Pizza

Share All sharing options for: Diamondbacks 1, Cubs 3: ...And A Slice Of Deep Despair Pizza

"We're not looking for prospects. We're still in win mode. We're certainly not in sell mode at all."
-- Kevin Towers, July 10

I wonder if he still feels that way after a dismal sweep at the hands of the Cubs? The Diamondbacks scored a total of three runs: only the second time since June 2004 the team has been held to one run or less in three consecutive games, and the first since 2003 it has happened against a single opponent. At the time of writing, we're six games back in the West, and further than that in the National League wild-card. With our next four games on the road, against the team with the second-best record in the league, it's a distinct possibility Arizona could basically be out of contention by Thursday lunchtime, unless the team starts playing an awful lot better.

Cahill struggled out of the starting-blocks, as has been his modus operandi this season, having problems getting his sinker down in the zone. That not only led to a lot of work for our starter - he had four full counts to the first six batters faced, and threw a total of 38 pitches to them. - but his lack of control was largely responsible for putting the Diamondbacks behind early. He walked the lead-off man for the Cubs, which hurt immediately, as he came around to score when a wild-pitch was followed immediately by a single. That increased Cahill's first-inning ERA to 7.00, having now allowed 14 earned runs in 18 starts.

The problem continued in the second, again starting with a lead-off walk. This one came around to score as well, but the mechanism was slightly different, as a two-run homer allowed the Cubs to extend their lead to 3-0. That's perhaps also a result of Cahill's wildness, leaving pitches up, and seems to be a recent development. In his first 13 starts, covering 84.2 innings, he allowed only three home-runs. Over the last five, and 29.1 innings, eight pitches have left the park. Of the 11 long-balls in total given up by Cahill, four have been in the first frame.

The Diamondbacks did make Garza work in the third, forcing him to throw 29 pitches, and bringing Justin Upton to the plate as the tying run. However, he swung and missed at ball four. The process was largely repeated in the fourth, after hits by Miguel Montero and Chris Young brought Gerardo Parra to the plate as the tying run. However, he also swung and missed at a pitch out of the strike-zone. Cahill enjoyed his first ever multi-hit game, singling in the third and fitth, but his efforts in the latter were erased as Aaron Hill grounded into an inning-ending double-play. Hey, at least that spared us the whole "futility with runners in scoring position" thing.

From the fifth to the eighth innings inclusive, we sent one batter over the minimum to the mound. That was Hill, who circled the bases on his 12th home-run of the season, cutting the Cubs lead to two. The D-backs did make things interesting by putting the tying run on base with one out in the ninth. However, Geoff Blum went down, swinging - stop me if you've heard this before - at a ball well out of the zone, and Parra lined a rocket off Carlos Marmol, which the Cubs closer retrieved and threw to first for the final out. No luck but bad luck for us, but when the heart of your order, the 3-4-5 hitters in Upton, Stephen Drew and Montero, combine to go 0-for-11...

After his shaky start, Cahill settled down, but all that early work, on a humid Chicago day, with the temperature in the mid-80's, caught up with him, and he was pulled after putting two on with one out in the sixth. Craig Breslow, Bryan Shaw and J.J. Putz were perfect, retiring all eight batters faced, and the D-backs outhit the Cubs by a margin of 7-4. Likely the key difference in this contest were the two leadoff walks issued by Cahill, both of which came around to score for Chicago. Meanwhile, Arizona were held hitless with runners in scoring position this afternoon, and went 1-for-16 over the series. 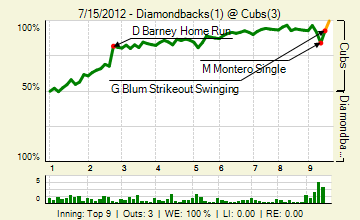 Not often the same guy is both hero and villain for the day. A light Gameday Thread - early deficits will tend to do that, especially when they seem as insurmountable as this one. Just over 400 comments, with AzDbackfanInDc leading the way, over Clefo and onedotfive. Also to be found there: soco, Tucson d-back fan, JoeCB1991, Stupendous Man, hotclaws, blue bulldog, 4 Corners Fan, txzona, snakecharmer, Jim McLennan, Backin'the'Backs, Gibbysdad, blank_38, rd33, Turambar, dbacks79, Augdogs and Jdub220. Nothing got more than one rec, and to be honest, nothing stood out as Comment of the Thread.

It's on to Cincinnati and the Reds for the next four games. Tomorrow's is a 4:10pm start, Arizona time, with Wade Miley scheduled to go up against Bronson Arroyo, so we'll see you for that.