Share All sharing options for: Diamondbacks 1, Cubs 4: 9 Innings of Pain

This game was, in many ways, a perfect set-up for me. This being summer break, my circadian rhythm was thrown out of the window long ago, and I'm currently at a point where I wake up at around 4:30 in the morning and go to sleep some time around 6:00 in the evening. With today's game starting at 10:00 in the morning instead of the usual six or seven that I've grown accustomed to, it seemed as if the universe was bending to my will. We played the Cubs, too, one of the three teams I can watch locally on television, further cementing the idea that everything was simply set to go my way.

Well, then we went out and faced Ryan Dempster, who ran his scoreless inning streak to 33 and guaranteeing the Cubs a series win over the Diamondbacks to open up the second half of the season. I guess almost everything was set to go my way. Hit the jump for the details.

Joe Saunders made his return from the disabled list today, and his performance today... well, it was more ore less unremarkable. He managed to go six innings, giving up four runs along the way (three earned), striking out four while walking none. I would really like to blame Joe for today's dismal showing, but a) the times of him acting as the scapegoat are behind us, I believe, and b) it wasn't his fault that the offense proved completely inept.

There wasn't even a "breakout inning" or anything from Chicago that did us in. Starlin Castro beat out a throw in the third to scratch the first run of the game across home plate, and three hits in the fourth scored the next and last two earned runs against Saunders. This was one of those games where you don't really have a massive punch to the gut, curse a little bit, and change the channel; it was just sorta... hard to watch throughout.

We managed a grand total of two extra-base hits over today's nine innings. Two. A nice double down the left-field line by Paul Goldschmidt in the top of the fourth, the only XBH off of Dempster, and a seventh-inning home run from Chris Young, the latter of which served only to make us believe that we may have had a chance. And now I may have to endure my dad, a diehard Cubs fan (whom I live with), after a sweep. Please, let's not let that happen.

If you're someone that likes to find one person to blame for a loss, then this is not the game for you to analyze. Goldy was the only one with more than one hit, and one of only three Diamondbacks who reached base more than once (Upton walked twice, as did CY). It was just a very poor showing for the entire offense, and Saunders wasn't as perfect as he would have had to have been if the Diamondbacks were to win the game. Dempster and his now-1.86 ERA were more or less unsolvable today. Let's just hope Garza isn't the same tomorrow. 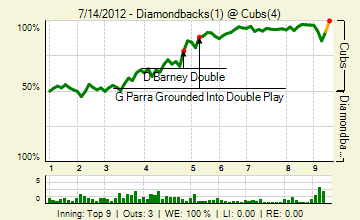 Comment of the Day goes to piratedan7. Unfortunately, it doesn't need any context:

Tomorrow, we do battle once more and try to avoid getting swept by what is unarguably one of the worst teams in baseball. We put our hopes in the arm of Trevor Cahill, who will face Matt Garza at 11:20 MT. Fingers crossed.