Share All sharing options for: Diamondbacks Thing of the Week: Daron Sutton Bobblehead 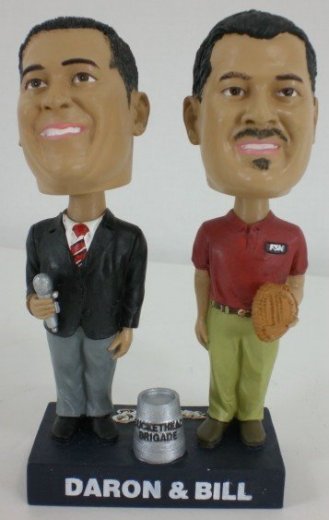 Okay, technically it's not a Diamondbacks Thing, but the continued, unexplained absence of our play-by-play guy leaves me with an urge to buy this, simply so I can put it on top of the TV in SnakePit Towers [with a sign attached, saying "Never Forget..."]. And nor is it just a Daron Sutton Bobblehead, since it also includes the likeness of Bill Schroeder, who has been the Brewers' color commentator - their Mark Grace, if you will - since 1995.

I note, in particular, that Sutton is wearing a suit, while Schroeder has on a Fox Sports polo-shirt. Hmmm...

There's not really much of a description for this item. "2004 Milwaukee Brewers Daron Sutton & Bill Schroeder Buckethead Brigade Bobblehead. Super Warehouse Find! Not sure how this was given away. This auction includes the Box too!" The box too? Be still my beating heart. And I'm also uncertain quite how true the "Super Warehouse Find!" thing is, though the auction states "65 available / 16 sold"; I'm not sure which figure is more disturbing. I suspect the seller here may have been the winner of this auction, and picked up 24 of them for less than a buck apiece. The selling price here - $15 plus $12.57 in expedited shipping - would be quite a hefty mark-up.

The Buckethead Brigade might merit a bit more explanation. It seems like it was the Milwaukee ancestor of the Redheads' Section, the short-lived attempt to create an "extreme fan" zone at Chase Field. [Likely doomed to futility, since getting the majority of Chase inhabitants to become "extreme" would probably require the ushers to be armed with cattle-prods - though it's an area which has improved over the last couple of years] Reading one fan's report of a night there, from September 2004, this sounds more than a little familiar:

The Buckethead section is in the left field corner, in the section before the bleachers. Every Tuesday night home game, The Bucketheads unite to cheer on their team. You need to purchase a ticket for the section, and then you get a t-shirt and the chance to get rowdy with Milwaukee's most extreme fans.

Also at the above link, check out the photo of Daron, wearing a shirt that would never, in a galactic epoch, be considered appropriate attire for....well, anywhere, outside a Grateful Dead concert, I think. I thought my eyes were watering after looking at that, but turned out they were actually bleeding. Apparently, the name of the section "was a play on the fact that they used to sell beer in buckets at the old County Stadium, and the drunks would wear the empty buckets on their heads." It doesn't appear the Brewers continued with it after Sutton left for Arizona, to start the 2007 season, but it certainly seems to have been well-loved.

With a simple discussion about the size of guys "melons," including their own, the men behind the mic created a monster. It was an outlet of Daron's passion -- a representation of who he is. If he wasn't "tied up" in one of his bright colored shirt and necktie combos, Daron would have been right there with everyone else in Section 232. The Bucketheads stuffed it full of fun and it became a coveted ticket. During the game, the group poked fun at itself, got rowdy, and had a blast. But the Bucketheads also paid closer attention than any other fan that night in Miller Park.

For now, the strange silence around Sutton and the Diamondbacks continues to roll on - much to the thinly-disguised chagrin of beat reporters like Nick Piecoro. Can't blame him - hard for any journalist to be asked the same questions about a hundred times per day, and for them to be unanswerable due to the ongoing non-resolution, and reluctance of anyone to go on the record and explain what happened.

#Dbacks broadcaster Mark Grace singing Take Me Out to the Ballgame today at Wrigley. Daron Sutton was unavailable.

Maybe, this will all eventually be resolved amicably between the concerned parties, and down the line there'll be a Sutton and Grace Bobblehead, similar to this item,. given away at a future Diamondbacks game. I can only hope that's the case. Until then: Days since Daron Sutton's last appearance on TV: 24.