Share All sharing options for: Dbacks 2, Brewers 10: HELP! The Brewers are on "Fier"

Note: This recap was done in conjunction with Wailord.

Today is the day Wade Miley goes for his 10th win on the season. Will It happen? Find out after the jump!

I sure got the short end of the stick. Due to some scheduling peculiarities with the recapping, I told BattleMoses that I'd take the first half of the game before I take off to go out with friends, and he could take the latter half (as well as add the bells 'n' whistles). Surely, it would pay off; after all, The Wade Miley was starting! Regardless of what hours FedEx operates on Saturdays, it should have been the smart choice, the first half of the game. I was... well, it would be difficult to be more incorrect than I actually was. About anything.

Although both Stephen Drew and Justin Upton walked in the first, the offense couldn't do much with it. Michael Fiers worked around it all and managed to keep the Diamondbacks off the scoreboard in the first, a favor Miley returned to the Brewers in the bottom half. The second, I suppose, is where Wade's night began to unravel. The Diamondbacks again went scoreless (thanks to Chris Young being generally bad and Miley striking out whilst bunting on an 1-2 count); the same cannot be said for the Brewers. CY lost a ball in the sun, allowing Corey Hart a triple* to lead off the inning. Strike three to Rickie Weeks got away from Miguel Montero, scoring Hart, and moving Weeks to first. Thankfully, that was the end of the scoring for Milwaukee in the second

Not so bad, right? That's not too much of an unraveling, just a few misplays. How about Ryan Braun's home run in the third, which brought the score to 2-0? No? Fine, then, I'll bring out the big guns: the fourth inning. Single, single, three-run home run (thanks, Cody Ransom), single, sacrifice bunt, flyout, RBI triple, two-run home run (Ryan Braun's second of the night), end Wade Miley's night. Although I couldn't watch the game, the GDT seemed to think that Miley's stuff looked flat and uninspiring tonight, a sentiment echoed in the box score. Brad Ziegler came in to get the last out, but the score was 9-0 and the game was largely out of hand. I'll slide the rest of the recap over to BattleMoses, but I fear he won't have much to recap past this.

Alright, my turn. Not much goes on until the bottom of the 5th; when Corey Hart leads off with a walk, and Rickey Weeks hits into a force out which results in Hart being called out at second base. Weeks advances to second on a throwing error by yesterday's hero Aaron Hill. Cody Ransom singles to drive in Weeks from second, but Maldonado hits into a double play in the next at bat, to end the inning. The game once again, gets pretty quiet until the bottom of the 6th, and Carlos Gomez hits a home run to centerfield.

Little else to touch on, until the top of the 8th when Stephen Drew and Aaron Hill hit back-to-back singles, and Parra hits into a force out at second which ends up scoring Drew. Kubel strikes out, and Goldschmidt grounds out to end the inning. The bottom of the eighth starts off with a Martin Maldonado single. Hill dived for the ball, but ended up deflecting it off his glove. Aoki singles on a ground ball that was deflected off of Bryan Shaw's glove. Bryan Shaw strikes out the next three batters to end the inning. Miguel Montero manages to hit a homerun, and Ryan Robert singles, but that's all the Dbacks can muster before the final three outs are made, and the game ends. 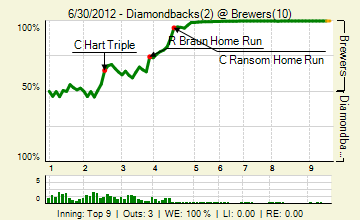 Zavada's Mustache gets the COTD for this gem.

He doesn't always hit for the cycle,

But when he does, he does it twice in two weeks.