(Note - There are many photos in this post, so those still on 28.8k Dial Up connections plan accordingly. All of the photos were either taken by myself of jinnah)

Minor League baseball has many uses. For big teams, they use their affiliates to groom and train prospects, so they can get ready for the big leagues. For many cities across the US (and occasionally Canada), it gives markets that have little to no chance of landing a Major League team a baseball team that the locals can follow. The most obvious use for the fan is the fact that they are able to see someone before they are called up and possibly become a star. This gives a fan a sort of "Baseball Hipster" cachet.

"Yeah I saw that guy down in El Paso before everyone else liked him. It was cool, I guess."

In case you have recently awakened from a coma or took a year-long siritual sojurn into the Atacama Desert, you are aware that the D'Backs selected UCLA pitcher Trevor Bauer with the third pick in the 2011 MLB Draft. With that pick came a guy with an unorthodox training and warm up regime, and a different sort of personality than one is used to in baseball. Yesterday, he made his state of Arizona pitching debut. I was there, here is a report on his start, some stuff about other guys who were there, and how watching a game in person with Snakepit people is always awesome. 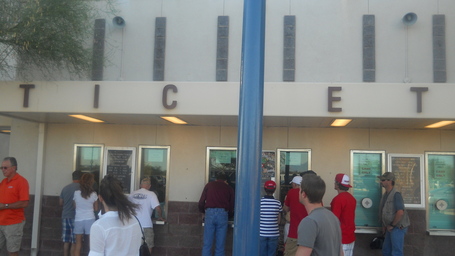 You know what's an exciting thing to photograph? A ticket office! Via me.


The Tucson Sidewinders Reno Aces were in town to take on the Portland Beavers Tucson Padres. The Tucson Padres are a thing that I am glad exists, but are sort of difficult to get behind. It's the "Padres" part. They also play at Kino Veterans Memorial Stadium, which is a nice facility (despite the warnings from Cubs fans that because it was built in 1998 it is a death trap) but located in a far away and somewhat difficult to access part of town, especially if you live on the north or east side of Tucson. As such, the Padres are last in the PCL in attendance. The team tried to counteract that by staging a promotion on the night of the game: $15 and a Wristband got you 8 alcoholic drinks. The county told the Padres: "Yeah, no". So they changed the promotion to "cheaper drinks night". The combination of that, the Aces in town, and Bauer did seem to bring in an extra 1,000 fans from their season average.

I want to also say that the woman who sang the National Anthem (her name eludes me) was top notch and just sang the song. She might be called up, but we all know how PCL Anthems are a bit inflated, and so she might need some seasoning before the big time. 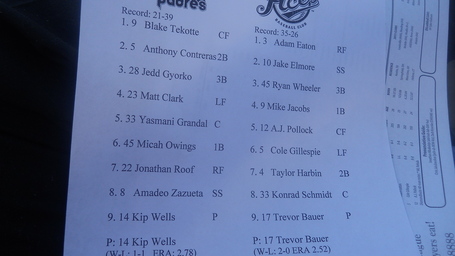 The complementary lineup paper. Via me.

But enough about booze and singing, you want to know about Bauer. Unfortunately, I arrived at the park after he finished his traditional long toss warm-up, but he was warming up in the right field corner. The first thing you will notice about him is that he is incredibly intense. This applies to both his pre-game rituals and during the game. I didn't have a good view, but I imagine he was probably also intense in a ritualistic way in the dugout. Skins pointed out on twitter that this may lead some fans to not like him, as he might seem aloof, but I think Bauer could be one of the few guys to be able to get away with that. I approve.


You'll notice in the beginning of that video Bauer doing his "Crow Hop" warmup. It is quite striking in person and Konrad Schmidt is a braver man than I ever will be. Bauer has drawn comparisons to Tim Lincecum and in watching his motion I can kind of see that. It has a lot of moving parts that just seem to flow well together.
Bauer was facing a Tucson Padres lineup that included: 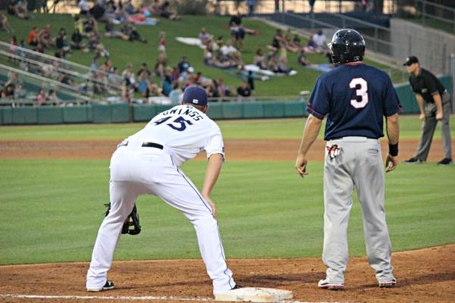 Another quirk of AAA baseball is seeing guys that make you say "Wait, he's still alive?". Wells falls into that category. San Diego has had a fair share of injuries this season, and so the Tucson team has been heavily farmed, and so Josh Byrnes and co. have had to resort to signing cheap veterans to fill rosters (the Padres have recently signed Jason Marquis and Ross Ohlendorf).

It sounds like I'm setting up a "Don't take too much from this start!" cautionary tale about Bauer, but screw that. Whatever "On" or "In the zone" is for a pitcher, he was that last night. Sometimes it seemed like his control was off, but he was incredibly efficient with his pitches. He only threw 9 in the first inning, and had two other innings of 13 pitches. According to Nick P on twitter, he topped out at 96 MPH on his fastball, and was still hitting 95 in the7th before he was taken out. He was getting both swinging strikes and called strikes, the latter caused Padres manager Terry Kennedy to become quite animated and get himself ejected.
Bauer also struck fear into the heart of opposing pitchers. In his first at bat, Wells walked him on four straight pitches. (Note: I am not going to give a detailed report of Trevor Bauer hitting. He hits like a pitcher.) 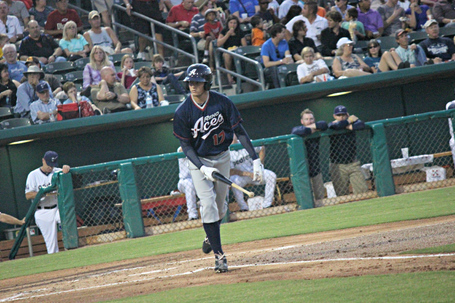 Bauer taking his walk. Via jinnah.

Bauer's final line was: 7 IP, 5 H, 0 ER, 2 BB, 11ks on 98 pitches. He only allowed one extra base hit all night, a double in the 6th to Anthony Contreras. He looks polished, and I would wager a sizable sum of money that he is the next starter called up, whether for injury or possible trades for the D'Backs. The Aces won the game 4-0. Frequent commuter A.J Pollock made two diving catches in Center, and Adam Eaton is crazy fast. Takashi Saito, the D'Backs relief signing that time forgot, also made a rehab appearance in the 8th and looked solid. There was no Stephen Drew in the lineup, as the team wanted to give him some rest after playing a few days in a row (or he took himself out of the lineup to think about his money. Your choice, but it's the former). He will be playing tonight for anyone interested. 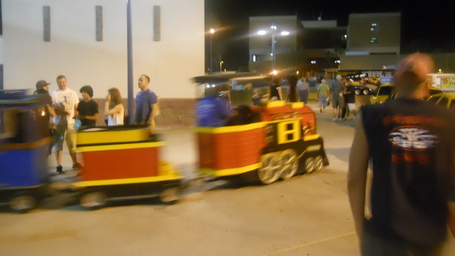 The train that takes kids around and then out of the stadium after the game. Via me.

The discovery that Bauer was pitching last night prompted an impromptu Snakepit gathering. Myself, DBacksSkins, jinnah, luckycc, emilylovesthedbacks, bryn21, Zavada's Moustache were there, as well as a surprise appearance by former Snakepit editor and prospect guru Dan Strittmatter. We weren't the only people cheering for the Aces, but there's a good chance we were the loudest. The stadium seemed to be split in half: people on the first base side were for the Padres, and people on the third base side were for the Aces.

We were very close to the field, so there is little doubt that players heard us. I recall Padres SS Amadeo Zazueta giving us the stink eye over something said by one or more of us (I can't remember what, sadly). Also: Emily does not think highly of the career prospects of Padres reliever Eddie Kunz. We were crackin' wise all game, the two guys in the row in front of us thought we were hilarious (and we are, let's not kid ourselves). There was also an awesome moment where a DUDE IN FRONT OF US CAUGHT A LINE DRIVE WITH HIS HAT HOLY CRAP IT WAS AWESOME (all caps for emphasis).
Snakepit gatherings, if you haven't been to one, are pretty much like faster paced GDTs. You should get yourself to one if you can. In fact, there's one next Sunday at Skins and jinnah's place. We spent a good deal of time outside the gates after the game just talking about stuff (including the merits of Brian Fuentes, which D'Backs fans found out firsthand last night.) The General Manager of the Tucson Padres, Mike Feder, came up to us after awhile and thanked us for coming. We talked about Bauer and the Padres system and their injuries for a little bit. Kudos to him for taking time to talk with clearly opposing fans, and being a cool guy.

To summarize: Trevor Bauer looks awesome at this point in his career, and Snakepit people are awesome :). It will not be too long before D'Backs fans get to experience Bauer in person at Chase Field. 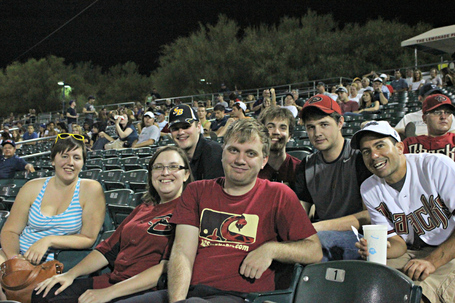