Daniel Hudson posted a zero in the first inning. That was largely the extent of the good news for him this evening, as a terrible second frame saw him charged with seven hits and six runs, all earned. Hudson had to be bailed out of the second frame by Collmenter, the first time that has happened to an Arizona starter in almost three years. But in the kind of comeback which has been all too rare this year, the Diamondbacks clawed their way back, to get within striking distance in the ninth, just two behind. The first couple went quickly, but then Chris Young walked and Aaron Hill singled, to set up Ryan Roberts for a chance at more heroics...

Y'know, how I was saying just yesterday, we haven't had a walk-off win this year? WE HAVE NOW!

Remember Billy Buckner? He was the last Arizona starting pitcher not to make it out of the second inning, also going 1.2 innings on June 26, 2009 - coincidentally also against an AL West team (the Angels) at Chase. All told, it has now happened 15 times for Arizona, Hudson's name now entering the books alongside such "great" starters as Edgar Gonzalez, Russ Ortiz and Byung-Hyun Kim. Hey, at least it was five more outs for Huddy tonight than Armando Reynoso got back in April 2000.

But it certainly was worrying, as the A's had absolutely no trouble hitting him, even if there was a certain amount of Death By BABIP present. Probably the tipping point was the two RBI single allowed to the opposing AL pitcher. Though in Hudson's defense, Tom Milone came up through the Nats organization and wasn't exactly a rabbit. He hit .273 in the minors, and followed that up with a three-run homer off the Mets' Dillon Gee on the first pitch of his first major-league at-bat. But, still: AL pitcher. Hudson seemed to implode after that, and with his season ERA now above six, it has got to be a subject of concern for Arizona.

Credit Josh Collmenter for a very effective appearance in long relief. He went 3.1 scoreless innings, retiring six of the ten outs recorded by the K. He scattered three hits and a walk, and those who said he might be better off in the bullpen could be right: Collmenter's ERA in that role this season has now dropped to 1.53, having allowed three earned runs in 17.2 innings, since being removed from the Diamondbacks rotation. Even more impressive is his K:BB ratio as a reliever, which sits at 18:2. This evening, he did exactly what was needed: steadying the ship and giving the offense a chance to chip away.

And chip away is exactly what they did. Though the very next inning was more of a slash, the six-run deficit being cut in half. Arizona got on the board thanks to Willie Bloomquist singling home Ryan Roberts with two outs after the latter's double, and then Jason Kubel clubbed his sixth home-run of the season, a bomb just to the right of the batter's eye estimated at 457 feet. It would have been an even bigger inning, had Aaron Hill not have been robbed of a homer at the D-backs bullpen fence in left, by what has to be a catch of the year candidate from Seth Smith. Hill just had no luck tonight, repeatedly hitting the ball at people.

Further chippage ensued in the bottom of the fifth, when Paul Goldschmidt had his eighth homer of the year, having already extended his hitting streak to 15 games with a single in the first (we left the bases loaded there, when Chris Young struck out). Goldzilla's run is the longest by a National League first-baseman this year: Freddie Freeman had a 20-game hitting streak for the Braves in July and August last season. Then, in the bottom of the sixth, an RBI double from Kubel and Justin Upton's second hit of the night brought the Arizona faithful tacos and tied the ga....

Ah. Sorry. Turned over two pages and skipped over the top of the sixth there, didn't I? Unfortunately, Craig Breslow didn't. He got the first two outs, but a double and home-run to Hill-robber Smith pushed the Athletics tally to eight, and proved the eventual margin. Bryan Shaw, Mike Zagurski and J.J. Putz did post zeroes the rest of the way. But the Diamondbacks offense could do little better against an Athletics 'pen including former Arizona prospect Ryan Cook, who struck out the side around Willie's third hit of the night, reducing his season ERA to 0.69. Sigh. We put two on in the ninth, giving Ryan Roberts the chance of walk-off heroics...

Of course, he'd been here before, most notably completing the incredible comeback against Los Angeles late last season with a walk-off slam. But the 2012 version was rather different, coming into this came hitting only .233, with a mere three homers, and an OPS below Josh Bell. However, A's closer Brian Fuentes seemed rattled, having problems getting on the same page with his catcher, and on a 2-1 pitch, Roberts connected, driving the ball to left-center and just far enough to get over the fence and give the Diamondbacks their first walk-off win since...well, since that game against Los Angeles last September.

Remember I said Hudson was the 15th AZ starter to go less than two innings? He was only the second ever to do so in a team his game won - and the other, in 2000, saw Todd Stottlemyre removed after only 14 pitches with a sore elbow, so wasn't quite the same. Hudson is the first major-league pitcher to record five outs or less and give up six or more earned runs, in a game his team won, since Esmil Rogers of the Rockies in August 2010, in a game where Colorado ended up beating Atlanta 12-10.

The victory is the D-backs' third in a row, something they haven't done since May 1, and gives them five wins at home in their last six games. I hate to use the word "momentum," but on a night when everyone else in the division lost (the Dodgers getting no-hit), there are tiny shoots of hope peeking through the apathetic despair. Got to keep it going the rest of this series though. 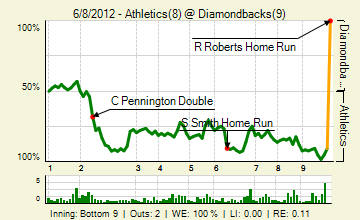 Yeah, I know Star Wars Day is technically tomorrow, but they played music from the films for the fireworks tonight, so that's good enough reason for me. If that WPA for Roberts holds up [and B-R.com uses a slightly different method], it will be the second highest number posted by a Diamondback in franchise history, surpassed only when Travis Lee reached 104.4% in June 1998. a game where Lee hit a pair of come-from-behind homers. That single play was worth +90.7%, which has got to be close to an absolute maximum. Curiously, it's slightly more than the 90.2% for his walk-off slam against the Dodgers.

Comment of the Day goes to a sad Athletics troll, whose first comment was calling Hudson a "fluke", and his second was...well, I deleted it, before dropping the hammer on him, but fortunately, imstillhungry95 still had it on his screen for inclusion.

since this game is uninteresting

my niece’s dance crew made top 2 in abdc.
I hate to ask, but if you could look at their performances and take some time to vote, i’d appreciate it. Her crew would be the first kids crew and 2nd all female crew to win in 7 seasons.

Anyways her crew is called 8 flavahz, you can vote online, voting closes 10am june 13th

"Uninteresting" that, J.J.Miller. - and "crew" you.... Back tomorrow for Jarrod Parker vs. Trevor Cahill, both men going up against the teams for whom they played last year. That should be a fun one.