Share All sharing options for: Diamondbacks Thing of the Week: Randy Johnson CelebriDuck 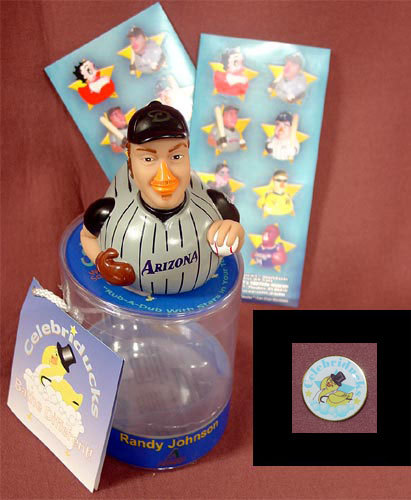 And you thought the Trevor Bauer non-Lego was....strange. Because, of course, the first name in franchise history, which comes to mind when you think of those who should be made into rubber ducks, is a glowering 6'10" strikeout machine. But then, I never knew anything about this whole "Celebriduck" thing: seems they've been around for 14 years, and some of their products are on sale through Ebay for rather a lot of money. Still... The Big Unit with a duck's body, - or a duck with Randy Johnson's head, if you prefer - seems like something out of a bad SyFy original movie. Probably starring Tiffany.

How great is this?! Hollywood meets home decor with the world's first ever celebrity bath tub duck line of the greatest icons of entertainment, athletics, and history. Meet The Celebriducks! This brand-new, MIP Randy Johnson Celebriduck floats and squeaks! Even better, he looks great displayed as part of a Baseball/Diamondbacks collection! FREE CELEBRIDUCKS FAN CLUB MEMBERSHIP INCLUDED. (CELEBRIDUCKSFANCLUB.COM) INCLUDES 2 SETS OF STICKER SHEETS, AND ONE OFFICIAL CELEBRIDUCK MEMBER PIN. A COMPLETE LIST OF CELEBRIDUCKS IS AVAILABLE. Brand-new condition; comes new in original packaging.

Only $9.99 - though the bargain nature of that price is somewhat defused by the five bucks in shipping. Mind you, the appeal of dubiously-accurate celebrity-fowl hybrids is largely lost on me. Ducks are ducks and humans are humans, and never the twain shall meet: if you've seen the wretched Howard the Duck movie, you'll know what I mean.

Turns out the Randy Johnson duck was part of a 21-player set issued back in 2002, following their use as giveaways in various parks that summer. The set also included such delights as Derek Jeter, Ichiro Suzuki and Albert Pujols. As well, I note, as a whole slew of 'roid-using avians, e.g. Barry Bonds, Alex Rodriguez and Jason Giambi. Said Craig Wolfe, the owner of Celebriducks, with what I trust was a deeply-ironic smirk, "We are both excited and proud to now be the exclusive provider of celebrity rubber ducks for Major League Baseball." Sure they had to beat out hundreds of competitors for that contract.

They don't just have sports figu...er, ducks, I mean. Their site runs the gamut from film stars (Bruce Lee, James Dean, Mae West - the last is more than a tad creepy), contemporary figures like Barack Obama, musicians from Elvis to Gene Simmons and the Blues Brothers, plus fictional characters such as Alice in Wonderland and an ocelot of Wizard of Oz ducks.

Probably the most questionable area is the section on their store for 'Religious Celebrities'. Now, I'm not exactly the world's most devout person - I regard Blasphemous Rumours as my perfect funeral song - but the concept of "religious celebrities" seems a little odd, to say the least. Generic items like the angel or mother superior are fine, I think, but Pope John Paul II is getting a bit questionable. And a rubber duck Jesus and Buddha? Why stop there? Why not have a duck nailed to a cross? Or a rubber duck Mohammed? Oh, hang on: that'd be inappropriate. And possibly get their factory burned down.

With regard to the Diamondbacks, there are some players over the years who would probably work better than others in this form. An Augie Ojeda duck? Yep, I can see that. On the current roster, a Miggy duck might be the best choice. A Kirk Gibson one has a certain appeal, if only because I'm pretty sure Cap'n Kirk would absolutely hate it. But overall, it's an idea I personally think should remain in the bath, not on the baseball field.