Fox Sports Game Connect: Another Way To Follow The D-backs

If you were following the game on Tuesday - or the Gameday Thread! - you might have seen myself and soco pop up on the broadcast, for the launch of Fox Sports' new Game Connect widget, which offers a new way for fans to follow the Arizona Diamondbacks during their 2012 campaign. Of course, there's no shortage of these already - MLB At Bat and Gameday, Yahoo! GameChannel, ESPN Gamecast. But there's a couple of wrinkles in the FSAZ version, that might give it a bit of a leg-up on the competition.

After the jump, we run the rule over it and see how it stands up against its rivals.

At first sight, it's pretty daunting, with a lot of information on the screen. This is not an application designed for access on any mobile device smaller than an iPad, it just requires too much real estate. However, once you catch your breath, it's fairly intuitive, with three main sections to it. Across the very top is the current game situation: score, innings and runners on base: below that is the pitch-by-pitch of the current inning (it's pretty fast too, which we liked), the pitcher, hitter and batter who is on-deck. These are not fixed in location, which is a little confusing. The pitcher is on the right in the top-half of the inning, with the hitters on the left, but they swap positions in the bottom half.

For each player, you can swap between their stats and the "social buzz" on them, because that's the real thrust of this particular application - it's integration with Twitter. We'll get into that more later, but in this block, you get to see the last Tweet about the player in question, which is kinda cool, though somewhat limited in that clickable links aren't clickable, you have to copy and paste the address into another window in order to pull up the story. Completing that section is a link at the bottom to send comments or questions to the booth, though I should point out, these do get filtered out by the production truck!

Below that, the page is split into two tall vertical columns, Game Stats and Game Talk. To start with the former, this begins with the current pitcher vs. batter match-up, though drop-down lists let you check the numbers between any hitter and pitcher, so you can look into possible pinch-hitting or relief match-ups. A little crown logo, plus the word "Winner" pops up on whoever the system considers to have the advantage. Though given the past couple of games, I was beginning to wonder if our team had changed their name to the Arizona Winners, the graphic was so prevalent on the home side of the board...

Next is a graph which shows the hitter's batting average by month, though the scale on that goes all the way to 1.000, which is a bit of a waste of space in most cases. On the right, is a kinda cool graphic, depicting a pitcher's stamina as a fuel gauge. It starts off at full, and gradually declines as he throws more pitches. The average in the season so far is used as the empty, and if the pitcher goes much beyond that, the gauge "breaks". That can lead to some oddities, as when Tuesday's Rockies starter had made the vast majority of his appearances in relief; he was "broken" by the third inning. But given the results, that was actually a fairly-accurate depiction of events.

Below that, you get the team leaders in various categories, and their stats - there's no minimum AB requirement, which led to Wade Miley leading the team, not only in wins but batting average yesterday. As with the player cards in the current game situation, you can swap between their stats and the 'social buzz' about each player. The final section is the 'Most Talked About', listing four players from each side, presumably who have the most Twitter activity - for them, the social buzz is the default, rather than their stats. At the very bottom, as at the top, is a button which takes you to more stats, such as the full box score, ball/strike ratio, etc.

The third column, Game Talk, is a Twitter feed containing all the content relevant (and, as we'll see, it's a loose relevance) to the game. This is, at once the best and - though opinion varied on this - one of the most infuriating things about the widget. When I'm watching a game online, I pretty much have a window open on Twitter anyway: so being able to follow the game and see Twitter updates simultaneously in one window is awesome. The down side? Well, I'm a Twitter elitist at heart. If I want to read what you have to say, I'll follow you. While you can filter by 'From Fox', 'Players' or 'Teams', you can't set it only to show those you follow.

Which is kinda odd, because you have to log in to Twitter, in order to use the app to send Tweets, so the information is presumably available. How much you mind that, is probably an entirely personal choice: soco felt the complete opposite, saying "I like that you can see what other people are saying about the game, instead of relying just on my admittedly limited Twitter list." But I would love to see an option to filter by team: I really have no interest in hearing what Rockies fans are saying about anything. Or even, as happened at one point on Tuesday, getting a mountain advisory from a federal agency, that happened to be tagged #rockies. And as you may remember from the Phillies series, filtering Tweets before broadcasting them to a wide audience is sometimes a very, very good thing! 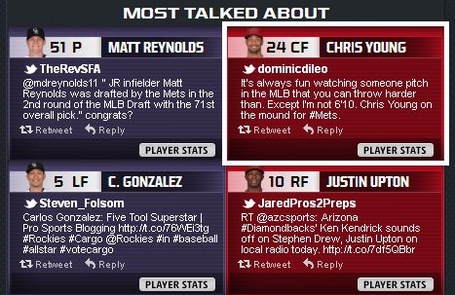 There were some other little glitches. For instance, as shown above, the linking of a Tweet to Chris Young that was clearly not about our Chris Young, and on a couple of occasions, the Twitter feed appeared to get jammed up, only showing my own Tweets until I refreshed the entire widget.

It probably comes down to a choice between this and MLB Gameday at the front of the pack. right now The latter does have some additional features, notably video highlights and the pitch f/X data to see the location, speed and type of each pitch. That may or may not be deemed crucial: as kishi put it, "I've never really been that into seeing just where pitches are landing - instead of giving me insight into the battle between pitcher and batter, it usually just makes me annoyed with the umpire."

All told, it''s an interesting and potentially useful addition to the roster, if you are into social networks like Twitter - if you aren't, this is such a key aspect of Game Connect, that I would say there are likely better solutions for your needs. For those who are, however, with a few tweaks, such as enhanced filtering, it could become indispensable, and I certainly sense integration across media like this is the wave of the future. Check out Fox Sports Game Connect the next time the D-backs are playing. We'll probably see you there.