So, did anything interesting happen off the field today? Like, was anybody on the radio? And by the way, what does the organization think of Drew's rehab pace? I'm just curious. Anyway, let me know.

Today the D'Backs return to the diamond a day after losing the series opener against the Rockies. This loss was also noteworthy as it was the first shutout against the D'Backs this season. Would the D'Backs bounce back? Would the offense come back to life despite the lack of Justin Upton in the lineup? Would Ian Kennedy build on his previous excellent start? Would the second day of the Stryker Trahan era be better than the first? The answers to these questions and more, after the jump!

*Spoilers - the answer to all of these questions is "Yes".

Ian Kennedy began this game by continuing where he left off in San Fran (writers note: Apparently they hate it when you call it San Fran. They like "San Francisco" or "The City", the latter I think is especially pretentious. Anyway, back to the game), and by this I mean he switched over to "Pwn Mode". 7 of the first 9 outs recorded by Ian were strikeouts, and he pitched out of a bases loaded with one out jam in the 2nd to keep Colorado off the scoresheet.

In a seemingly rare occurrence, much like the transit of Venus across the Sun, the D'Backs got on the board first on a mammoth two run homer by Aaron Hill in the bottom of the 2nd. The next time the D'Backs were at-bat, Gerardo Parra got on base on some... creative fielding by Todd Helton. This set up Jason Kubel, who thought to himself: "I like hitting home runs too!", and so he did. The D'Backs loaded the bases, but nothing more came of it. At 33.33333333% through the game, the score was 4-0 in favor of The Good Desert People.

Jason Kubel is not one that is easily satiated. After a Parra single and a Bloomquist double, The Kubemesiter sliced one into center and scored both runners. Miguel Montero hit one past a aging diving Todd Helton that sent Kubel to third. Chris Young then got a hustle-based infield single to score Kubel and like that it is 7-0 D'Backs.

In the bottom of the fifth, two things of note occured:

1. Aaron Hill hit a one out triple that did not score.

2. Jim and soco were interviewed on TV by Mark McClune (photographic proof here) about the Diamondbacks Game Connect feature through FSNAZ. The booth then proceeded to give this site much love, which we appreciate a lot! Any new people directed towards here from that interview are welcomed with open arms! Precious metals and other valuables are accepted at the door.

Ian Kennedy was dealing like the shady guy behind the middle school, but he used up quite a few pitches in doing so and was pulled after 6. His final line: 6.0 IP, 5 H, 0 ER, 1 BB, 12 Ks. The bold is for emphasis, and IPK emphasized himself on the Rockies tonight. Josh Collmenter came in to relieve IPK. He got through the 7th and 8th innings without much incident, but had a rather bizzare at-bat where the umpire forgot how many strikes were aginst him. Jim Tracy politely and demurely pointed this out and Josh was called out.

Parra extended the lead to 8-0 in the 8th with a solo shot. Willie Bloomquist got a hit, and Jason Kubel decided to almost hit his second home run of the game. It hit off the wall and Kubel got into third base. Miggy then got the mystical "Productive Out" and drove Kubel in for a 10-0 lead. Overbay and Josh Bell walked to bring up Aaron Hill with a chance to hit for the cycle. WOULD HE DO IT? Nope. He struck out. However, both he and Kubel were doubles away from the cycle, which is pretty impressive.

Mike Zagurski came in to pitch the 9th, and it was clean. The D'Backs win. There was much rejoicing.

As a quick aside, as I mentioned before, this was the debut of Diamondbacks Game Connect, a site where all the information on the game, as well as relevant stats and tweets, are shown. It is definitely a cool idea, and I am eager to see where it goes, especially since it's a good place to see what other fans and bloggers who you may not necessarily follow on twitter say about any particular game, as well as share baseball based Arrested Development references to an unsuspecting public, both shown below: 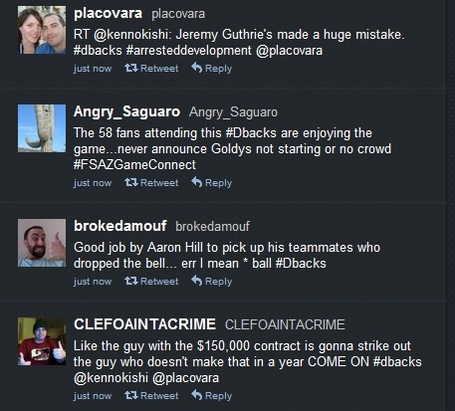 The GDT had 937 comments at the time of writing. imstillhungry95 had over 200 comments, and nobody else broke 100. Geez, get a job or something, kid. Also apparent were: Scottyyy, Clefo, imstillhungry95, AzDbackfanInDc, hotclaws, edbigghead, snakecharmer, duckthenchuck, BattleMoses, rd33, luckycc, Bryan J. Boltik, Rockkstarr12, Augdogs, shoewizard, jjwaltrip, Jim McLennan, txzona, PR151, SongBird, GuruB, DbackCardsFan, Gildo, Fangdango, Marc Fournier, leemellon, 4 Corners Fan, onedotfive, since_98
luckycc had the only green comment, and despite what I may have said in the GDT about something else, it is the COTN (I'm also loathe to introduce the mugs of our editors to the world ;) ):

Listed below is a list of people this pitcher is fooling