So much for that "three-game winning streak" thing. So much for getting this home-stand off on the right foot. So much for repeating in last year's footsteps and delivering back-to-back shutouts, with Joe Saunders on the mound. Instead, another left-handed pitcher - this one making his sixth major-league appearance - blanked the Diamondbacks for five six seven innings, then the bullpen finished off the first shutout of 2012 on Arizona. A mix of bad luck and bad pitches did Saunders in, sending Arizona nine games behind the Dodgers, as we move into the second third of the 2012 campaign.

The shutout, in particular, didn't last long. Well, not on the Rockies' side, anyway. Seven pitches and two batters, in fact. Dexter Fowler tripled to deep right-center, and came home on a sacrifice fly. Arizona had a chance to strike back immediately, after Willie Bloomquist drew a lead-off walk, and Paul Goldschmift doubled. Chris Young walked, to load the bases, but Jason Kubel could only fly out to center. That did extend Goldzilla's hitting streak to 13 games, the third-longest by a first-baseman in Diamondbacks history: Shea Hillenbrand went 14 in 2004, while Mark Grace (absent from the booth tonight) holds the record, with a 22-game streak in 2001.

The Rockies extended their lead immediately, though this is where bad luck for Saunders came in. One run scored on a swinging bunt; another hit was a perfectly placed bloop into the devil's triangle between first, second and right-field; and the second run came home after a cross-up between Saunders and Henry Blanco led to a passed ball. Saunders limited the damage after that to a solo shot into the pool area, but you won't win many games allowing eleven hits, as he did tonight. He ended up working 6.2 innings, with one walk and three strikeouts. He has one win since April, with a six ERA over his past seven outings, though his season ERA is still 3.65.

There was a certain amount of bad luck on this side too, particularly for Aaron Hill, who could easily have had three hits, but ended up twice hitting the ball just at the edge of the Rockies' defense zone of coverage for outs. He did have a hit and a walk, and Roberts two hits, the only D-backs to reach safely more than once. Hill also had a great diving stab in the ninth inning, to take a hit away, diving to his left and still getting the lead runner, throwing to second from his side. That helped bail our Bryan Shaw, who also helped his own cause by picking off Eric Young Jr, in front of his father, the first-base coach for the Diamondbacks. I quite liked that.

That was about it, in terms of pleasant moments. After winning our first four home games of the year, the Diamonndbacks have now gone 6-16 since. That's been the real problem: the team remains above .500 away from Chase, but haven't been able even to play close to that on home territory.. And we were really good at Chase in 2011, going 51-30 [the road record was 43-38, just one game better than the current pace]. We've been outscored 105-140 in the 26 games, which would indicate it has mostly been the pitching: you can't concede 5.4 runs per game and expect to win.

And just to rub it in, Jarrod Parker took a no-hitter into the eighth inning, but had to "settle" for eight shutout innings on one hit. His season ERA is now 2.40, so the whole concept of the Cahill trade - future potential for immediate production - is looking pretty shaky at this point. Oh, look: it's a graph depicting my interest in the game. 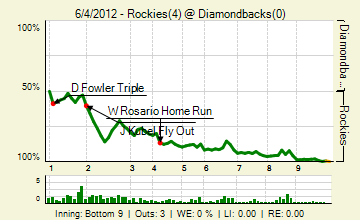 Get married, their children will be ambivalent toward Saunders.

Same two teams tomorrow night. Be at the game with soco and kishi, but we will be keeping an eye on you. So no shenanigans!