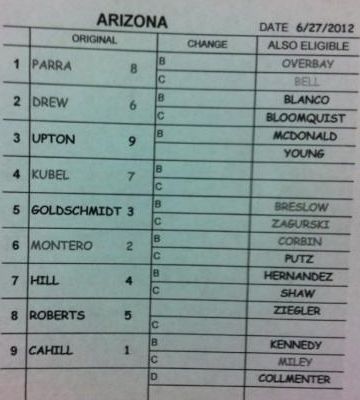 There was always going to be the need for a roster move today, with Stephen Drew making his long-awaited return from the disabled list. However, the injury to Daniel Hudson has necessitated further changes. Because the latter's spot won't be needed for a few days in the rotation, it gives the team a little more flexibility. While there has been no official announcement, the line-up card posted by Steve Gilbert does have some new names on it. As Nick Piecoro was first to note, this seems to indicate who's up and who's down.

If Hudson hadn't been injured, the odds are that Drew's return would have meant the departure of Josh Bell, whose .173/.232/.269 line has been luke-warm at best. However, he is still apparently part of the team, though it's likely this could turn out to be a very short stay of execution, with another roster move needed to make room for Trevor Bauer's arrival on the 25-man squad tomorrow. Instead, it seems that we are going, at least temporarily, with a six-man bench and four-man rotation, plus the usual eight starting position players and seven-man bullpen.

The odd man out of the pen appears to be Jonathan Albaladejo, who managed to get into one game, just as he did in his April call-up. Patrick Corbin's arrival does not necessarily indicate he'll be starting: as we discussed last night, he could be used as long relief out of the bullpen, with Josh Collmenter getting the start against the Brewers in Milwaukee on Sunday. While there has been no word on the results from Daniel Hudson's MRI, his absence from the roster is no surprise - the circumstances of his removal from the game yesterday make a trip to the DL all but certain. Whether surgery will be needed is the bigger question at this point.