Tonight the Dbacks take on the Atlanta Braves. Which Hudson will prevail? Will Daniel make a comeback, or will Tim continue his Dominance over the Dbacks? In order to find out you must go deeper into the recap.

Not much happens in the Dbacks half of the second inning other than a Miguel Montero single. The bottom of the second is where things get really ugly. Chipper Jones and Freddie Freeman double on back-to-back doubles, which makes the score 2-0 Braves. Andrelton Simmons singles which scores Freeman making the score 3-0 Braves. Tim Hudson strikes out and Michael Bourne singles. Jason Heyward hits a sac fly that scores Simmons. Prado and McCann single, and Bourne scores - the latter hit is after Hudson has been replaced by Josh Collmenter. Dan Uggla flies out to finally end the inning.

Aaron Hill and Upton start off the third inning with strikeouts. Jason Kubel hits a home run to score the only Dbacks run. Goldschmidt grounds out to end the top of the third. Not a whole lot happens until the bottom of the seventh other than a few singles. Dan Uggla leads off by getting hit with a pitch. Uggla advances to second on a walk, and Chipper Jones flies out which allows Uggla to advance to 3rd. Freddie Freeman reaches on a fielder’s choice after Bloomquist decides to try and nail Uggla at home plate, but Bloomquist throws high and it was all for naught as both Freeman and Uggla are safe. Simmons doubles, and Freeman advances to third. Freeman scores on a Tim Hudson sac fly. Bourne grounds out to end the inning.

Bloomquist leads off the top of the 8th with a strikeout on a foul tip. Aaron Hill Singles and Upton and Kubel make a couple of outs to end the inning. Jayson Heyward hits a single to start off the bottom. Prado grounds out, and Brian McCann singles and drives in Heyward. Uggla strikes out swinging, and Jones singles. Freeman strikes out to end the inning. The Goldschmidt manages to single in the ninthbut Montero strikes out, and Roberts grounds into a double play to end the game. 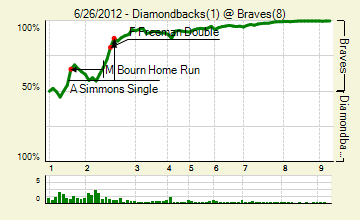