The History Of The Diamondbacks: First Base

Share All sharing options for: The History Of The Diamondbacks: First Base

The classic Abbott and Costello sketch, Who's on First?, might have been written about the Arizona Diamondbacks, because it's a position that has likely been the least stable of any on the field for our local team. Last year was a perfect illustration of this - it seemed that if you didn't like a first baseman on the 2011 Diamondbacks, you just had to wait for an inning or two, and there'd be another one along. Juan Miranda led the team with a mere 46 starts out of 162, five other players also being penciled (lightly) into the starting line-up by Kirk Gibson at one point or another.

Let's go through the history of the team at the position, and see where the magic roundabout takes us.

As with catcher, we'll start with a chart which shows all the players who have appeared in ten or more games at first-base, each season since the Diamondbacks first took the field in 1998. The darker the color, the more games in which the player appeared.

This shows really clearly the fluidity of the position. In 14 seasons, we have only seen five people appear in 120 games at first-base in a season, and none of them were able to reproduce the feat the following year. The only player to start more than 90 contests the next season was Conor Jackson, who followed up his 129 games in 2006, with 107 starts in 2007. But we all know what happened after that.

The problems started from the get-go, with Travis Lee never living up to the hype. He was originally selected by the Twins with the second-pick in the 1996 draft, but they failed to offer him a contract, and MLB declared Lee a free-agent. Enter the D-backs, who snapped him up, and by the time we started play, he was the franchise's first first-baseman. And, continuing that theme, on Opening Night 1998, he got our first hit, then added our first run and RBI, when he delivered the first ever D-backs home-run. However, it was more or less downhill, and by the time Lee was trades to the Phillies in the Curt Schilling deal, his batting line was a forgettable .252/.336/.401.

Greg Colbrunn took over in 2000, and performed adequately, but In 2001, Mark Grace and Erubiel Durazo partnered up for what is the second-best production we've ever received from the position. Grace had the average, batting .298 and Durazo the power, hitting a dozen home-runs in only 175 at-bats. Both were key members of the post-season march to glory: Durazo had a two-run homer off Tom Glavine that provided the margin in Game 5 of the NLCS against Atlanta. while Mark Grace started the Game 7 rally in the bottom of the ninth against Mariano Rivera. Though both returned in 2002, Grace's production declined, and Durazo got dealt to Oakland for, er, Elmer Dessens.

In 2003 and 2004, with Lyle Overbay and Shea Hillenbrand the main men respectively, there wasn't much going on at all. Which made 2005 an entirely unexpected surprise, home-grown prospect Chad Tracy and grizzled veteran (TM) Tony Clark, splitting time but both proving equally productive, in a way reminiscent of this year's combo. As noted the other day, Clark became only the second person ever to get 100 hits and 30 HR in less than 350 ABs, while Tracy hit .308 with 27 homers. Though a chunk of it is likely due to Clark's strength off the bench, our 7.2 fWAR from 1B that year was surpassed by only one team in baseball, who had a guy called "Pujols" there, winning MVP. 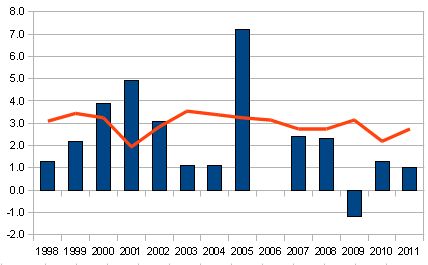 [fWAR for first-basemen in Arizona, by year. Red line is NL median fWAR at the position]

If I rush through the next half-dozen years, it's because they varied from sub-par to absolutely awful. Indeed, the total fWAR accumulated from 2006-2011 was less than that 2005 season. For instance, Clark couldn't recapture lightning in a bottle, hitting below the Uecker line the next season, with a .643 OPS. The nadir was 2009, when the position hit a collective .229, with Rusty Ryal the only one of the five-headed beast of awfulness used that year, to post a positive fWAR. After that, the mere mediocrity of the past couple of years seemed like a step-up, even as Brandon Allen and Juan Miranda failed to make the position their own, as fans had hoped.

But, at the end of 2011, hope was rekindled, with the arrival of slugger Paul Goldschmidt, whose exploits in the minor league had made him a Bunyan-esque figure among Diamondbacks fans. When he finally reached the majors in August 2011, he didn't disappoint, showing some big power against big-name pitchers - particularly, his ownage of Tim Lincecum. For the first time in probably a good five years, there appears to be solidity at the position for the Diamondbacks. Thus far, Goldschmidt and Overbay have already put up 2.3 fWAR, second best in the NL (behind the Reds and Joey Votto) and already making this the best season since 2008.

Hopefully, they can keep it up: at the current pace, the position would be worth 5.3 fWAR for the Diamondbacks in 2012, second-highest in franchise history. I'm probably more optimistic about Goldzilla than Overbay in that regard, but after a series of campaigns where the position has been a glaring weakness for Arizona, it's nice finally to see it as a position of strength. Hopefully, it will remain that way, not just this year, but for quite a few to come: maybe, just to be on the safe side, someone should buy Mr. Goldschmidt a dust-mask...