Share All sharing options for: Diamondbacks 6, Cubs 1: No Joe? No Problem!

Today our beloved Dbacks take on the dreaded Chicago Cubs. Can we continue our winning ways; or will we undone by Collmenter's pitching? Find out after the jump.

The game should have been started by Joe Saunders for Arizona, but he was a late scratch. Needless to say, this provoked a great deal of speculation over the cause, but in the absence of other evidence, it appears he simply felt tightness in his shoulder while loosening up in the pen. This resulted in Josh Coilmenter being forced into a spot-start: he wasn't brilliant, but got through four innings of one-run ball, which is about all anyone could have expected on zero notice. Credit to him and the rest of the D-backs bullpen for piecing together tonight's victory.

Alright, so Reed Johnson starts out this contest with a bunt single, but the Cubs fail to make any more noise this inning. The Dbacks go down 1-2-3 in the bottom of the 1st to end the inning. It's a pretty slow game until the top of the 4th, when Geovany Soto hits his 5th home run of the season to make the score 1-0 Cubs. The Dbacks answer right back in the bottom of the 4th as Justin Upton smokes a line drive to left for a single, and Jason Kubel then promptly deposits a 2 run home-run into the left field bleachers.

The top of the 5th begins with an infield single by Jeff Samardzjia. Reed Johnson strikes out and Starlin Castro grounds into a force out and Jeff Samardzjia is out at second. Alfonso "Blind Squirrel" Soriano "finds a nut", and doubles to right field, but Jeff Baker grounds out to end the top of the 5th. The bottom starts off with 2 quick outs from Chris Young and Ryan Roberts. Brad Ziegler gets his first ever major-league hit with a ground ball to center field. Willie comes to bat and does the same exact thing [not the "first ever major-league hit", just the ground-ball to center...]. Aaron Hill continues his awesome ways by hitting a single, which scores Ziegler. Justin Upton grounds out to end the inning.

That's as exciting as it gets until the bottom of the 6th, when Jason Kubel and Paul Goldschmidt walk, then Miggy hits a triple which scores both Goldschmidt and Kubel, making the score 5-1 Dbacks. Luis Valbuena leads off the 7th inning with a double to left field. Dejesus and Johnson make two quick outs and Starling Castro hits a single to center. Soriano flies out to end the inning. Bloomquist leads off the bottom of the 7th with a walk and Aaron Hill flies out to center, Willie advancing to second. Justin Upton absolutely scorches a ball to right center for a ground rule double into the pool area, that scores Bloomqust to make the score 6-1 Dbacks. Kubel and Montero make the two remaining outs to end the inning.

Chicago makes a bit of noise in the bottom of the 8th with a couple of singles and a walk but ultimately ends up leaving 3 runners on base. Chris Young and Ryan Roberts once again make 2 quick outs but David Hernandez also manages to get his first major league hit on a line drive to right field. Bloomquist also singles but Hill grounds out to end the inning. Hernandez sits the Cubs down 1-2-3 [in the process becoming the first D-back to get a hit and a save since Jose Valverde on Sept. 20, 2003, at Milwaukee] to close out the win for the Dbacks and bring them back to .500. 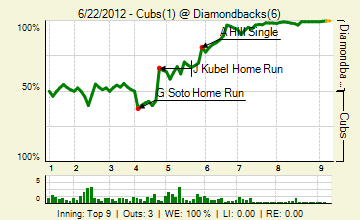 Of course I actually mean “hitters.”

they’re one and the same.