Normally when I'm recapping, I try to go over the scoring plays of the game. I then mix in the things I write down in Notepad, little things that aren't seen in the box score, things that allow the recap to inform someone more than a play-by-play or box score. Either that, or I ramble about things. Well, simply writing out the play-by-play for this game would take like, ten pages, so I'll just throw out a couple of points before talking about how the 18 runs were scored:

Onward to the extreme amount of runs.

Ichiro led off the game with his 2500th hit, which will probably be the SportsCenter lead-in to this game. WOO NATIONAL EXPOSURE! The scoring, however, didn't begin until the second inning, when Justin Smoak crushed a ball to right, a solo shot that gave the Mariners an early 1-0 lead. Seattle later increased their lead in the third, when Ichiro led off with a double and scored on a single two batters later. 2-0 Mariners.

The Diamondbacks finally got things going for themselves in the third. Willie Bloomquist led off with a triple and scored on aaron Hill's (more from him later) sac fly. Upton got on base (!!!) on an error (boo), then moved to third on a double from Jason Kubel. 2-1 Seattle. Paul Gooooooldschmidt, the next batter, batted in both Upton and Kubel with a single to center, giving Arizona their first lead of the night. 3-2 Diamondbacks.

We tacked on two more in the fourth on home runs from both Gerardo Parra and Aaron Hill, the latter of which is doing pretty awesomely well lately. That's right, he's doing so well I'm rocking double adverbs. 5-2 Arizona.

Then... the fifth. Seattle led off, which I guess is typical of the away team or something. Anyway, Hudson was pitching, and now had a larger cushion to work with. Single, walk, three-run home run, single, single. That's three runs with no outs, with men on first and second for Hudson. He was yanked in favor of Craig Breslow, who gave up a three-run home run of his own before inning's end. 8-5 Seattle.

Oh, cool, we get a fifth inning as well. After a home run and RBI singles from Lyle Overbay and Willie B., the score was 8-8, with men on second and third with Aaron Hill up. Hill was walked to face the Justin Upton with the bases loaded. Justin Upton struck out swinging. 8 all.

After completely boring one-run innings from the two teams (6th for us, 8th for Seattle), the game went into extras. Things then went sour. After pitching a solid ninth (only ten pitches), JJ Putz was sent out to work the tenth, and it began to look bad pretty quickly. Justin Smoak was walked to start things off, and Dustin Ackley singled to give the Mariners two runs and no outs. That was enough of Putz apparently, as Brad Zieger was brought in to try and clean things up. A very nice bunt moved the runners over, and set up the pinch-hitting Casper Wells for a two-run single (which bounced off of the mound, mind you), giving Seattle an 11-9 lead. Ichiro hit his second double of the night (third hit overall), scoring Wells and increasing the Mariner lead to three at 12-9. Queue the bottom half of the tenth, which is sure to have an exciting ending, only fitting for a game like this. 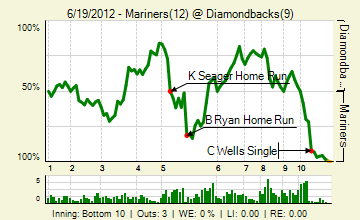 Hey, look, it's a graph of my Fan Confidence votes throughout the season. Nah, kidding, they never spiked that high. As I took this recap up for BattleMoses, I'm not used to weekday comment tallies (whenever I'm reading GDTs, I don't go back and check the comment total). Regardless, we had a quite a busy thread, hitting 1234 comments (at time of writing). Maybe this was because imstillhungry95 was there, who was absent from my last two recaps. He hit 177 posts, leading everyone, with AzDbackfanInDc taking silver with 163 on the night. Also present tonight were Zavada's Moustache, piratedan7, hotclaws, Rockkstarr12, blank_38, $-The Moneyman-$, asteroid, snakecharmer, 4 Corners Fan, Clefo, soco, onedotfive, BattleMoses, Bryan J. Boltik, Muu, SongBird, shoewizard, rfffr, Augdogs, AZDBACKR, mrssoco, luckycc, Fangdango, TinySarabia, kishi, Backin'the'Backs, Jim McLennan, JGreen31, Gibbysdad, Majabe, txzona, and CaptainCanuck.

Comment of the Night goes to Zavada's Moustache, who seems to only be rivaled by Clefo when it comes to wittiness. No offense to you other witty witsters out there:

Too bad he didn't hit it in the pool

Because then it would be Smoak on the Water.

/last Smoak pun of the night

Tomorrow we try and take the series, sending the awesome Trevor Cahill to the mound to take on Jason Vargas. This is also my third recap in five days, and luckily for you guys, you won't have to read my rambles until early July due to some scheduling arrangements. So, I'll talk to you guys in the not too distant future. Maybe I'll recap a first-place team by then.