Share All sharing options for: Diamondbacks Thing of the Week: D-backs Toilet Paper

I had a perfectly acceptable Thing of the Week in mind, but after last night's immensely frustrating fiasco, this one seems a good deal more appropriate. There shouldn't be much need for comment, but I would be interested to hear your marketing slogans for this particular product.. Beyond the obvious suggestions, something along the lines of, "I love this product! -- Andrew Cashner"...

Brand new toilet paper with your favorite team logo embroidered
Logo embroidered on one sheet.
Approx. size of logo: 4x4"
Toilet paper wrapped w cellophane and tied w sports logo color ribbon
These make a great gag gift or just a bathroom décor for that favorite Sports fan.
These are for decoration only...

Disappointed to realize that the toilet-paper is actually your bog-standard (as it were) roll, with only a single sheet containing the D-backs logo. Six bucks, plus another seven in shipping, makes it a pretty pricey way to show your opinion of the team, and at least their Giants toilet paper, though heat-pressed rather than embroidered, has the logo on five sheets, enough to go for a full wraparound. I do wonder how they manage to embroider a single sheet of toilet-paper, which would seem to me more delicate than the finest lace.

It is certainly far from the only "specialty" toilet-paper to be found on Ebay. I was immediately struck by this wholesale offer, of rolls featuring the face of current president, Barack Obama on each sheet. Now, it is $500, but that is for 100 rolls, so should take you well into his second term/post-presidential obscurity [delete according to political tendencies]. I feel obliged to mention, in the interests of political balance, you can get a roll printed with the Starr Report into Bill Clinton's misbehavior, though at a cool couple of Benjamins for a single roll, it would seem to be one for the upper-end of Democratic supporters. Those in the middle can enjoy this 60-pack of variously printed items, which includes Obama, Sarah Palin, and both parties' logos.

That's nothing new, as this World War II vintage sheet shows, depicting Hitler, Hirohito and Mussolini. Though probably the neatest thing found on my trawling of the listings on Ebay was this near 120-year old roll, which even comes with instructions for use as shown below, "When the free end is pulled down, the roll will swing back against its stop - returning to place when a piece is torn off." The fact that it has to come with this pretty much indicates its age. While the Chinese had been using toilet-paper since the 6th century, the form we'd recognize today was only widely available commercially in the US in the mid-19th century, Joseph Gayetty being the instigator. 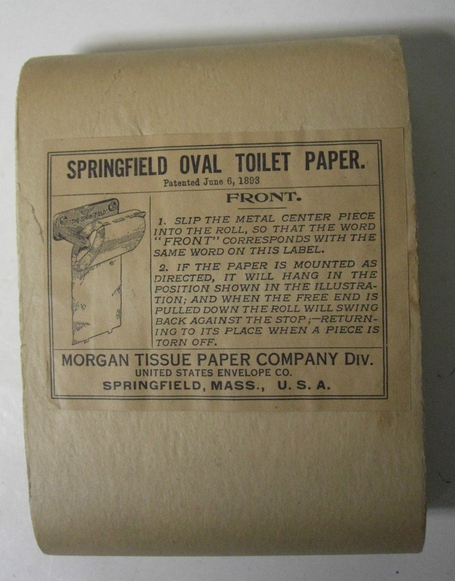