Because I was able to recap both last night's game and tonight's, I have the ability to immediately compare the two. Remember the whole thing about "finding our identity", not knowing which team would show up, and hoping we'd find some consistency? And how it would hopefully be modeled after yesterday's game, where Trevor Cahill shut down the Angel offense, and our bats took out Dan Haren after tagging him for five runs? Ok, well, imagine that, only with slightly less dominant pitching (on our side), and with a heaping scoop of terrible. Ervin Santana retired the first twenty Diamondbacks he faced tonight, and after Justin Upton singled to break up the perfect game, the rest of the offense made it clear that they had no intentions of following in his footsteps. Read on if you care to see how this one played out, but if you're in a hurry, I'll give you a quick summary: nothing happened, nothing happened, Justin Upton got a hit, we lost. I wish I could cut it some other way, but... I sorta have to play the hand the Diamondbacks dealt me tonight.

I think another quick summary would be "hey, at least it was only a one-hit shutout". After having to tolerate the Giants throw a perfecto just three days ago (though, I don't have anything against Matt Cain in particular), stomaching one thrown against my own team probably wouldn't sit well. In those first twenty batters, the Diamondbacks had only struck out four times, so the ball was being put into play; it just wasn't doing anything productive after leaving the bat. C'est la vie. Santana just set down batter after batter, and with each passing out the game felt more and more hopeless, a feeling that never really disappeared, even after Justin broke up the whole historical aspect with his two-out single up the middle in the seventh.

Joe Saunders, however, the birthday boy, was throwing against his former team for the first time, which provides a bit more substance for this otherwise boring recap. Ignoring Mark Trumbo's two-run shot in the first (man, do I regret mocking him in particular at the end of yesterday's recap), Saunders pitched pretty well. In fact, even taking the home run into account, Saunders had a decent nice night, going six innings while only surrendering the two runs to Trumbo. He allowed ten baserunners on two walks and eight hits, but he pitched well enough when it mattered (I suppose) to keep the game close throughout. It was one of those games where people that look at win/loss records will fail to see that Saunders actually picked up a quality start. He just couldn't match his opponent.

And that's about it. I'm left - once again - scratching my head, wondering which team I'll get to watch tomorrow. Like, actually watch, too, because they're playing Los Angeles again, and I get all Dodger and Angel games here in Vegas on TV. Maybe I'll try to spin it and convince myself that it just adds another element to make the game even more exciting: will we get to watch the team that took back-to-back games versus some of the American League's better teams, or will we see the one that got shelled in Texas and nearly found themselves on the wrong side of history against Ervin Santana? Oh, and for those keeping track (read: me), the Diamondbacks are now 2-8 in games that I've recapped, including a loss to the Padres, which counts as an additional ten losses. Feels bad. 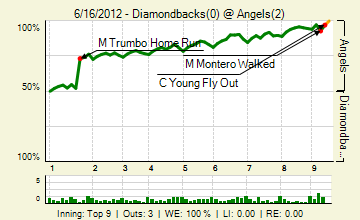 Comment of the Night goes to Clefo (shocking, huh?), who went green with the following comment. It needs no context:

I was just thrown to you

and this is crazy
but here’s a pitch
so hit me maybe?

So, tomorrow's rubber match will pit Ian Kennedy against the Angels' Garrett Richards. It's an afternoon start, with first pitch being scheduled for 12:35 PM PT. Go team, yada yada, so long as it's the one I recapped yesterday. We avoided what would have been the first perfect game thrown against us tonight, so maybe it's safer to just hope we can do that much tomorrow.