After dropping our first two games against the Rangers (in both crushing and heartbreaking fashion), I wasn't entirely sure how the next few games would go. I certainly had an idea - and, sadly, it didn't involve winning. Then, lo and behold, we not only took a game from Texas to avoid being swept, but we sorta killed Texas. Then we rolled into Anaheim and stomped the Angels in the first game. So, once again, I'm stuck in the oh-so-familiar feeling of confusion. Which Diamondback team is the real one, and which one is the fake? It'll probably be a bit before this team finds its identity, but once that happens, let's hope it aligns with the one that's showed up for the last two games. Hit the jump to see how this one played out (and you can learn along with me, as I missed the first half of the game).

Fortunately for me, this wasn't much of a back-and-forth affair. I say it's fortunate because recapping something like that is very difficult if you miss the first chunk of the game. You know what I missed? Trevor Cahill carving up the Angels. Ok, so maybe that's not so fun to miss. I would have preferred missing a really terrible first six innings, then witnessing a whole bunch of awesome over the next three... but I digress.

Ah, the sixth. Former Diamondback Dan Haren had kept our bats at bay through the first five frames (with just the leadoff double marring his line), but that quickly came to an end when the top of the lineup rolled around once again. Kubel belted a one-out double and moved to third on Justin Upton's groundout. Still with one down, Miguel Montero was walked to bring up Aaron Hill, who had just one homer to his name in the month of June (and two since April 28th). If that wasn't enough foreshadowing, Aaron Hill hit a home run. The Diamondbacks were then up 4-0, and with the way Cahill had been pitching, that seemed like enough. Lyle Overbay and Ryan Roberts disagreed with the sentiment, though, and hit back-to-back doubles to bring the game to a 5-0 score.

Trevor did not suffer the same fate as Danny did. He continued to massacre the vaunted Angels lineup, pitching into the eighth while allowing just three hits while striking out eight and holding the Angels scoreless. Mmm. It really was an awesome performance from Cahill, even if I only managed to catch the tail end of it. Brad Ziegler and David Hernandez came in to protect the (admittedly large) lead, and did so with elegance, sending the combined six Angels batters they faced packing and cementing the 5-0 win in the series opener. Hurray, us! 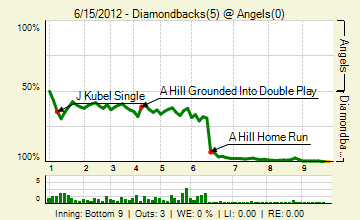 Dunno why Cahill had to go and hog all of the WPA. Selfish jerk. The GDT pulled in a hair over a half-thousand comments on the night, with AzDbackfanInDc leading all commenters with 88 posts on the night; no one else had more than 50. Also present in the GDT tonight were hotclaws, Jim McLennan, Augdogs, Rockkstarr12, txzona, Ridster09, SongBird, luckycc, shoewizard, JoeCB1991, dbacks79, jjwaltrip, asteroid, GuruB, Muu, BattleMoses, 4 Corners Fan, CaptainCanuck, Turambar, dbacksfann, and Bryn21.

Comment of the Night goes to hotclaws, who led with three recs for her comment on why Haren was left in the game down 5-0:

he tries to bite the manager who takes him out early

Albert Pujols? Mark Trumbo? Mike Trout? Nada to Cahill tonight. Oh, and hey, look at who throws tomorrow versus Anaheim Los Angeles: long-time Angel Joe Saunders, and on his birthday, no less. You can catch him pitching against Ervin Santana at 7:05 PT. See you all then.