Share All sharing options for: Diamondbacks 4, Athletics 3: Sweeping Our Way Atop Mt .500

Hello, .500, old friend. Haven't seen you around these parts for a while - 32 games ago, on May 5, wasn't it? Nice to see you again, good of you to pop back and enjoy the sweep of the Athletics completed by the Diamondbacks this afternoon. This wasn't quite the cruising hit-fest enjoyed in the first couple of games. There will be no free tacos to be found tomorrow. However, two RBI apiece from Jason Kubel and Aaron Hill proved sufficient, with Joe Saunders decent, and the 1-2 punch of David Hernandez and J.J. Putz perfect, closing out a 5-1 homestand for Arizona.

Onwards and upwards, people. It's not a playoff spot, but you can see one from here...

The first inning was a tale of two sets of opportunities: one wasted, the other cashed in faster than a Walmart free cigarettes voucher. Fortunately, the former was by the A's. Saunders allowed a lead-off double, then an infield single to former Diamondback Collin Cowgill, with Saunders and Cowgill arriving at the bag almost simultaneously [With hindsight, Paul Goldschmidt should have left the ball to Aaron Hill and covered first himself]. That put runners on the corners with no outs, but Saunders triggered three pop-ups, one on the infield and two shallow on the outfield, and turned Oakland away.

Things started similarly for the Diamondbacks, with one out singles by Chris Young and Justin Upton, followed by a walk to Goldschmidt, loading the bases. Jason Kubel then hit what should have been a double-play ball to the second-baseman. But instead of the inning ending right there, the short-stop flat out whiffed the throw: everyone was safe and a run scored. The very next pitch saw Hill dump the ball into shallow left, scoring two more times - two of the three runs were considered as earned by former Reno Aces pitcher and Aussie (I wonder if he knows Trent Oeltjen?) Travis Blackley (in 2009), because you can never assume a double-play.

The third inning contained two points of interest. An amazing snare of a liner back at Saunders, which led to him doubling the runner of first. And Paul Goldschmidt extending his hitting streak to 17 games - trailing only Mark Grace's franchise record for the position, of 22 games - and also stealing his fourth bag. First basemen do not typically steal bases. No National Leaguer there, for instance, reached even double figures last year, as Goldschmidt is on pace to do. Arizona first basemen particularly don't run. Goldschmidt's four, in barely one-third of a season, already trails just one man: Travis Lee, who swiped 17 in 1999 and eight the year before.

The A's climbed back into the game in the fourth. They got on the board with back-to-back doubles and a single led to a play at the plate, Oakland testing the arm of Jason Kubel. The ball did get there first, but Henry Blanco was unable to hold on to the ball, and it popped out during the tag, so Kubel was robbed of what would have been his seventh outfield assisting tying him with Hunter Pence for the lead in the league. The error charged to Blanco ended a record streak of flawless play by the Diamondbacks at, I think, 114 innings.

Meanwhile the Arizona offense had gone to sleep - Goldschmidt being the only runner to pass first safely since the first - but a Young single in the fifth led to an RBI hit by Kubel, after Young alertly tagged up on a long fly-out by Goldzillla. That made it 4-2, D-backs. Saunders had a solid outing, throwing 97 pitches in his six innings, scattering seven hits and two walks, but only one of his two runs were earned. He also struck out five batters. It's kinda amusing to look at our current starters' ERA, 60 games into the campaign. If there was any more need for evidence that you can't predict baseball, take a look at this ranking

Kubel's RBI proved important, because Bryan Shaw had another one of his "meh" outings in the top of the seventh, giving up a run on two hits and a walk. In his first dozen outings, Shaw had a 1.64 ERA - and, particularly of note, an 11:2 strikeout/walk ratio, in 11 innings of work. Since then, over 12.2 frames, he has a 5.68 ERA, with a K:BB ratio of 4:7. He's not fooling anyone, and hasn't been for the last five weeks or so. While the overall ERA of 3.80 for Shaw is still respectable, I'd be happier if he got some work in slightly lower-leverage situations for a bit, before he gets tagged with any more losses, like he did in San Francisco on May 29.

The Arizona offense shut up shop completely against the Oakland bullpen, who lived up to their reputation. They've had a sub-three ERA this season, and retired all ten Diamondbacks they faced - seven of them by strikeouts. The nearest was a Hill foul-ball which took video review to determine it was just the wrong side of the pole. Fortunately, after Shaw, Hernandez and Putz retired the A's in order: DH was particularly filthy, striking out the side on a mere eleven pitches, despite the inexplicable presence of a wave. Putz was a little lucky with the lead-off hitter, taking a comebacker off his thigh, but then generated a pair of weak ground-balls for a 1-2-3 save.

It is the Diamondbacks' first sweep since Opening Day weekend, and is the fifth straight win since Ken Kendrick's statements regarding Stephen Drew and Justin Upton. Correlation does not necessarily equate to causation, but you can't argue with results. I don't care about the reason, just keep winning. And after the day off tomorrow, it's off on a tough road-trip through the AL West. That'll be a real test of how the team plays up against genuine playoff contenders. 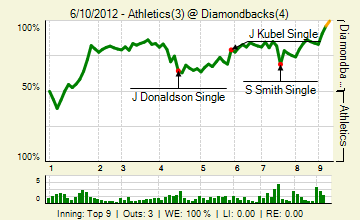 Was anyone else laughing when...

Someone got advice on how to talk to their parents from Lizzie Borden.

Where does this leave the D-backs? Well, here are the NL Standings at the time of writing, with Cincinnati still to play later tonight. Division leaders are in bold, Games Back is based on how far you are behind the second-place wild-card team, which is the Giants right now.

Like I said: we're not there yet, but it's looking an awful lot better than it was before we won eight out of our last ten games.