Diamondbacks 8, Oakland A's 3: Cahill puts the A's to bed (Past his own bed time)

Share All sharing options for: Diamondbacks 8, Oakland A's 3: Cahill puts the A's to bed (Past his own bed time)

Will the Dbacks continue their winning ways? Is the force with them or is it with the A's and Jarrod Parker? Find out in Dbacks 2012 issue #59

The A's do nothing to lead off the game; instead, the Dbacks strike quickly and get on base after Willie Bloomquist scalds a ball to right field. Justin strikes out and Bloomquists steals second, though did appear to get the benefit of the call. No matter, as Jason Kubel then singles Bloomquist home. Miguel Montero grounds out to end the inning. Sadly Cahill's second inning isn't as good as his first and he gives up a walk to Brandon Moss followed by a double to Kurt Suzuki that allows Moss to score, making the game 1-1.

Cahill settles down after than and not much happens until the bottom of the fifth as Gerardo Parra and Willie Bloomquist jump start the offense with a pair of singles. Immediately after, Justin Upton absolutely smokes the ball for a double, scoring Parra. Parker then intentionally walks Jason Kubel, and it seems to work as Goldy strikes out on a foul tip.

However, Montero comes to the plate with 2 outs, bases loaded and sends the ball to Flagstaff for a GRANDSLAM!!!!!!!!! The second such of his career means Diamondbacks are up 6-1! Aaron Hill hits his second double of the night and Jarrod Parker hands out another intentional walk but this time to Josh Bell. So it's now two outs and runners on first and second, but Cahill grounds out to end the inning. In an odd occurrence Bob Melvin gets thrown out between innings for arguing balls and strikes.

That's all that occurs until the top of the 8th as Cahill allows a walk to Coco Crisp and Seth Smith, and that chases our hero out of the ball game. Brad Ziegler comes in to relieve him, and gives up a hit and a sac fly to make the score 6-2, before Kurt Suzuki grounds out to end the inning. In the bottom half, Ryan Roberts hits a single that barely misses the glove of the second basemen to lead off the inning. Parra bunts Roberts over with a sacrifice bunt, Willie flies out and Upton draws an intentional walk. It's 2 outs as Kubel hits a single to centerfield, which brings Paul Goldschmidt up to bat. Paul puts on a lengthy at bat and laces another single to centerfield and extend his hit streak. I feel like the Paul has finally burst out of his cocoon and is now a beautiful, golden butterfly. Montero pops out to end the inning.

Cliff Pennington doubles to left to lead off the ninth inning. Hernandez gets Josh Donaldson to strike out on a foul tip. Jemile Weeks comes to bat and hits a double to left to make the score 8-3. However, Crisp pops out and Reddick strikes out to end the game. DBACKS WIN THEIR FOURTH IN A ROW WOO HOOOOOOOOO!!!!!!!! I finally feel like this team is starting to gain momentum and heat up. Let’s hope for at least six more in a row, so we can see Derrick Hall shave his head.

All in all, it was a great night to be a Dbacks fan. There was a grandslam from Montero and an awesome pitching performance from Cahill. 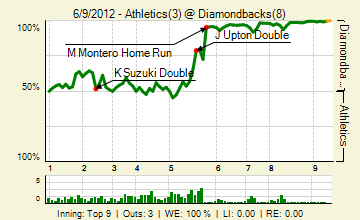 Well, that's all for tonight folks join tomorrow when Arizona goes for the sweep as they send Joe Saunders to the bump to take on Travis Blackley.