For the second night, the D-backs team did their best impression of Dodger fans, not bothering to show up for the early innings. When sitting at Chase Field last night, watching the Cardinals take a 7-0 lead in the middle of the fourth, I was convinced I was watching the worst start of the season by Arizona. Turns out that particular record didn't last long: in the middle of the second inning this evening, the Cardinals were 6-0 up, thanks to Carlos Beltran, who had gone 2-for-2 with two homers and all six runs driven in. Unlike last night, the Diamondbacks showed little or no signs of life thereafter, and dropped their sixth decision in the past seven games.

Oh, and the next time I think about trading recaps with Clefo, someone please pop round and punch me in the lungs.

I don't know which is more depressing, in terms of defeats. The games where you have the lead and lose it late, are probably more excruciating, but this was the kind of contest where the Diamondbacks were never in it. The two runs in the first were somewhat deflating - a rusty nail in the tire of atmosphere at Chase Field, if you wish,. But the second inning was the equivalent of a handbrake turn over a set of spike strips. When Jason Kubel comes to the plate, for the first time, and your win probability is already down to 8.2%, it's difficult to remain engaged and interested in proceedings.

Kennedy had fought through a couple of games with less than awesome stuff. But tonight, there was no escape. Their lead-off hitter tripled to shallow left-center, with an assist by Gerardo Parra's ill-advised dive: Whether it was a single or triple - I'm thinking the Rockies' scorer must have been on an exchange trip to Chase Field - was rendered moot by Beltran depositing a pitch out of the park. Worse was to come in the second, with Kennedy unable to get the third out. That included walking his opposing number on five pitches, then hitting the Cardinals' lead-off batter with a pitch inside to load the bases. Cue Carlos Beltran once again, who uncorked a no-doubter into the pool area.

Five outs in, we were six runs down, and given the bullpen had worked almost six innings the previous night, we really didn't have any option, except to keep Kennedy out there. To his credit, Kennedy sucked it up and gutted things out for five more frames, retiring the last 13 batters faced in a row. The odds of him getting through seven innings on 103 pitches seemed extremely long after Belttan's second homer, but he did it, and it's a good thing too, because I'm not sure how Gibson would have pieced things together. Kennedy's final line: seven innings, six hits, two walks and six strikeouts. If you glanced past the earned runs, it wasn't a bad night.

Offense. I present you the worst at-bat of the 2012 season so far, delivered in the third inning by Justin Upton. Three pitches. Three sliders. Three balls, out of the zone. Three swinging strikes. In particular, look at the location of the first pitch, and you'll see a summary of Upton's struggles, in microcosm. 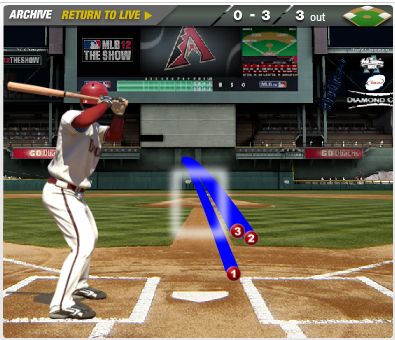 Actually, that pretty much represents the series in its entirety, outside of the single inning in yesterday's game, where we looked like a team capable of competing with the Cardinals. Aaron Hill picked up three hits, Jason Kubel got a hit and a couple of walks, and Miguel Montero broke up the shutout with a double to the gap in left-center which scored Upton (who had got a hit, swinging at ball four, a good six inches inside). The Diamondbacks added 11 more K's to the 13 picked up last night - Cody Ransom, I note, may have homered, but also has seven strikeouts in his nine PAs this series,

Arizona's struggles at home continue - since winning their first four games at Chase, they've gone 2-9, and been outscored 39- 68 in those eleven games. That's something which has to get turned around, because you don't make the post-season without winning at home. The worst home record among the four NL playoff teams last year was these Cardinals, who went 45-36: Arizona will have seriously to step it up, to reach even that mark. But, man, I have to say: this St. Louis team is mightily impressive. After finishing last season strong, they retooled, despite the loss of some key pieces, and have come out of the gates even stronger.

This Diamondbacks team, in contrast, is just playing so completely flat, that it's hard for them to see a way out of the funk. Admittedly, we're not even one-fifth of the way through the season and there's a lot of games to be played yet. We weren't doing any better in 2011, and that ended okay. However, the counter-argument would be the surge which was about to take place last year, following a rather lucky win over the Dodgers, where we were one-hit. Newton's First Law of Baseball Motion states that a team which sucks will typically continue to suck until an external force is applied to it. Who, or what, might that force be? Discuss... 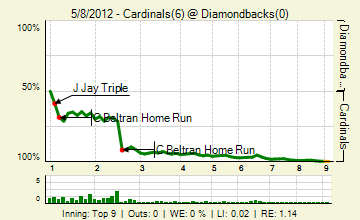 but when he does, I prefer Dos Equis

"Americans can always be counted on to do the right thing...after they have exhausted all other possibilities." - Sir Winston Churchill
Proud Member of Baseball Fans Against Puncuation (BFAP)