Share All sharing options for: Diamondbacks Thing Of The Week: Bad Bobbleheads

This one was inspired by seeing the Johnny Estrada bobblehead - the seller appears to have six of them, for some reason. To which my first reaction was, "Why the hell did we have a Johnny Estrada bobblehead?" He was here for only one year, never did much of note, and wasn't exactly a fan favorite. It got me thinking about the other bad bobbleheads the Diamondbacks have had in team history.

I'm not talking here about bobble heads which completely fail to resemble the player they are supposed to represent - this atrocity, which is supposedly Jason Heyward, comes to mind as a worthy nominee in this category. No, I'm talking about the players in Diamondbacks history who were least deserving of commemoration in goveaway form. I mean, this is an honor given to only a handful of players, at most in any given season. It wouldn't be difficult to come up with an appropriate number of deserving candidates, who have shown their merit through long, distinguished service to the club. But it's not always the case. Jay Bell, for instance, never got one.

After the jump, you'll find the least-deserving Diamondbacks to have been bobbled.

Here's the methodology. The D-backs site has a convenient listing of every bobblehead issued by the team since they started handing them out in 2001. Saved me a trip to the Marlins' museum, I guess. The metric of choice is bWAR, and I included only a player's time with Arizona, only up to and including the season in question. That sound you hear is Tony Womack breathing a sigh of relief. Because he was actually okay, up to the point when he got bobbled in 2001 (1.8 WAR) - it was thereafter he became sub-replacement level.Players may go on to do great things, but it's what they had done, for Arizona, at the time of their bobblehead, which matters here.

General thoughts. Hitters seem much more likely to get a bobble-head than pitchers. The only five of the latter to have been boxed up to date (J.J. Putz and Ian Kennedy will become #6 and #7 later this year) are Randy, Curt, Brandon, Dan and Micah - and the last-named was probably a better hitter than he was a pitcher. Can't really argue with any of the other four though, given they'd be hard-pushed to find room for their own likeness on the mantelpiece, given all the other silverware present on it.

There also haven't been many dubious bobblers of late: even "fan favorite" Augie Ojeda in 2009, had 2.8 WAR up till then, so missed the cutoff comfortably. I think it's probably significant that we don't recently use them with players in their first year on the team. As we'll shortly see - and as Los Anaheim Angels fans will no doubt testify - deciding a player deserves a bobblehead before they've proven themselves with your team can turn round to bite the franchise in the ass...

5. 2005 Shawn Green 0.8 WAR (2005). Lowest eBay price: not available.
This one seems to be a bit of a rarity. Searching for him on eBay, comes up with a lot of the 2002 version, put out when Green was still with the Los Angeles Dodgers,. but none of the Arizona edition from three years later. He came to the desern in exchange for a three-year, $32 million contact extension, but half-way through it, we were paying the Mets to take him off our hands, and were delighted that they agreed to do so. 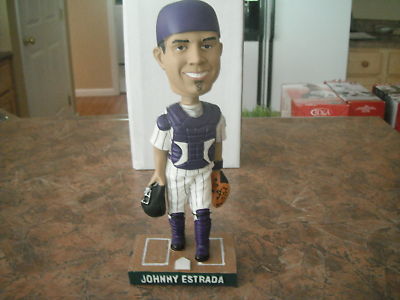 4. 2006 Johnny Estrada 0.5 WAR (2006). Lowest eBay price: $3.99.
This must have been a rush job, as Estrada was only traded to the D-backs in December 2005, and as noted above, shows the peril of having a bobblehead for a player who has only just arrived. Estrada did bat .302, but it was an utterly empty .302. He became the only NL player since 1981 to hit that high in 400+ PAs, but still have an on-base percentage below .330. Traded on to Milwaukee the next winter, and by all accounts, his departure was completely unmourned, by both fellow players and the fans.

3. 2004 Richie Sexson 0.3 WAR (2004). Lowest eBay price: $4.99.
They should have had his bobblehead night in April, because by the time they did, on July 17, Sexson had already had his last AB for us, Sexson's Arizona time basically ended three weeks after it began, blowing out his shoulder on a checked swing. When he came back in mid-May - same thing happened. $8,725,000 = about eighty grand per trip to the plate. Maybe they should have made the most of it, and handed out tiny slings as a bonus item in July.

2. 2007 Carlos Quentin -0.2 WAR (2006-2007). Lowest eBay price: $8.99.
This was scheduled to be handed out to 35,000 fans on July 28th, barely a year after Quentim's major-league debut. However, he was struggling so badly that season, batting a mere .210 over 66 games, Carlos got himself sent down to Tucson at the start of July. But the day before his event, the team deal Scott Hairston to San Diego for reliever Leo Rosales, fortuitously opening up an outfielder roster spot for Quentin. What are the odds against that?

1. 2007 Conor Jackson -0.4 WAR (2005-2007). Lowest eBay price: $24.99.
Between this and Quentin, if the team suggests a Trevor Bauer bobblehead night next year, we might want to storm Chase, purely for Bauer's protection. It seems that giving an Arizona prospect a promotion like this is a kiss of death. Jackson did have rather more tenure than Jackson, having debuted in 2005, but he'd hardly lived up to expectations, with a .794 OPS by the time of his evening came around in September 2007. That's particularly poor for a 1B, especially one that was no great shakes on defense either. He'd go on to have a solid 2008, but you know the rest of the story. Be careful shaking this one. You don't want to release any fungal spores... 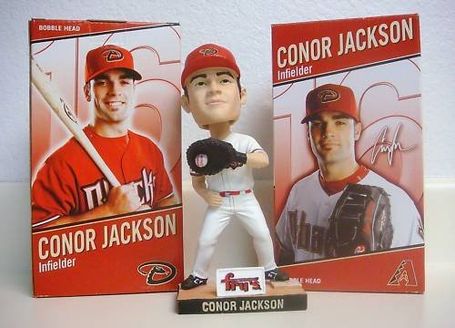