In today's issue of Dbacks 2012 Joe "The Bazooka" Saunders takes on Ryan "The Enigma" Vogelsong. Will Johnny Mac save the day again? Will Justin Upton finally hit 4 home runs in 3 at bats? Or will Vogelsong continue his Cinderella story and dominate? Find out in issue #50 of Diamondbacks 2012!

The Dbacks start off the first inning K'ing in order 1-2-3. Nothing else of note happened until the top of the second, when Chris Young walks and then advances to second on a wild pitch. Josh Bell then singles him home. The Diamondbacks and Giants don't do much else until the top the of the 4th, when Justin Upton leads off with a booming double to right field. Miguel Montero gets hit by a pitch, Chris Young flies out to center, and Paul Goldschmidt hits a single. The bases are now loaded with one man down. Inevitably, Josh Bell then pops up, and John McDonald hits a force out to end the inning.

The Giants respond by also loading the bases, but Joaquin Arias strikes out to end the inning. An Aaron Hill single marks the only thing of note in the fifth. Things get a bit more exciting in the top of the 6th, when Miguel Montero walks to lead off the inning and Chris Young proceeds to double to left. Now, there are runners on second and third with no outs. However, Goldy grounds out and Josh Bell reaches on a fielder's choice, but Miggy is thrown out in a rundown. John McDonald gets an intentional walk but Joe Saunders strikes out to end the top half of the inning.

Ryan Theriot leads off the Giants half of proceedings by flying out to right field. Melky Cabrera singles on a ground ball to third that was totally misplayed by Josh Bell and Buster Posey hits a double to score Cabrera. Angel Pagan singles and then Saunders is replaced by Brad Ziegler who walks Brandon Belt and then gets Joaquin Arias to hit into a nice inning-ending double play.

Not much happens in the 7th past a Jason Kubel single, but on the bottom of the 8th, Bryan Shaw comes in to replace Brad Ziegler. Shaw walks Ryan Theriot and gives up a single to Melky Cabrera. Buster Posey hits a sac fly to center field, scoring Theriot. Angel Pagan singles to right, which puts Cabrera on third base. After a stolen-base, Shaw intentionally walks Brandon Belt. Joaquin Arias grounds into a force out but Cabrera scores, making it 3-1 to the Giants. After Brandon Crawford grounds out to end the inning, the Diamondbacks go down 1-2-3 in the ninth to end a miserable night of baseball.

We left a collective 21 runners on base, were 2-for-9 with runners in scoring position (one of which didn't score a run) and had 10 strikeouts. This team has become miserable to watch. We had an absurd amount of chance to score but didn't. This team is stagnant and is no longer the hungry team of last year was that determined to win games at any cost. Something needs to happen. 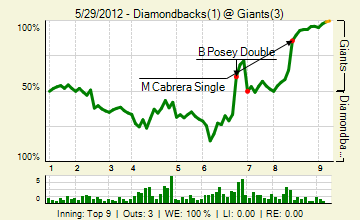 Join us tomorrow as Ian Kennedy takes on Tim Lincecum in a battle of struggling aces.