Remember the 2011 Diamondbacks? The team which went 28-16 in one-run games, and had ten wins when trailing at the start of the eighth inning? I miss them. For this afternoon's defeat means that Arizona have gone 0-9 in one-run games since sweeping the Giants at the start of the season, and they still haven't pulled out a late-inning comeback this year. Ian Kennedy pitched well, but Ross Detwiler pitched better. Oh, and the eventual winning run was driven in by my new Most Irritating Player in Baseball [Troy and Buster, please move down the bus].

Let's forget this one, get out of Washington, and hope for better in New York.

I blame FSAZ for the loss, naturally, the defeat being the result of their screening an interview with Bryce Harper before the game. As imstillhungry95 pointed out, "If their excuse for interviewing Harper last night after the game was because all the Dbacks had left the field, I wonder what their excuse is today." There's just something about the local TV station making a fuss about the opposition, which smacks of.... well, treason might be a bit strong. Call it, at least, sleeping with the enemy. I certainly know my interest in what Mr. Harper has to say is somewhere between slim and none. Maybe get back to me, when he has more than four major-league games under his belt.

The tone for the afternoon having been set early, the game got under way, with the first memorable incident Harper's opening trip to the plate, in the bottom of the first. In the box-score, it'll be overlooked as, "Harper grounded out to first." But that conceals the eccentricity of it. Harper actually hit a comebacker to the mound - but Kennedy threw wide of Paul Goldschmidt at first, and St. Bryce motored around the bag to end up at second on the error. However, the key word in that sentence is around the bag. Someone on the D-backs alertly noticed he'd never touched it, and before the next pitch, Kennedy threw over. Appeal granted, inning over. Let's all laugh at the n00b.

There was, however, no such escape in the second. Kennedy got into trouble, putting the first two on board. He recovered to strike out the next batter, but an apparently dubious balk-call moved both men forward, and resulted in a simple groundout becoming an RBI groundout instead. 1-0 Nats. That was it through the front five innings, with Arizona being all but incapable of solving Detwiler. To that point, he'd allowed two walks, with the sole hit a single by Ryan Roberts, who was immediately erased by A.J. Pollock hitting intto a double-play. A.J. has a truly miserable start to his career, now having gone 3-for-25, the worst debut streak in Diamondbacks history.

Hope flickered briefly into existence in the top of the sixth, as Willie Bloomquist walked with one out, and Aaron Hill drove him in to tie the score, the ball flying past a flailing Jayson Werth in right-field for an RBI double. However, that was pretty much the end of the Arizona offense, with a Goldschmidt single the only base-runner managed by the Diamondbacks the rest of the way. And hope was short-lived, as a pair of doubles in the bottom half of the inning, restored the Nationals' advantage - the second, of the bat of Harper, provoked mass celebrations in the streets, and will feature in an upcoming three-hour special on Fox Sports Arizona. Bitter, party of one...

Kennedy didn't actually pitch too badly, despite some more wobbliness in the early going. He was efficient through seven innings, and had only thrown 83 pitches to get that far, before he was replaced for a pinch-hitter - offense being more important than defense at that point. He allowed four hits and a walk with four strikeouts, but the two earned runs which resulted were enough to end his undefeated streak at 12 games, the best by a Diamondbacks since Brandon Webb went 14 in 2007-09. Bryan Shaw finished things off, facing the minimum thanks to a convenient double-play. 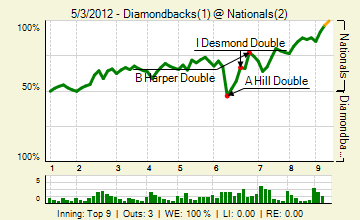 On to New York. A pleasantly Harper-free zone...