You know how there are games where the team falls behind, but you still have the sense that they can come back and win? This afternoon was not one of those games. Arizona fell behind 4-0 by the end of the second, and even as they came back to have the tying run on base with one out in the ninth. I never had the sense that they were truly in this one. Truth be told, I spent much of the game trapped in the Mato Grosso of cables behind the TV, trying to create some kind of order out of chaos. I was more successful in my endeavors than the Diamondbacks.

Trevor Cahill took a while to get his sinkerball under control, not retiring a batter by groundout until the third inning. Unfortunately, the Giants took full advantage of the flatness, swatting Cahill about for five hits and a walk in the first two innings, getting all their scoring out of the way early. They were helped by poor fundamental baseball from Arizona, but the problem our pitchers seem to have had lately - getting the difficult out, then relaxing and being able to get the next one - reared it's ugly head in the first. A leadoff double was bunted to third, but Cahill then got Cinderella Cabrera to stare at strike three for the second out.

However, he couldn't close the deal. Cahill walked the next batter, and when that runner took off for second, Miguel Montero made a poor throw down to second, without bothering to check the runner at third, who then motored down the line to score the game's first run. An RBI single and an RBI triple followed before Cahill could finally escape the inning, having dug himself a three-run hole. Contrast the baserunning shown by Arizona in a similar situation (men on the corners, one out) the very next half-inning. Chris Young took off for second on a 2-2 pitch that was a ball, but seemed to think it was ball four, slowing to a stop before being tagged out.

The Giants added another run on a pair of hits in their half of the second inning, and I decided that it was time t mark Memorial Day and honor our troops by invading the hostile territory known as the back of the entertainment center. So, I can't claim to have directly witnessed much of what followed, though I did poke my head out long enough to see Arizona get on the board, thanks to Justin Upton's ground-rule double down the left-field line. That scored Cahill, who had just got his first hit as a Diamondback, and was unlucky not to score Willie Bloomquist who'd also singled - the ball rolled up the bullpen pitcher's mound in foul territory and jumped into the stands

After that, however, the Diamondbacks returned to their recent struggles against soft-tossing left-handers, as Barry Zito faced the minimum in the fourth, fifth and six innings. A Paul Goldschmift walk was the only base-runner, and he was erased by a Montero double-play. That was also the only walk allowed by Zito, and while the Diamondbacks had their chances, they couldn't take advantage, going 2-for-11 on the day with runners in scoring position. And one of those, Young's second-inning single that preceded his TOOTBLAN, didn't score a run, Matt WIlliams having apparently realized that Jason Kubel runs like the SnakePitette's virus-infected laptop. Though with fewer popups.

John McDonald got Arizona one run closer, with a home-run off the bench to get things underway in the eighth. That's his third of the year, in only 64 PAs, which is most unMcDonald-like: in 2007-08 he only managed a total of two, in 560 PAs with Toronto. That also gives him more long-balls this season than the following players: former MVPs Jimmy Rollins and Joe Mauer, 2011 All-Stars Placido Polanco, Elvis Andrus and Miguel Montero, plus previous All-Stars Ryan Zimmerman, Orlando Hudson and Elvis Andrus. All of whom have twice as many PAs as McDonald. Who is also now hitting .328 with a .916 OPS. It won't last, but boy, is is fun. #cantpredictbaseball.

The Diamondbacks made one final stab at things in the ninth, getting back to back singles from Goldschmidt and Young with one out, to trigger some hope. However, Montero completed a miserable comeback game, striking out, and though Ryan Roberts also generate a flash of exhilaration, giving the ball a long ride, it ended up a fly-ball to right, and the game was over. Cahilll had settled down, going six innings with no further damage, but four runs on eight hits and two walks, even with five strikeouts, was too much for a limp Arizona offense to handle. Craig Breslow and Josh Collmenter posted zeroes out of the bullpen. 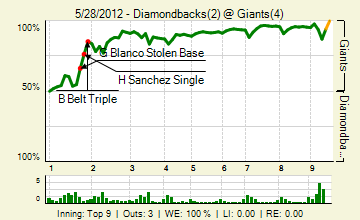 Instead, it's AzDbackfanInDc, for his response to shoe's first post, "Can’t believe I got up at 5 AM to watch this crap."

The sad thing is, the pessimism proved entirely justified. I can't believe I got up at 2pm to watch it. Oh, well: same two teams tomorrow, at a slightly later hour. I'm off to take advantage of 50% off Papa John's pizza, the result of yesterday's Diamondbacks win. Hey, take your pleasures where you can get 'em.