Chase Field Home Dugout
You are the various members of the Arizona Diamondbacks, a professional Baseball team. You won the National League West in 2011, but have gotten off to a slow start this year. You enter the second of a three game series against the Los Angeles Dodgers. You lost last night 6-1, and are desperate for a series win. You have a variety of pitchers to start in this game. 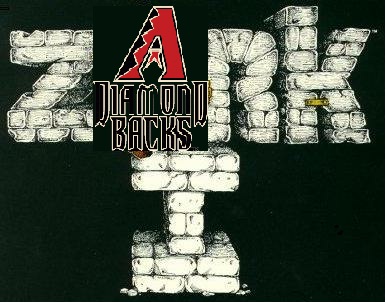 You have started Trevor Cahill, a sinkerballer, in this game against Aaron Harrang, a Dodger pitcher with a silly name. Your faith is initially rewarded when he goes through the first inning unscathed. Your general manager has recently brought up Josh Bell, who has a strikeout rate that would make the Adam Dunn-Mark Reynolds hybrid scientists at the University of Chicago are creating blush, but he is a new toy. What do you do?

Matt Williams is a coach, and thus cannot be started.

You have started Josh Bell! Nothing happens! It is now the bottom of the inning. You are Jason Kubel. There is a runner on second with two outs. The count is 1-2. there is a pitch coming.

You strike out! You leave a runner on base! You are a true Diamondback! It is now the top of the 2nd. Andre Eithier is up. He mashed you good yesterday.

> Ask Andre what university he went to

You can't talk to Andre Ethier!

You walk Ethier. He is now trying to steal, Cahill just got a strikeout!

Ethier is out! James Loney is up.

Loney grounds out. It is now the bottom of the 2nd. Lyle Overbay has gotten a hit. Josh Bell has gotten a 3-1 count!

Josh Bell crushes a pitch to center! It's time for a home run trot!

Bell is now at first base.

Bell is now at second base.

Bell is now at third base.

Bell has scored! It is now 2-0 Diamondbacks! It is the next half inning. There are Dodger runners at first and second with one out.

Your game has been saved

Your shoulder has been eaten by a Grue. You have died!

Game has been loaded.

>Get dude to ground into double play

Lyle Overbay makes a spectacular play to get the 3-6-3 double play! In the bottom of the inning, Justin Upton is up. He has been struggling so far this year, especially with runners in scoring position. Ryan Roberts is on second.

Justin Upton now has a bat.

>Pretend ball is an Azcentral mouthbreather

Justin Upton scorches one and the run scores! The score is 3 to 0 in favor of the Diamondbacks! The game has gone quiet from this point. Cahill has been effective. It is now the Bottom of the 5th. Willie Bloomquist leads off the inning.

Willie hits a double! He is bunted over by Roberts. Justin Upton is up.

Such language in a high class establishment like this!

Upton hits a double! Bloomquist scores! 4-0! Harrang is removed from the game! Scott Elbert comes in. He throws a pitch in the dirt that gets away from Ellis.

While trying to pick up third base Upton is called out.

Upton makes it to third base. Kubel is still up.

Kubel hits it deep enough for Upton to score! 5-0! It is the top of the 6th. Tony Gwynn Jr. gets a bunt single, Elian Herrera hits a ball towards Bell.

Abreu has striked out

Out of angst of not knowing where he went to college, Cahill throws a wild pitch, moving the runners up 90 feet.

>give up fly ball to Ethier

Ethier flies out, but the runner scores.

Loney grounds out on a nice play by Overbay. End of the inning and it is 5-1 D'Backs. The next half inning, Lyle Overbay is up.

Overbay hits a double! Henry Blanco is up

There are no tacos

You can only get them from 4 - 6 PM tomorrow. If you're in Tucson, it seems the only one to get them at is the one on Speedway and Campbell.

>fast forward and take out Cahill

Cahill has been removed from the game. Brad Ziegler has been called.

>Have Ziegler do something stupid

Ziegler tries to throw to second on a bunt. It gets away

>Let Dodgers back into game

Ziegler gives up a double, and is taken out. Craig Breslow gives up a single and it is 6-4.

> Remind us on the fielding scouting report on Josh Bell

Josh bell fumbles a sure double play ball. It is two on and still no out.

>Take Breslow out, even though it is rearranging deck chairs on the Titanic

Breslow is out, Shaw is in.

>Give up fly ball\

/throw it out the window

/go downstairs and stomp on it a few times.

You used the word "screw" in a way I don't understand!

>hope for the best

Shaw gets a double play! It's still tied. Nothing really happens for the D'Backs in the next half inning. Hernandez comes in for the 8th.

>Hope David Hernandez gets over the yips he had in Denver

I don't know the word "hooray!"

>Go to next inning

It is the bottom of the 8th

Curses! Back to baseball: It is now the 9th inning. J.J (Inappropriate Term) is in the ballgame to close.

You now have a paper bag

You now have valium

Gwynn pops out. One out.

>give reason to take valium

>give reason to breathe into paper bag

> give reason to put down paper bag

>piss this game away

Oh look, De Jesus hits a two run double. It's 8-7 now. You hate life right now. You wonder if a monkey humping a football would be a more effective closer at this point. You reeeeallly need some chamomile and a bath. Bottom of the ninth now.

>Get duped into some hope

Bloomquist gets on base on a dropped third strike!

>Do something to make me go "huh"

Roberts tries to bunt, then he strikes out

Upton singles! Bloomquist gets to third.

Kubel grounds into a double play. You lose!

Back as Clefo now. I was hoping this theme recap would be a fun homage to an old computer game. But damn, that freaking game. I am speechless at this point. This might be our Waterloo as far as division hopes go. It was mentioned in the thread: But what was with some of the managerial decisions tonight? I'm specifically thinking of the use of the Bullpen in the 7th (NOW YOU BRING IN SHAW?!?) and the decision NOT to send Upton on the game ending double play. It's not like sending him would have tied the game or anything. I am in the camp of "If Gibson is lauded so much for last season's success, then now he has to be held accountable for whatever this is".

Prepare to get very depressed:

It seems like most everyone on the offense had a decent night. The bullpen just... yeah. Upton and Roberts seem to be hitting better as of late, so hopefully that can lead to something good. If I hadn't written most of it already, I would have not done a theme recap. But I won't do one again, lesson learned. Just gonna copy and paste the rollcall, cause it's that kind of night:

I'll award a SFW and NSFW COTD. SFW goes to ZM for this

FOR A SPEAR TO STAB J.J PUTZ!

And here's a link to Jim's NSFW one.

Well, I'm going to the game tomorrow in hope that the D'Backs avoid a sweep. If there's another game like this I'm might kill myself. Other people may die also. I'm going to play this thing by ear.