In today's issue we have Dbacks hero Patrick Corbin go up against Dodgers peon turned super villain, Chris Capuano. Will Bloomquist had another career night? Will Justin Upton continue to heat up? Or will Dee Gordon go 6-6 with 6 home runs? Find out in Dbacks 2012 issue #43!

The Dodgers start the game by doing a whole lot of nothing outside of a bunt single to Josh Bell - which was more a blown call by the 1st base umpire than an actual hit. The Dbacks follow suit by going down 1-2-3. Now things get a little more "exciting" when Jerry Sands singles and Matt Treanor hits a home run, one out later, to give the visitors a 2-0 lead. Despite the Dbacks best efforts in the bottom of the 2nd, Capuano manages to sit the Dbacks back down 1-2-3. Top of the 3rd and Corbin sends the Dodgers back in to the visiting dugout in order too. Bottom of the third and guess what? Capuano retires the side in order. This guy is trouble.

Top of the 4th is also fairly quiet with Matt Treanor walking and that's all from the Dodgers offense this inning. Bottom of the 4th is the highpoint of the evening, offensively, as Willie Bloomquist miraculously leadoffs with a triple. Aaron Hill singles on a gapper to center field which scores Willie B. Justin Upton and Miguel Montero fly out and Chris Young singles, but Kubel lines out to Capuano to end our hopes of scoring again this inning. Or, as it turns out, this night.

Not much happens in the top of the 5th other than a single by Andre Ethier. Goldschmidt leads off the bottom of the 5th with a single. Patrick Corbin manages to lay down a bunt to get The Golden One to 2nd base, but Willie B turns back into his old self and grounds out weakly to third. Not much happens in the top of the sixth other than an error by Josh Bell which allows Justin Seller to reach base. Bottom of the 6th and Aaron Hill leads off with a ground out but Upton walks. Henry Blanco had been put in for Montero (because Miggy pulled his groin chasing a pop up in the top of the 6th) but Upton gets caught stealing and Blanco strikes out to end the inning.

Andre Ethier hit a solo home run in the second at bat of the seventh inning to make it 3-1 Dodgers . Ronald Belisario comes in for Chris Capuano and sits the Dbacks down 1-2-3 with two strike outs. Ivan De Jesus hits a leadoff single in the top of the 8th then Matt Treanor strikes out and Justin Sellers triples on a fly ball to center field which scores De Jesus making it 4-1 Dodgers. James "I only do good against the Dbacks" Loney hits a 2 run home run to make it 6-1 Dodgers, and suck any remaining interest from the game.

Josh Bell leads off on a line drive single to right in the bottom of the 8th, but that's it for Arizona. Zagurski comes in to pitch the bottom of the ninth and gives up a walk to Ethier but gets out without any damage done. Justin Upton singles to try and start a rally but to no avail, as the next three batters make outs to end the game. 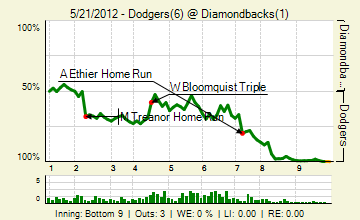 Well, we were unsuccessful tonight but I have a much better feeling tomorrow as we go up against the worst Dodger, Aaron Harang; Trevor Cahill takes the mound for the Dbacks.