Share All sharing options for: Diamondbacks 2, Royals 0: Total Wade-Clipse of the Royals

Arizona beat Kansas City 2-0 this afternoon, behind the left arm of Wade Miley, who blanked the Kansas City Royals for seven innings, lowering his season ERA to 2.14. David Hernandez and J.J. Putz completed the seven-hitter, giving the D-backs their second shutout of the year. Neither of the two runs driven in by the offense came on a hit, yet still proved just enough to give Arizona their first victory this year when scoring less than three runs - they were 0-14 there before this afternoon. The overall result is not only that we took the series against the Royals, we also ended the road-trip with a 4-3 winning record, always a good thing to see.

Miley wasn't particular dominating, and again, the peripherals weren't all that much - three strikeouts to two walks in his seven innings. He threw first-pitch strikes to 60.7% of batters, which is right around average (59%) and his overall strike-rate (64.6%) was there or there about too (MLB average is 63%). But what was notable was the way he attacked the left-handers in the Royals line-up, beating them up with pitches inside. The result was that the southpaws for Kansas City today went 2-for-15, and the other key was Miley coming up big when it counted, making the Royals go 0-for-6 with runners in scoring position. And given the way our offense was (not) hitting, we needed it.

The fourth inning pretty much summed up the situation today, both teams failing to capitalize after getting the lead-off man on second, without any outs. For Arizona, Justin Upton singled and stole his eighth base, but Miguel Montero and Chris Young had unproductive outs, and Jason Kubel couldn't deliver. Miley wriggled out of an even tougher jam, after allowing a pair of leadoff hits, and a ground-out that advanced the runners to put men on second and third with one out. However, he provoked a pair of infield pop-ups to escape the threat, and leave two stranded in scoring position.

The Diamondbacks finally broke the deadlock in the fifth, though at the time it felt more like a wasted opportunity than a breakthrough. Paul Goldschmidt got things started by doubling off the outfield wall, and Aaron Hill then punched a groundball through the right-hand side, Goldie being held at third. John McDonald then reached on a beautifully-executed sacrifice squeeze, which ended up being scored as a bunt single, Goldschmidt also whizzing across home-plate. Gerardo Parra hit into a fielder's choice to put men on the corners, but Ryan Roberts hit the ball to firmly to third, and they got Hill at home. Upton fouled out, though Arizona did at least have the lead.

We added an insurance run in the eighth, and did so without bothering to, y'know, get a hit. Parra was walked to lead things off, and advanced on Roberts' first sacrifice of the year [as Sutton pointed out, interesting Roberts wasn't asked to put down a sacrifice with a runner on third and one out in the fifth]. Parra then took third on a wild-pitch which gave Upton an easier RBI chance. After some, ah, "interesting" strikes, and words for the umpire, Upton deposited a fly-ball almost to the base of the right-field foul. Easy score for Parra...except for the Maginot Line a.k.a. the French artillery of Jeff Francouer's arm, which made it a great deal closer, Parra just sliding beneath the tag.

Arizona did have their chances, but outside of Hill and McDonald's back-to-back knocks, went 0-for-9 with runners in scoring position themselves. Parra drew a couple of walks in the lead-off position, and Hill had a walk in addition to his hit. All told, the K:BB ratio for the Diamondbacks was a healthy 5:4, even though the production was not what you'd want to see. David Hernandez got the first two outs in the eighth with some filthy stuff, but then put the next two on base, before relieving our palpitations with a third strikeout. J.J. Putz did get a 1-2-3 ninth, even if "one" and "two" were rather hard-hit balls to the outfield. 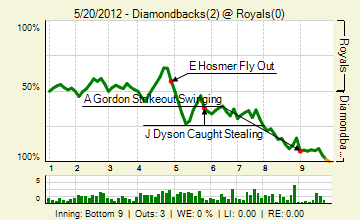 A light Gameday Thread this afternoon - I suspect a good deal of attention being diverted to the Coyotes attempts to extend their playoff series against the Kings, going on simultaneously.. There was a dead tie for first between hotclaws and AzDbackfanInDc, so given her need for a sock [look, just read the thread...], we give it to hotclaws by a nose. blue bulldog was third, and also to be seen were: Clefo, Bryan J. Boltik, Ridster09, Muu, blank_38, USAFIDMT, Jim McLennan, Zavada's Moustache, rd33, dbacks79, jjwaltrip, Bryn21, SongBird and Majabe. No green comments, so I'm giving CotD as a tie, for this exchange after Mark Grace started expounding on the Kelvin scale:

absolute zero about it

We now head home to take on the Dodgers for a three-game set, in what should be a very interesting series - we split the games in Los Angeles, and will want to do better at home. Be nice to have games back at respectable times as well. Now, I'm going out to stare at the sun for a bit.