Well, at the time of writing (1:14 a.m.), I have to be outside of Notre Dame Stadium in seven hours in full cap & gown to begin my procession into the stadium for the first of my graduation ceremonies. So it might be the case that I'm distracted from this whole baseball thing because of, y'know, graduating from college.

........ Okay, fine, constantly checking my phone for baseball updates may be kind of distracting me from graduating.

On a baseball-related note, the three wins on the farm on Saturday brought all four D-backs full-season affiliates above the .500 mark on the season. Team W-L records in the minors aren't heavily indicative of prospect talent, but it's certainly nice to get our young talent used to winning baseball games.

Triple-A: Reno 14, Oklahoma City 9. (22-21) After Trevor Bauer and Aneury Rodriguez finished up a 2-1 pitcher's duel on Friday night, the Reno and Oklahoma City bats collectively decided that they needed to make up for the lack of offense on Saturday. Reno absolutely teed off against Oklahoma City starter Dallas Keuchel, who came into the night with a 2.09 ERA (13 ER allowed) in 56 innings of work. His earned runs total on the year nearly doubled in one night, as Keuchel gave up a staggering twelve runs across just four innings of work, seeing his ERA jump to 3.75 in one night. Meanwhile, Reno starter Joe Martinez got through six innings with just five earned runs allowed (an acceptable start in the PCL), but relievers Taylor Sinclair and Sam Demel each gave up two runs in their relief appearances.

Just about everyone contributed at the plate for the Aces. The star on the day was Konrad Schmidt, who had three hits, falling a triple short of the cycle, and a walk. Schmidt has had a rough start to the year, but the night single-handedly brought his line up from .257/.314/.376 to .274/.333/.425, which is quite close to his .280/.330/.445 line with Reno in 2011. Adam Eaton and Taylor Harbin each had three-hit days, while Rusty Ryal whacked a pair of doubles. Also doubling for Reno were Harbin, Cole Gillespie, and David Winfree.

Double-A (11 innings): Mobile 1, Jackson 2. (24-19) This game got off to a sour note for the BayBears when right-hander Chase Anderson made it through just two innings for Mobile, getting pulled before the start of the third. Not sure what happened to Anderson, who has dealt with elbow problems in the past, but I'll try to find out at some point over the next couple of days. With Anderson out, it fell upon the bullpen to keep this game a pitcher's duel, and the bullpen delivered. Relievers Eury De La Rosa, Eric Smith, Kevin Munson, and Matt Gorgen each worked two innings, with only Smith allowing a single earned run.

Unfortunately, the BayBears were unable to do anything against Jackson left-hander and top Seattle Mariners starting pitching prospect James Paxton or the rest of the Generals pitching staff, with Yazy Arbelo's solo home run coming as the only offensive output on the night. Out of available relievers, Mobile was forced to put infielder Daniel Kaczrowski on the mound for the bottom of the eleventh, and Kaczrowski allowed a walk-off home run to the first batter he faced.

Hi-A: Visalia 7, San Jose 5. (22-21) This game marked the Hi-A debut of right-hander Jeffrey Shields after his promotion from Low-A South Bend. Shields struggled with walks, giving up three free passes in six innings on the bump, but managed to keep the Rawhide in this game, allowing seven hits and four runs while striking out one and inducing eight ground ball outs. The offense took care of the rest, with three hits from Garrett Weber and a single and a double from Michael Freeman leading the way for the Rawhide bats. Oh, and Chris Owings drew another walk, soooooo... 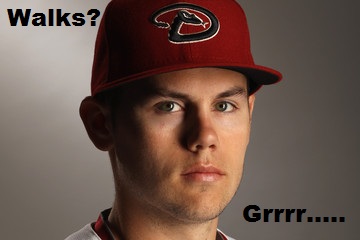 Low-A: South Bend 7, West Michigan 5. (23-20) Top prospect Archie Bradley allowed six hits in a single game for the first time this season (his previous high total was four, which he allowed on two separate occasions), which, along with his four walks over five innings, conspired to produce one of his "worst" outings of the season. I put "worst" in parenthesis because he allowed four runs over five innings, which is hardly a terrible outing, and his ERA rose to a still-incredible 2.80 on the year in 45 innings of work. Bradley struck out four and induced seven ground ball outs to round out his outing.

The bullpen and the offense picked up the right-hander. Willy Paredes, Keith Hessler, and D.J. Johnson combined to allow just one unearned run over four innings of relief, and the Silver Hawks received a stellar day at the plate from outfielder Tom Belza, who singled once and tripled twice. Ender Inciarte and Fidel Pena each doubled for South Bend, while Chris Ellison and Gerson Montilla each reached base three times, both on a pair of singles and a walk.