The History Of The Diamondbacks: Catcher

Share All sharing options for: The History Of The Diamondbacks: Catcher

The Diamondbacks haven't had an enormous amount of production out of the catcher's spot in their history, picking up a total of just 30 fWAR from there since the franchise started in 1998, which ranks them 11th in the National League. Last season was the first time in franchise history, we finished among the top four at the position. The bar was set relatively high, with 3.1 WAR in the team's debut season of 1998, most of it (2.3) coming from Kelly Stinnett. But it wasn't until last year that this overall figure woul be matched again, with Miguel Montero's full-on breakout year.

Let's take a look at the history of the men behind the mask for Arizona.

The chart below is perhaps the easiest visual way to see the history of the catcher's position for the Diamondbacks. It shows a colored box for every player who appeared in at least ten games there for a given year, and the darker the box, the more playing-time they got.

Looking at this, we can divide team history into the following eras

1998-2000: The Stinnett-Miller tandem
Both men were Diamondbacks' picks in the expansion draft which provided the team with much of their initial roster: Miller from the Twins, Stinnett from the Brewers. Together, they provided the team with one of its greatest periods of stability: for the first three years in the desert, they combined to play just about every day. Duties over that time were split almost equally, Stinnett having ten more at-bats than Miller. While both were competent, neither were outstanding, Miller posted 4.5 WAR, Stinnett 3.5 WAR over those three years.

2001-2002: Arizona's Glory Years
Stinnett left as a free-agent at the end of 2000, and undrafted free agent Rod Barajas came on as the main backup. It's probably safe to say Arizona won the World Series despite Barajas, rather than because of him. Fortunately, Miller did the bulk of the heavy lifting, starting 111 games in the regular season, then all but one of the 17 post-season contests (the exception being Game 5 of the World Series in New York). He was just as reliable as the Diamondbacks repeated in the NL West the following season, but was dealt to the Cubs that winter, for a couple of no-name minor-leaguers.

2003-2005: The Age of Replacement Level Catching
As the chart below shows, the loss of Miller ushered in a dark era for the D-backs, with no regular starter round whom the team could build. Over these three seasons combined, Arizona catchers were worth a total of only 1.5 fWAR combined, and the position was a revolving door. That was particular the case in 2004, where six different players started games (anyone remember Bobby Estalella?), with Juan Brito most-used, but only in that line-up 53 times. 2005 even saw the return of Stinnett, now a crusty veteran at age 35. That season also saw the arrival of our second-round pick in 2002, who took over as the everyday incumbent. 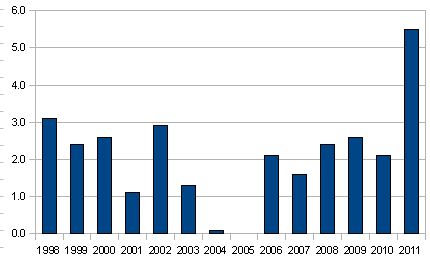 [Catcher fWAR for the Diamondbacks over their history]

2006-2009: Snyderman Flies, Comes Undone
Right up there with Conor Jackson in freakish trauma is Chris Snyder, who took a foul ball to the groin in the last game of July 2008, and was never the same player again. Turns out that "broke" a career which had been so promising, the Diamondbacks gave Snyder a three-year, $14.25 million contract extension the winter after his injury. However, he hit at the Uecker Line in 2009, and that was his final year in Arizona, as the team salary dumped him on the Pirates the next season. That decision was, in part, because of the arrival of someone younger, cheaper and apparently, significantly better.

2009-date: The Microwave Turns Up The Heat
The fall of Snyder overlaps with the rise of Miguel Montero. He had been the preferred catcher in 2009, but was troubled by a knee issue the following season, and the surgery needed limited him to 75 starts, with Snyder and John Hester filling in for the balance. There was no such issue in 2011, Montero delivering the best season by a catcher in Diamondbacks history, and being rewarded with the team's first All-Star at the position since Bob Melvin picked just about everyone off the Diamondbacks in 2002. Henry Blanco proved a capable backup, and the pairing are there again for Arizona in 2012.

The future.
I doubt there's a spot on the diamond with a bigger questionmark than this for the Diamondbacks. Montero is a free-agent at the end of this year, and contract negotiations ended in spring training, with the sides apparently far apart in terms of money. There is a dearth of prospects in the minor-league system too, and it seems that the most likely scenario involves Arizona trading from their pitching stockpile to get a good, young catcher, who will be under team control for the long term. Working on such a deal, and getting good value, will be one of the more challenging tasks for Kevin Towers and his crew this off-season.