Share All sharing options for: Diamondbacks Thing Of The Week: Trevor Bauer Not-Lego 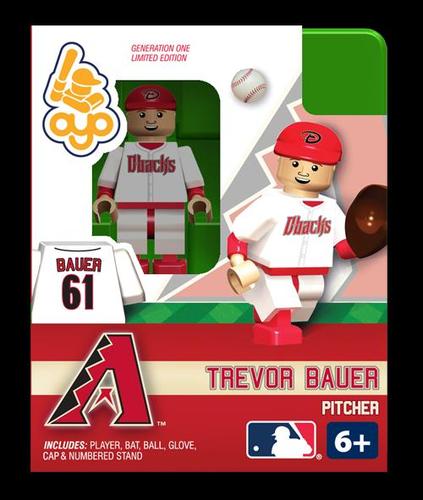 Trevor Bauer is now a Triple-A pitcher, and if his outings go like the one he had last night, it doesn't seem likely that he'll be in Reno for very long. But to mark the occasion, here's something no collector of Bauermabilia could possibly do without.

Collect your favorite players. It's like a 3-D baseball card!

OYOs are designed with eyes, ears, nose, mouth, and other facial characteristics that best represent their real life counterparts! Unique ball design snaps onto hand and allows your OYO to grip and throw. Glove pocket is perfectly sized to hold ball, allowing your OYO to snag the deepest pop fly! Batters have bats that snap easily onto hands and rotates into position. Batter hands snaps easily onto hands and rotates into position. Specially designed, rotating forearms for sports figures to allow for action! Pitch, catch, and bat. Without knees that bend, you walk like a mummy! Additional joint allows OYO to run, sit, squat, and wind-up.

OYO DNA Number - Printed right on the stand is your OYO's very own unique DNA number. This number can be used to identify your OYO. Look out for special membership offers where you can use your OYO's DNA to "Play"!

Each OYO comes with their own stand, which lets you position and pose your OYO for display on any flat surface. Or, snap your stand onto a building block grid and build your own scenes!

OYOs play nicely with other toys! OYOs are compatible with other name brand building blocks, so your OYOs can become part of your favorite scene. We encourage you to build and play!

I was originally just going to do "Trevor Bauer's five most expensive trading cards," but I found this instead, which is a great deal more a) affordable, at $12.50 plus shipping and b) awesome. There are not in any way affiliated with LEGO (TM), but the idea came out of the mind of baseball fan Tom Skripps. whose company operates out of Acton, MA. They launched late last year, with a World Series line, but branched out this spring with a range of figures covering all 30 teams.Bauer is certainly not the only D-back available, though is the only one who is not an established member of the major-league roster.

There are 16 OYOs available in total, including Bauer, the DL'd Stephen Drew and a generic "00" figure, so it's slightly quicker to list those on the 25-man squad not for sale in a plastic, poseable format. Josh Collmenter, Wade Miley, Patrick Corbin, Joe Saunders, Willie Bloomquist, John McDonald, Henry Blanco, Cody Ransom, Craig Breslow, David Hernandez, Bryan Shaw and Mike Zagurski.Yes, you too can get a Jason Kubel OYO figure: I'm pretty sure the comments will include suggestions that the figure will have a better UZR this season. It's also not clear quite how far the Drew OYO's ankle will bend.

All snark aside, the toys are the same size as those L*go ones, and come packaged with a bat, ball and glove — all interchangeable, which is a good thing, given the packaging on the Gerardo Parra figure, for example, has his glove on the wrong hand! It's possible these could become collectible. Skripps said, "We produce many of the players in small runs, so there may only be 100 or 200 of some players out there. As players get traded or change names like Mike Stanton [now known as Giancarlo Stanton], we stop production and they [may] become very rare as well."

That may be the case with the Bauer figure, as it seems unlikely he'll be wearing #61, as shown, when he reached the major-leagues. In Reno, his uniform number is 17, and that would seem to be available, since it was last worn on the Diamondbacks by Robbie Hammock - and probably most famously by Brandon Webb. I would thoroughly endorse him retaining it when he gets promoted, since my AZ Snakepit jersey bearing the number would instantly go from being retro and mournful, to cutting-edge and trendy. In the meantime, however, you can sweep up Bauer in his #61 version, and put it in a safety-deposit box for your grandchildren.