Diamondbacks 5, Dodgers 1: 3 Minutes With The Buzzsaw

Share All sharing options for: Diamondbacks 5, Dodgers 1: 3 Minutes With The Buzzsaw

Today, The Demolisher Wade Miley goes head-to-head with his arch enemsis The Buzzsaw Chad Billingsley. Will Miley prevail against Billingsley's nefarious schemes will Bloomquist once again be the damsel in distress? Or will Justin Upton go Hulk and destroy Billingsley? Find out in Diamondbacks 2012, Issue #37.

Gerardo Parra led off the game with a pop up; after that Bloomquist comes to the plate and a regular miracle occurs and Willie singles to left field on a ground ball but, just as soon as the magic struck, it left and both Justin Upton and Miguel Montero Popped up to end the first half of the inning. The Dodgers are now up. Dee Gordon strikes out on 3 straight pitches looking. Considering his walk up music is "On To The Next One" that seems quite fitting. Mark Ellis singles, then Scott Van Slyke grounds out and Ethier strikes out on a foul tip to end the inning.
Jason Kubel leads off the second inning by mashing a double to left with authority. Ryan Roberts and Lyle Overbay strike out. Wade Miley reaches base on a dropped third strike and barely beats out the throw and is called safe. I love seeing this kind of hustle out of a pitcher. Now for some strange reason Billingsley proceeds to intentionally walk Aaron Hill which loads the bases after this he walks Parra and Jason Kubel scores on the bases loaded walk. 1-0 Diamondbacks WIllie Bloomquist flies out to center on 3-1 pitch that was inside; in a futile attempt to try and be Josh Hamilton, ending our half of the second inning.
The Dodgers half of the second was pretty uneventful with a strikeout, a single by Jerry Sands and a grounder to second for a double play to end the inning. Pretty quick top of the 3rd too. Justin flew out and Montero and Kubel grounded out in the top half of the inning. Dee Gordon and Mark Ellis get a couple of two out singles. but Scott Van Slyke grounds out to end the inning.
Ryan Roberts singled on a ground ball, which is immediately undone by Lyle Overbay who grounded into a double play. Aaron Hill then struck out on what I think was a really iffy strike 3. Wade Miley hits Andre Ethier in the elbow with the first pitch thrown in the bottom of the fourth. A. J. Ellis grounds into a double play almost immediately and Jerry Sands strikes out on three straight pitches.
Now this is where things get exciting. Wade Miley singled on a line drive to left to lead off the inning. Parra drives a single into center. Willie Bloomquist somehow conjures up another miracle and dumps a single to left, so now the bases are loaded. Justin Upton hits an infield single that drives in Wade Miley and then Miguel Montero drives another single to center field, which sends Parra home, and that will take Billingsley out of the game. Chad Billingsley is replaced by former Dodgers closer Javy Guerra.
Kubel hits what feels like the 80th single to score Willie Bloomquist. It looks like Willie has cast a miracle on most of the party this time. Ryan Roberts crashes the party by grounding into a double play and Aaron Hill grounded into a force out to end this half inning. Still, the Diamondbacks are now up 4-0, and Wade Miley gets 3 quick outs in the bottom of the fifth to end the inning.
Not much goes on here in the top of the 6th. Miley and Parra make two quick outs Bloomquist decides to have a career day and gets his third single. Justin lines out to end the half inning. Not much happens in the bottom half of the 6th either, other than Mark Ellis' solo home run. Miggy leads off the seventh with a single to left. Jason Kubel walks and Ryro singles to center and the bases are loaded. Lyle Overbay sac flies and Montero scores making it 5-1 Dbacks. That's it for this half.
Wade Miley gets two outs but allows a couple of hits too, and is replaced by Bryan Shaw who gets the third out. Willie walks to get on base for an astounding (for him anyways) fourth time this game but, inevitably, gets caught stealing. Justin walks and Miggy grounds out to end the inning. Van Slyke and Ethier quickly make two outs. A.J. Ellis continues to have a good night and singles, before Jerry Sands strikes out.
In the ninth, Kubel flies out and Ryro Strikes out - after Overbay hits a single Hill Strikes out. J.J. Putz replaces David Hernandez, in a non-save situation. James Loney and Justin Sellers quickly fly out. Adam Kennedy doubles and then Dee Gordon pops out to end the game. Diamondbacks win 5-1 and as Dee Gordon likes to say "It's on to the next one." in Colorado where Pat Corbin goes against Jamie Moyer. 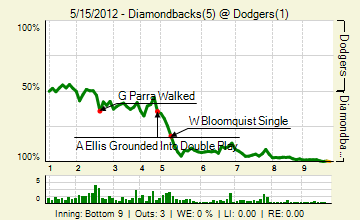